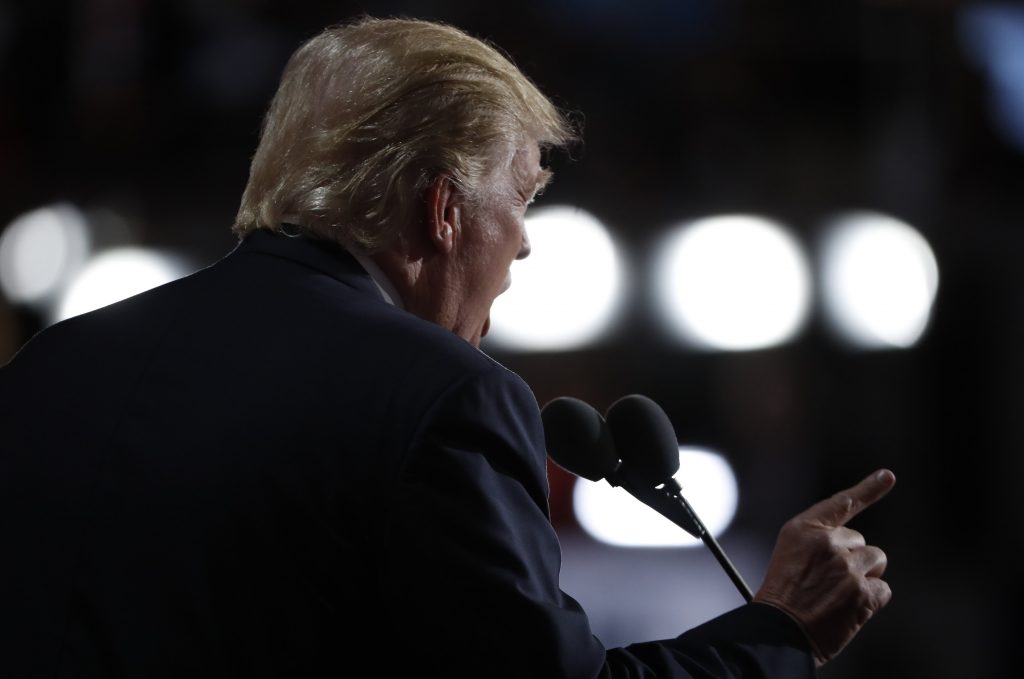 Editor’s Note: On Thursday, Aug. 18, at 5 p.m. EDT, the PBS NewsHour along with the Hutchins Center for African and African-American Research will present a special forum on “Race & the Race to the White House.” Author Mychal Denzel Smith will join in a live chat during the forum on Twitter. You can watch live and join in the discussion here.

During the 2012 presidential race, Republican South Carolina Sen. Lindsey Graham quipped, “We’re not generating enough angry white guys to stay in business for the long term.” The 2016 election cycle is essentially a last ditch effort by the Republican party to find out whether or not that statement is true.

In nominating Donald Trump as its presidential candidate, the party opted for an explicit appeal to the disaffected, aggrieved white male class that it had courted before in less brusque language. For decades, they adopted, honed, and mastered the “Southern Strategy” pioneered during the Richard Nixon era, which Lee Atwater so eloquently described in 1981:

“You start out in 1954 by saying, ‘N—-r, n—-r, n—-r.’ By 1968 you can’t say ‘n—-r’—that hurts you, backfires. So you say stuff like, uh, forced busing, states’ rights and all that stuff, and you’re getting so abstract. Now, you’re talking about cutting taxes and all these things you’re talking about are totally economic things and a byproduct of them is, blacks get hurt worse than whites. ‘We want to cut this,’ is much more abstract than even the busing thing. And a hell of a lot more abstract than ‘N—-r, n—-r.’”

They may not be back to saying “n—-r, n—-r, n—-r,” but when Trump spends time talking about needing to build a wall because Mexico is sending criminals and rapists over our border, and banning Muslims from entering the country, we are witnessing a modern day version of those explicit appeals to a naked racism and xenophobia that has recently found its voice in mainstream American politics again.

To ‘make America great again’ is to reestablish the natural order of white male supremacy and dominance.

It’s a play at the most basic fears of a group of people who have been primed to believe that the reasons for their economic precocity is the existence of “others” who threaten the American way of life. To “make America great again” is to reestablish the natural order of white male supremacy and dominance.

This feels uniquely frightening if you believe that Trump and his supporters represent something unprecedented. But they are neither unprecedented nor are they the last vestiges of some archaic form of politics that we will eventually leave behind. In reality, Trump is the inevitable reaction to American progress.

It isn’t to suggest that America has done everything it needs to do in terms of establishing equality and justice — every time a police officer guns down another black person we are reminded that isn’t true. But what we can say is that in terms of representational politics, we are living through a period that may have been unthinkable in past eras. A nation that once captured, imported and enslaved African people in order to exploit their bodies for the production of wealth, has seen fit to elect to be president — twice — a person who once would have fit that description. It’s insufficient, but certainly not unremarkable.

However, progress was never going to move forward unimpeded. Progress in this country is not inevitable. It is the result of generations of people willing to sacrifice their lives to dismantle, or at least dramatically alter, systems of oppression. It takes a moral courage to assert one’s humanity in the face of American cruelty that isn’t often successful. What is inevitable is that when the country makes any bit of progress toward actualizing the ideals located in its founding documents, there will be a backlash.

In her recent book, “White Rage,” Carol Anderson lays out several different periods of progress made and then subsequently undone by the retrenchment of white supremacy. The end of chattel slavery was met with the convict-leasing system, which in effect re-enslaved a population through the enactment of racist laws that criminalized black people’s existence, sending them back to the very plantations from which they had been granted freedom.

This feels uniquely frightening if you believe that Trump and his supporters represent something unprecedented….In reality, Trump is the inevitable reaction to American progress.

The end of legalized segregation in schools was greeted with court battles around states’ rights, school closures and the slashing of budgets that would ensure black children would continue to receive inferior educations. The election of President Barack Obama set off a wave of voter disenfranchisement laws across the country, most heavily concentrated in the very same states that once violently defended the ballot box from black votes.

Come November, the country will decide whether or not it wants to signal the backlash against this modern era of progress in the most dramatic fashion, by electing a wholly unqualified man who traffics in white nationalist rhetoric to serve as commander-in-chief. But even if we decide against that, it will not be the end of the backlash.

Rather, what Trump and his supporters have done is prepare us for a new era in which someone could come along, in less harsh language than Trump, and appeal to those very same angry white guys, but in a way that also garners support from the more “respectable” elements of American society. It has happened before. We are not immune to it happening again.

This column is the third in a five-part series related to the 2016 Hutchins Forum on Race and the Race to the White House.

Check out all the columns in this series by clicking here.

Mychal Denzel Smith is the author of Invisible Man, Got the Whole World Watching: A Young Black Man's Education, and a Knobler Fellow at The Nation Institute.