Watch the State of the Union

6 charts on the State of our Union 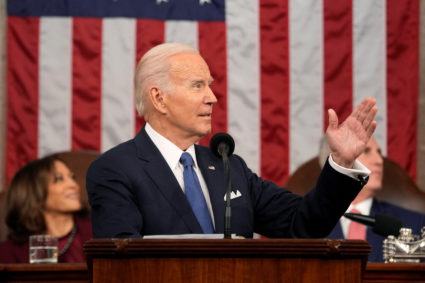 Hours before his first State of the Union, President Donald Trump said Tuesday that he wants to unite the country amid “tremendous divisiveness” and hopes he can do so without a traumatic event affecting Americans.

Trump spoke about creating a more united country during a lunch with a number of television news anchors. Trump said the United States has long been divided, including during the impeachment of former president Bill Clinton. Trump also said that Americans usually come together during times of suffering.

“I would love to be able to bring back our country into a great form of unity,” Trump said. “Without a major event where people pull together, that’s hard to do. But I would like to do it without that major event because usually that major event is not a good thing.”

The president also said the country’s divisions date back to both Republican and Democratic administrations, citing the scandals that led to Clinton’s impeachment by the House in 1998.

“I want to see our country united. I want to bring our country back from a tremendous divisiveness, which has taken place not just over one year, over many years, including the Bush years, not just Obama.” he said.

The comments came as the president was putting the finishing touches on his first State of the Union address Tuesday night.

According to a White House official, Trump’s speech will be about 50 minutes long, and was written with help from H.R. McMaster, the national security advisor, Rob Porter, the White House staff secretary, Gary Cohn, the chief economic advisor, Stephen Miller, the senior policy advisor, and Ross Worthington and Vince Haley, who are both speechwriters.

Left: President Donald Trump presides over a meeting about immigration with Republican and Democratic members of Congress in the Cabinet Room at the White House on Jan. 9. Photo by Chip Somodevilla/Getty Images