In addition, the president will “take all actions necessary and appropriate to review and approve in an expedited manner.”

The memorandum also goes on to issue personal support for the multi-billion dollar crude oil pipeline.

Trump said he plans to “renegotiate some of the terms” of the controversial pipelines but did not answer further questions on how he plans to advance the project, according to the Associated Press.

Trump's executive order on #DAPL–violates the law and tribal treaties. We will be taking legal action. #standwithstandingrock #noDAPL pic.twitter.com/0DXeZ7RtQN

Protesters began to rally outside the White House early this evening. Another protest was scheduled for 6 p.m. outside of Trump Tower in New York.

President Barack Obama halted work on Keystone XL, which would run across the Canada U.S. border and, therefore, required presidential approval, in 2015 after an outcry from environmental groups.

Those opposed to the project said it would boost extraction from Canada’s oil sands, a process that emits 14 percent more greenhouse gases than other forms of oil production. They also argued constructing a new oil pipeline would diminish America’s role as a global leader of climate change.

For months, Native American groups and their supporters also protested the Dakota Access pipeline being laid a mile from the Standing Rock Sioux Reservation and underneath the tribe’s main source of drinking water. 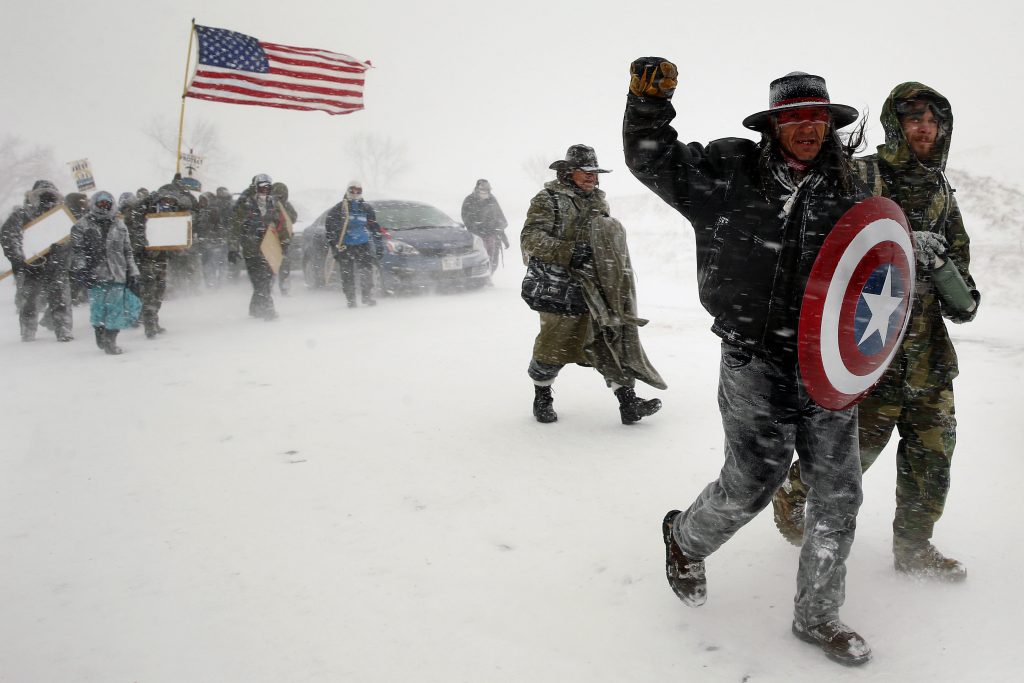 Veterans join activists in a march to Backwater Bridge just outside the Oceti Sakowin camp during a snow fall as “water protectors” continue to demonstrate against plans to pass the Dakota Access pipeline adjacent to the Standing Rock Indian Reservation, near Cannon Ball, North Dakota, U.S., December 5, 2016. REUTERS/Lucas Jackson/File Photo

In response, Obama ordered a comprehensive environmental review of the Dakota Access pipeline before the its final section could be built. The Army Corps of Engineers also agreed to look for alternative routes.

Trump on Tuesday said he wanted to expedite such environmental reviews.

“The process is so long and cumbersome that they give up before the end. Sometimes it takes many, many years and we don’t want that to happen,” Trump said.

“The process is so long and cumbersome that they give up before the end. Sometimes it takes many, many years and we don’t want that to happen.”

The president also signed an order mandating pipelines built in the U.S. use American steel.

Opponents of the pipelines immediately criticized the president’s actions.

“The executive orders demonstrate that this administration is more than willing to violate federal law that is meant to protect indigenous rights,” Dallas Goldtooth, an organizer with the Indigenous Environmental Network, said in a statement. “These attacks will not be ignored, our resistance is stronger than ever before and we are prepared to push back at any reckless decision made by this administration.”

Until last year, Trump owned a small amount of stock in Energy Transfer Partners and at least $100,000 in Phillips 66, an energy company that owns one-quarter of the Dakota pipeline, according to the Associated Press. A spokesman told the AP that Trump sold the shares last year as part of a “wide-ranging stock divestment.”

Trump’s cabinet picks have signaled he will take a friendly approach to oil companies. Rick Perry, Trump’s choice for Energy Secretary, sat on the board of Sunoco Logistics and Energy Transfer Partners, the two pipeline firms funding Dakota Access.

The president also selected Exxon CEO Rex Tillerson as his secretary of state, and his nominee for Interior Secretary, Rep. Ryan Zinke, has voiced his support for the Keystone XL pipeline.

PBS Newshour will continue to cover this story as it develops.