WASHINGTON — Eager to jump-start the stalled Keystone XL oil pipeline and other energy projects, President Donald Trump has acted to assert executive power over pipelines and such infrastructure.

He issued a new permit for Keystone XL and insisted this exercise of presidential authority was not subject to judicial review. Then he signed an executive order clarifying that the president alone has the power to grant permits for cross-border projects such as pipelines. A separate order makes it harder for states to block pipelines and other energy projects on the basis of environmental concerns.

Taken together, the actions amount to a broad assertion of power that reverses more than 50 years of precedent that delegated decision-making on energy projects to individual agencies.

Trump has shown a willingness to override his own agencies to accomplish his aims. His actions, if upheld by the courts, could consolidate power over energy projects at the White House, increasing the influence of the president’s political advisers and potentially cutting out experts and career officials throughout the government.

“Too often badly needed energy infrastructure is being held back by special interest groups, entrenched bureaucracies and radical activists,” Trump said Wednesday before signing the executive orders at an event in Texas.

Pipeline opponents say Trump acted illegally. They have asked a federal court to block the new Keystone permit, arguing that it is an effort to get around an earlier court ruling.

But one legal expert said Trump’s approach might succeed.

If the courts follow a 1992 Supreme Court ruling, they may find that action taken by the State Department in approving or rejecting the pipeline “is nonreviewable, because it doesn’t qualify as final agency action,” Pierce said. Further, Trump’s decision would not be subject to review because of a separate law that declares the president is not an agency and therefore is not bound by rules that apply to agency actions.

Trump’s actions are “typical of this presidency,” said Holly Doremus, an environmental law professor at the University of California, Berkeley. She said Trump frequently seeks to stretch the limits of his power, and she cited Trump’s declaration of an emergency that he says allows him to shift more money to construction of a promised wall along the U.S.-Mexico border.

In the case of Keystone, Trump appears to be arguing that the new presidential permit, issued March 29, gets around restrictions under the National Environmental Policy Act or other laws, because the statutes apply to executive-branch agencies but not to the president, Doremus said.

“If the president is the only discretionary decision maker, NEPA simply does not apply,” she said.

While Trump’s theory is plausible, it is unclear who is the ultimate decision-maker on Keystone XL, Doremus said. The pipeline would ship crude oil from the tar sands of western Canada to U.S. refineries along the Gulf of Mexico.

Both a 2015 rejection of the project by the Obama administration and a 2017 approval by Trump were issued by the State Department under terms of a 2004 executive order that delegated presidential authority for cross-border projects to that agency.

“It’s surprising that the president would come in and single-handedly try to circumvent 50 years of precedent for these types of projects by just issuing a permit himself,” said Doug Hayes, a Sierra Club attorney who has sued to block the Keystone project in court.

In November, U.S. District Judge Brian Morris in Montana ruled that the Trump administration did not fully consider potential oil spills and other impacts when it approved the pipeline in 2017. Morris ordered a new environmental review of the pipeline.

The White House said the new permit issued by Trump “dispels any uncertainty” about the long-delayed project, which was first proposed a decade ago by Calgary-based TransCanada.

Trump’s move on Keystone XL reinforces the idea that “the presidential permit is indeed an exercise of presidential authority that is not subject to judicial review,” according to the White House. 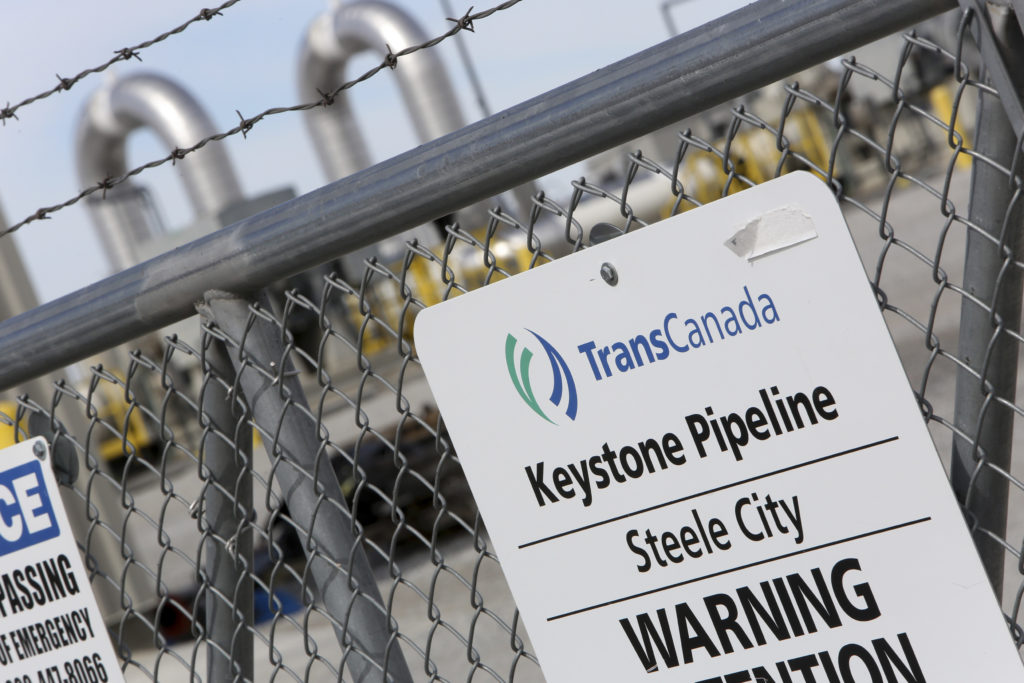 Under the new order, federal officials still would conduct environmental reviews of the project, but they would be carried out by agencies other than the State Department, the White House said.

TransCanada spokesman Matthew John said the administration’s action “clearly demonstrates to the courts that the permit is (the) product of presidential decision-making and should not be subject to additional environmental review.”

Carl Tobias, a law professor at the University of Richmond, said it was “strange” that Trump issued the executive order after granting the new permit.

“The White House is making the argument supposedly that he has untrammeled authority and doesn’t have to obey the laws of Congress” in approving a cross-border pipeline, Tobias said. “I’m dubious and I think a number of other people are, too.”

Kathryn Watts, a law professor at the University of Washington, said it’s unclear what happens next. Trump’s permit wades into “uncharted, unsettled” legal territory, she said.