Trump won key union workers in 2016. Will Scalia as labor secretary change that for 2020?

To critics, the nomination of a labor secretary who built his career fighting unions underscores President Donald Trump’s attacks against organized labor.

But for Trump, it seems appointing Eugene Scalia is a way to continue taking on unions through deregulation and business-centric policies without alienating rank and file union members in key states he’ll need to win reelection in 2020.

The president’s pick, which he announced on Twitter in July and officially nominated Tuesday, also shows Trump’s willingness to push the boundaries on who makes a suitable labor nominee, compared to past Republican administrations.

In the past, “Republicans tended to choose businessmen” to lead the Department of Labor, said Joseph McCartin, a labor historian at Georgetown University. “Often they were businessmen who had dealings with unions. But [they] were not anti-union.”

Scalia, the son of the late Supreme Court Justice Antonin Scalia, appears to be a departure from that norm.

Scalia is a partner at the Washington, D.C.-based law firm Gibson Dunn, where he focuses on labor and employment issues. As an attorney, he has worked on behalf of Walmart, Ford, UPS and a host of other companies in lawsuits fighting against workers’ rights claims. He also served a brief stint as the Labor Department’s solicitor in 2002.

Some union leaders argued Scalia is also more extreme than Trump’s past appointments for the cabinet position. Scalia is Trump’s third pick for labor secretary. Businessman Andrew Puzder withdrew from consideration after it was reported that he had hired an undocumented immigrant as a housekeeper. Former prosecutor Alex Acosta served as labor secretary for two years before resigning earlier this month after coming under scrutiny for his role in a 2008 plea deal for financier Jeffrey Epstein, who is facing charges of sex trafficking.

“The mission of the Labor Department is to ‘foster, promote and develop the welfare of wage earners, job seekers and retirees.’ But President Trump has appointed one corporatist after another to head the agency. And Trump’s new nominee, Eugene Scalia, is one of the worst yet,” United Steelworkers Vice President Roxanne Brow said in an emailed statement.

Scalia has faced opposition before. In 2002, President George Bush was forced to nominate Scalia to the role of Labor Department solicitor during a congressional recess because he could not gain enough Senate support following Scalia’s initial nomination a year earlier.

Democrats opposed Scalia’s first nomination in 2001 because of his record opposing workers’ health and safety regulations, including the so-called “ergonomics rule” that aimed to reduce worker injuries due to repetitive motion. The Clinton-era rule was repealed by Congress in 2001, and many credited Scalia with its demise. 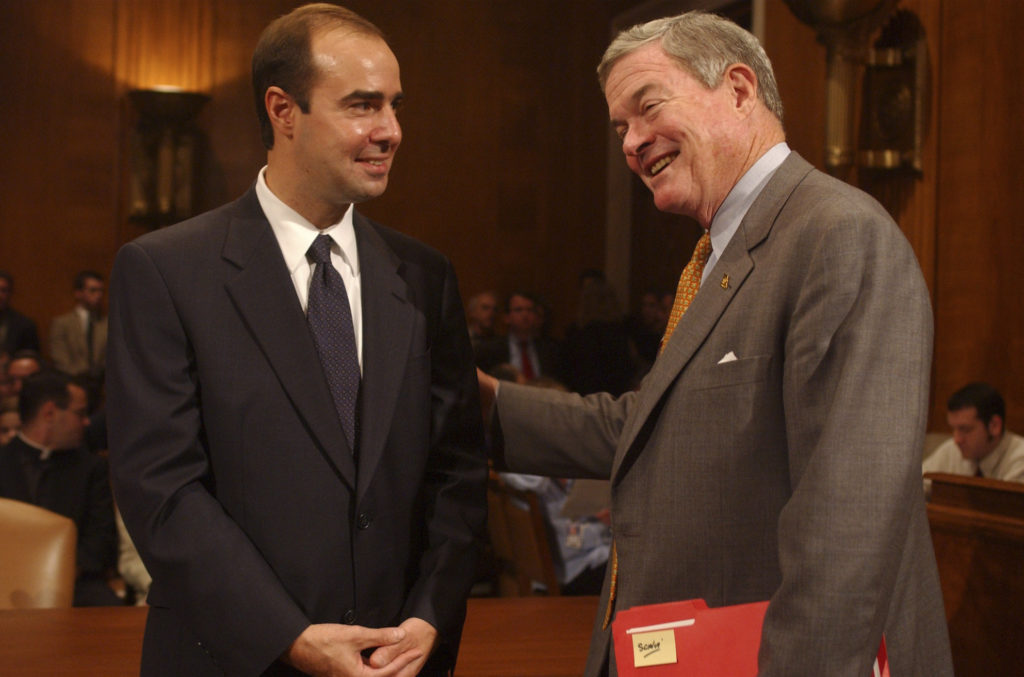 Now, Democrats are raising many of the same concerns.

“After spending the last 18 years defending corporations who have trampled on the rights of their workers, he is still the wrong choice and President Trump needs to choose another nominee for Secretary of Labor,” Sen. Patty Murray, D-Wash., who also opposed Scalia’s 2001 nomination, said in a statement earlier this month.

Scalia’s supporters argued the fears about his record are overblown. People who have worked with him argued that he defended corporations in the past because that was his job at the time. If he becomes the Labor Department secretary, Scalia would have a new job enforcing employment and safety standards for American workers, said Chris Spear, who worked with Scalia at the Department of Labor.

“People should be really careful not to quickly condemn,” said Chris Spear, now the president and CEO of the American Trucking Association. Scalia “understands the dynamic between the employer and employee relationship. He’s respectful of the law and adherent to it.”

Spear argued that Scalia’s time at the Labor Department showed he was not anti-union. As solicitor, Scalia wrote a legal opinion arguing employers should compensate their workers for the time it took to put on safety equipment. In 2005, the Supreme Court, which included Scalia’s father, later unanimously ruled in favor of that argument.

At the same time, the Bush administration opposed labor unions in many other respects, including by requiring unions to increase financial reporting and by tightening restrictions on investigating employee complaints.

How Scalia could change labor regulations

Much of the Labor Department’s work is focused on writing detailed regulations that companies must follow, then enforcing those rules when businesses do not comply.

As labor secretary, Scalia could determine how, and to what extent, rules protecting workers are enforced. He could also move quickly to finalize regulations currently in limbo.

“When there are clearer standards, it is easier to avoid violations and easier to enforce the rules,” said Paul deCamp, a lawyer at Epstein Becker Green and former administrator of the Department of Labor’s Wage and Hour Division. 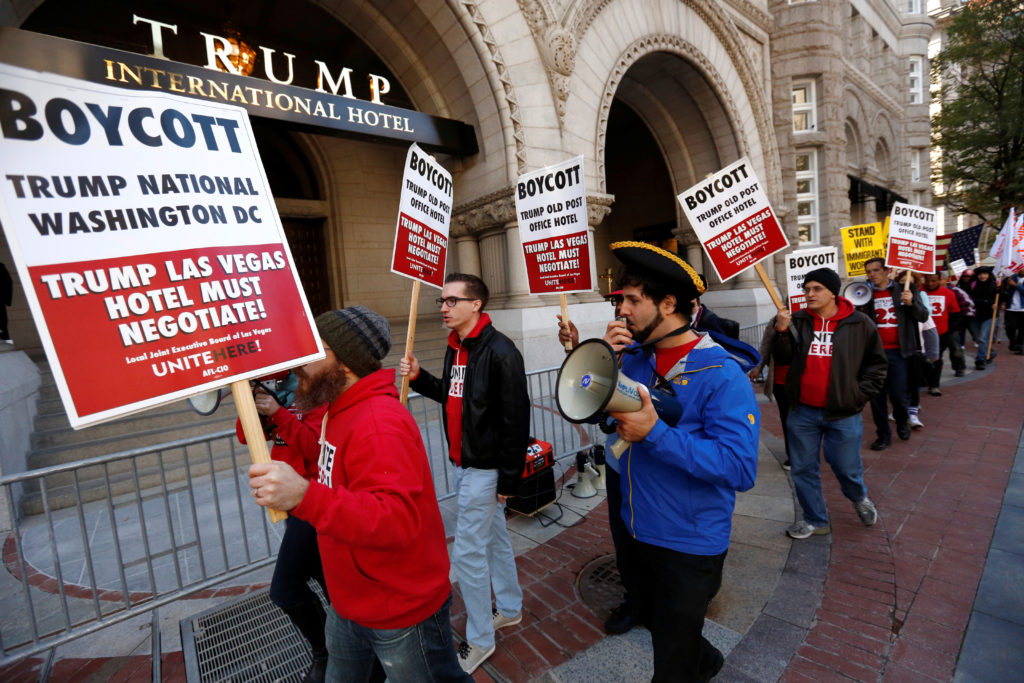 Representative of the AFL-CIO labor union protest against Republican U.S. presidential nominee Donald Trump on the sidewalk outside of the grand opening of his new Trump International Hotel in Washington, D.C. Even as labor unions have opposed Trump, many of their members support the president. October 26, 2016. Photo by Jonathan Ernst/Reuters

Scalia would also oversee the Labor Department’s recent efforts to loosen restrictions on apprenticeship programs. While the move is aimed at getting more people to consider apprenticeships as an alternative to college, critics have said it could backfire if the looser regulations lead to more relaxed standards and poor performance by apprentices.

“Once you don’t have a credible certifying body, it loses its credibility and turns itself into a kind of internship,” said Susan Schurman, a labor studies professor at Rutgers University.

Whatever the issue, Scalia’s legal background could influence his approach to rules that are likely to be challenged in court.

“What the business community wants is certainty in department rules that, when challenged, in court will hold up. We need to have somebody like Scalia who knows how to create an agency ruling and to make it bulletproof,” said Brandon Scholz, the president and CEO of the Wisconsin Grocers Association and a Republican political strategist.

While some labor unions have immediately opposed Scalia’s confirmation, others are taking a more cautious approach, saying they will watch the confirmation process for signs of how Scalia might lead the Department of Labor.

The nomination fight could factor into 2020 presidential election politics as well. A substantial portion of labor unions’ members voted for Trump in 2016, attracted by his promise to bring back jobs to Midwest manufacturing towns and other hard-hit parts of the country. Exit polls showed a larger share of union households voted for Trump than any president since Ronald Reagan.

But some labor union supporters said that as president, Trump has proven that he is not looking out for average Americans.

“Trump made a lot of promises to workers and he has [spent the first] years of his administration breaking those. Scalia is another broken promise,” said Karla Walter, the head of the American Worker Project at the liberal-leaning Center for American Progress.

If Democrats and labor unions paint Scalia’s appointment as another example of Trump’s attack on workers, it could erode the president’s support with rank and file union members in key Midwestern states like Ohio, Michigan and Wisconsin. 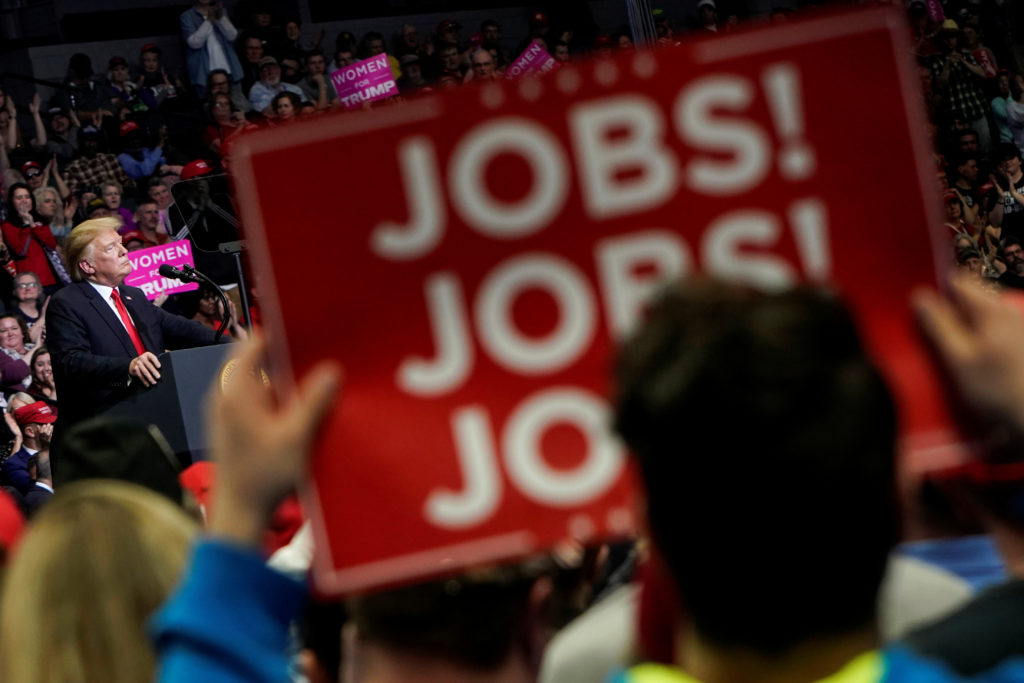 President Donald Trump speaks at a campaign rally in Grand Rapids, Michigan, March 28, 2019. Many Trump supporters say he has their support because of his economic policies. Photo by Joshua Roberts/Reuters

But unions have also lost much of their power over the years as membership rates have continued to decline. About 10.5 percent of workers were members of unions in 2018, down from 20 percent in 1983. A number of factors have contributed to that decline, including the decline in manufacturing jobs and federal and state policies that have made it more difficult to unionize.

By appointing Scalia, Trump appears to be betting that he can continue to bypass labor unions and bring his message directly to working class voters through rallies, media appearances and Twitter.

“Trump really hit a nerve that people felt left out and forgotten about,” said Ron Bonjean, a political strategist with ROKK Solutions. “That should have been a message that the labor unions used to grow their ranks. Instead, Trump was able to hijack it.”

Trump routinely criticizes unions, arguing that they take members fees but don’t fight for workers’ best interests. He has claimed his trade policies, such as the renegotiation of the North American Free Trade Agreement and tariffs on China, are benefiting American workers, contradicting many economists who believe Americans are bearing the cost of Trump’s international trade battles.

Mark Glyptis, a union leader in West Virginia, said he had more pressing issues to focus on than Scalia’s nomination.

“I don’t think the nomination, at this point, of time is a pivotal issue of concern,” said Glyptis, the president of the United Steelworkers Union Local 2911 in Weirton, West Virginia. “What is important to me is my plant, that my steelworkers have jobs, that we have long-term job security for our families.”