The House impeachment inquiry has brought most legislative work in Congress to a halt, except for one issue — judicial nominations.

Despite the turmoil surrounding the impeachment process, Senate Republicans have continued making steady progress filling the federal bench, bolstering President Donald Trump’s record on what is regarded as a key issue for Republican voters, and one that could play a significant role in the upcoming presidential election.

“Trump’s impact on the federal judiciary has been profound,” said Paul Butler, a professor at Georgetown Law and former federal prosecutor. “If there’s a contest about the future of law, of judicial interpretations, Republicans have won.”

The number of judges Trump has appointed at this point in his presidency is in line with the appointments made by some of his predecessors. But Trump’s appointees will likely play an outsize role in reshaping American law, due to their age and the length of time they can serve on the bench.

Through late October of their third year in office, Presidents George W. Bush and Bill Clinton had also appointed more than 150 federal judges, respectively. Every president dating back to Ronald Reagan appointed at least 100 judges at a similar juncture in their first term.

And 24 percent of circuit court judges are now Trump appointees — a number that will grow in the next year, and could increase if the president wins a second term.

Trump’s impact on the judicial system is perhaps most visible at the Supreme Court, which now has a conservative five-member majority with the recent additions of Gorsuch and Kavanaugh. But the nation’s highest court typically only hears between 70 and 90 cases a year. In contrast, lower federal courts hear thousands of cases each year, said Sanford Levinson, who teaches at the University of Texas at Austin Law School.

Advocates on both sides of the debate over abortion are also bracing for a renewed fight .

Earlier this month, the Supreme Court agreed to hear a case on a Louisiana law that would require doctors who perform abortion services to have admitting privileges at hospitals near where they work. Critics argue the law would restrict access to safe, legal abortions in the state. It’s the first major abortion case since Trump’s Supreme Court nominees joined the court. 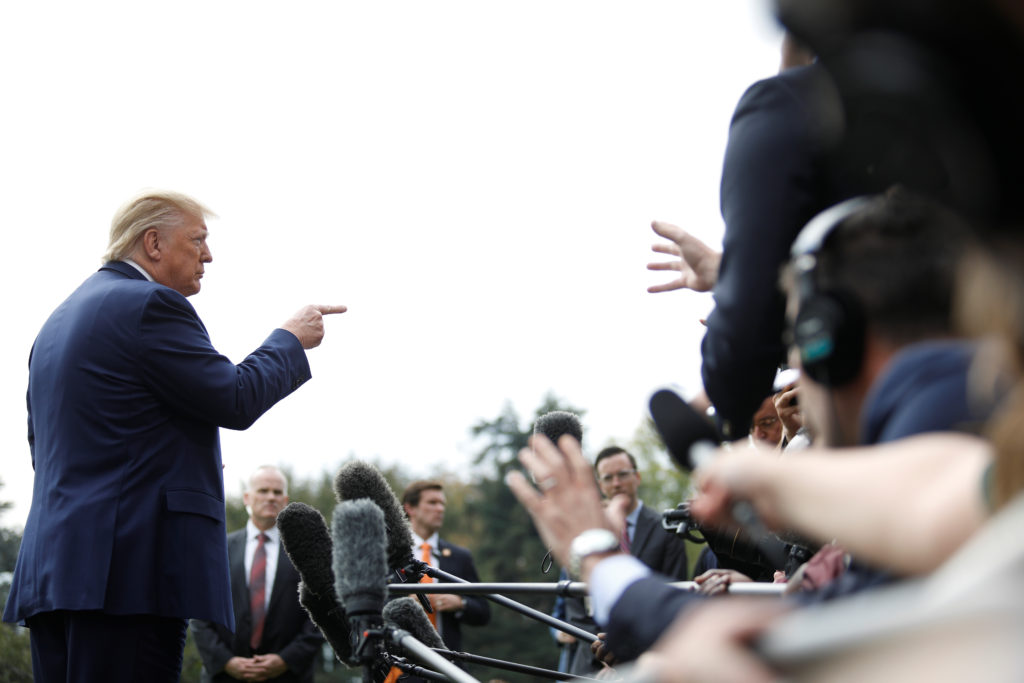 U.S. President Donald Trump speaks to reporters as he departs for travel to South Carolina, at the South Lawn of the White House in Washington, U.S., October 25, 2019. REUTERS/Tom Brenner

Trump’s judicial appointments will also have a broader impact on the law that goes beyond specific cases and issues, said Adam White, a law professor at George Mason University and a member of the conservative Federalist Society.

“When federal agencies announce regulations or take other actions, they often are interpreting the statutes that Congress has passed. For a long time, the courts have generally deferred to agencies’ interpretation of the law,” he said.

“In recent years, conservative judges and lawyers led by Justice Thomas on the Supreme Court have raised questions about whether courts have grown too deferential,” White said. Skepticism of executive branch power could grow in coming years with more conservative judges on the bench, White added.

“In general terms, if you like more government, having fairly aggressive conservative judges is going to make it more difficult,” said Jamal Greene, a professor at Columbia Law School. He added, “You’re very likely to see Trump judges push back on regulation.”

In pushing through so many appointments, Trump and Senate Republicans have also expanded the pipeline for Supreme Court picks for Trump and future GOP presidents.

In pushing through so many appointments, Trump and Senate Republicans have also expanded the pipeline for Supreme Court picks

The judicial nomination process under Trump has not been without controversy. Some of his judicial nominees have been criticized for lacking sufficient legal experience to be federal judges, including a handful who were rated unqualified by the American Bar Association. Trump has also drawn criticism for nominating overwhelming white, male judges.

“Prior to Jimmy Carter, almost all judges were white men,” said Greene. “Since the Carter administration, every administration has seemed to think it’s important to have some diversity on the bench. That seems not important at all to this administration.”

Conservatives dismissed the criticism, arguing that judges shouldn’t be chosen based on their race and gender.

“What qualifies someone to be a judge is their legal experience, but also their understanding of what a judge’s job is. And that has nothing to do with race or gender,” said Thomas Jipping, a senior legal fellow at the Heritage Foundation. “If the majority of Trump nominees were women and nonwhite, but still had the same judicial philosophies, the left would oppose them just as strongly,” he said.

Jipping noted that Trump’s judicial nominees have faced unprecedented opposition; nearly half of Trump’s nominees were confirmed with more than 25 percent opposition in the Senate. Just 8 percent of Obama’s nominees received the same level of “no” votes from the opposing party, according Jipping, who helped create the Heritage Foundation’s judicial tracker.

The fight will continue this fall as Republicans try to push more nominees through the Senate. Each confirmation is a bit of good news for Trump, whose policy agenda has stalled as he faces a damaging impeachment inquiry in the House.

As Trump ramps up his 2020 reelection bid, he can point to his federal court appointments to build support among Republicans who may be concerned by the impeachment and unhappy with other parts of his record, said Danielle Vinson, a political science professor at Furman University in Greenville, South Carolina.

Judicial appointments are “a key way for him to hold evangelical voters and the religious right” who oppose abortion, Vinson said. “It’s the one thing that unquestionably all conservatives look at the courts and say, ‘Yup, that’s an accomplishment.’”

Mark Graul, a Republican strategist in Wisconsin, said Trump has positioned himself to tell voters he delivered on his 2016 campaign promise to stock the federal bench with conservative judges.

“Clearly I think there were a lot of Republicans who were uncomfortable with Donald Trump as a candidate in 2016, but got there to vote for him because of the importance of the federal judiciary,” Graul said. “Regardless of what you think of the president, from a Republican and conservative perspective he’s certainly delivered.”