WASHINGTON — President Donald Trump’s “maximum pressure” campaign against Iran is at a crossroads.

His administration is trying to decide whether to risk stoking international tensions even more by ending one of the last remaining components of the 2015 nuclear deal. The U.S. faces a Thursday deadline to decide whether to extend or cancel sanctions waivers to foreign companies working on Iran’s civilian nuclear program as permitted under the deal.

Ending the waivers would be the next logical step in the campaign and it’s a move favored by Trump’s allies in Congress who endorse a tough approach to Iran. But it also would escalate tensions with Iran and with some European allies, and two officials say a divided administration is likely to keep the waivers afloat with temporary extensions. The officials spoke on condition of anonymity to discuss internal deliberations.

The mere fact that the administration is divided on the issue — it’s already postponed an announcement twice, according to the officials — is the latest in a series of confusing signals that Trump has sent over Iran, causing confusion among supporters and critics of the president about just what he hopes to achieve in the standoff with the Islamic Republic.

Some fear the mixed messages could trigger open conflict amid a buildup of U.S. military forces in the Persian Gulf region.

“It’s always a problem when you don’t have a coherent policy because you are vulnerable to manipulation and the mixed messages have created the environment for dangerous miscalculation,” said Karim Sadjadpour, an Iran expert at the Carnegie Endowment for International Peace. “Trump has simultaneously provoked an escalatory cycle with Iran while also making clear to Iran that he is averse to conflict.”

The public face of the pressure campaign is Secretary of State Mike Pompeo, and he rejects suggestions the strategy is less than clear cut.

“America has a strategy which we are convinced will work,” he said this past week. “We will deny Iran the wealth to foment terror around the world and build out their nuclear program.”

Yet the administration’s recent actions — which included an unusual mediation effort by Kentucky’s anti-interventionist Sen. Rand Paul — have frustrated some of Trump’s closest allies on Capitol Hill and elsewhere. Those actions also have led to unease in Europe and Asia, where the administration’s attempt to rally support for a coalition to protect ships transiting the Gulf has drawn only lukewarm responses.

Trump withdrew last year from the 2015 deal that Iran signed with the U.S., France, Britain, Germany, Russia and China. The agreement lifted punishing economic sanctions in exchange for limits on the Iranian nuclear program. Critics in the United States believed it didn’t do enough to thwart Iranian efforts to develop nuclear weapons and enabled Iran to rebuild its economy and continue funding militants throughout the Middle East. 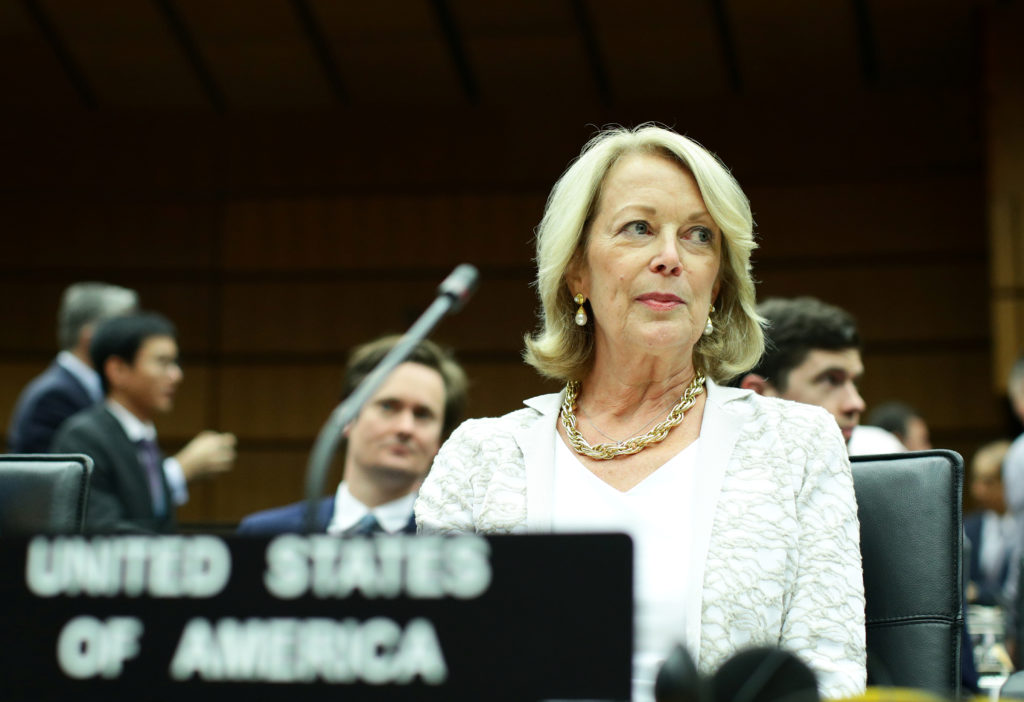 U.S. Ambassador to the International Atomic Energy Agency (IAEA) Jackie Wolcott waits for the start of a board of governors meeting at the IAEA headquarters in Vienna, Austria July 10, 2019. Photo by Lisi Niesner/Reuters

Trump, who called it “the worst deal in history,” began reinstating sanctions, and they have hobbled an already weak Iranian economy.

Iran responded by blowing through limits on its low-enriched uranium stockpiles and announcing plans to enrich uranium beyond levels permitted under the deal. Iran has taken increasingly provocative actions against ships in the Gulf, including the seizure of a British vessel, and the downing of a U.S. drone.

Sometime before Thursday, the administration will have to either cancel or extend waivers that allow European, Russian and Chinese companies to work in Iran’s civilian nuclear facilities. The officials familiar with the “civil nuclear cooperation waivers” say a decision in principle has been made to let them expire but that they are likely to be extended for 90 more days to allow companies time to wind down their operations.

At the same time, Trump gave his blessing to Paul to meet last week with Iranian Foreign Minister Mohammad Javad Zarif, who was in New York to attend a U.N. meeting. Officials familiar with the development said Paul raised the idea with Trump at a golf outing and the president nodded his assent.

Deal critics, including Republican Sens. Ted Cruz of Texas and Tom Cotton of Arkansas, say the waivers should be revoked because they give Iran access to technology that could be used for weapons. In particular, they have targeted a waiver that allows conversion work at the once-secret Fordow site. The other facilities are the Bushehr nuclear power station, the Arak heavy water plant and the Tehran Research Reactor.

Deal supporters say the waivers give international experts a valuable window into Iran’s atomic program that might otherwise not exist. They also say some of the work, particularly on nuclear isotopes that can be used in medicine at the Tehran reactor, is humanitarian in nature.

Trump has been coy about his plans. He said this past week that “it could go either way very easily. Very easily. And I’m OK either way it goes.”

That vacillation has left administration hawks such as Pompeo and national security adviser John Bolton in a quandary.

Bolton has long advocated military action against Iran with the goal of changing the Tehran government and, while Pompeo may agree, he is more sensitive to Trump’s reluctance to military intervention, according to the officials.

“Pompeo is trying to reconcile contradictory impulses by focusing on the means rather than ends, which is sanctions,” said Sadjadpour. “But rather than bringing clarity, Trump has brought further confusion by promoting the idea of Rand Paul as an envoy.”

This has given Iran an opening that it is trying to exploit, he said.

“For years, the U.S. has tried to create fissures between hard-liners and moderates in Tehran and now Iran is trying to do the exact same thing in Washington.”

Left: Iran's ambassador to the International Atomic Energy Agency (IAEA) Kazem Gharib Abadi speaks during a news conference after a board of governors meeting at the IAEA headquarters in Vienna, Austria July 10, 2019. Photo by Lisi Niesner/Reuters