WASHINGTON — Even as the United States and China butt heads over trade, their top diplomats and defense chiefs were meeting in Washington on Friday, looking to tamp down tensions on other issues that have put a chill on relations between the two world powers.

Secretary of State Mike Pompeo and Defense Secretary Jim Mattis sat down with their counterparts Yang Jiechi and Wei Fenghe at the State Department. The talks were due to be held in Beijing last month but were postponed after Washington announced new arms sales to Taiwan, and U.S. and Chinese vessels came close to colliding in the South China Sea.

Although the rescheduling of the U.S.-China Diplomatic and Security Dialogue signals an effort by the two sides to contain the slide in the relationship, it’s something of a placeholder ahead of a planned meeting at the end of the month between President Donald Trump and China’s President Xi Jinping at a Group of 20 summit in Argentina. 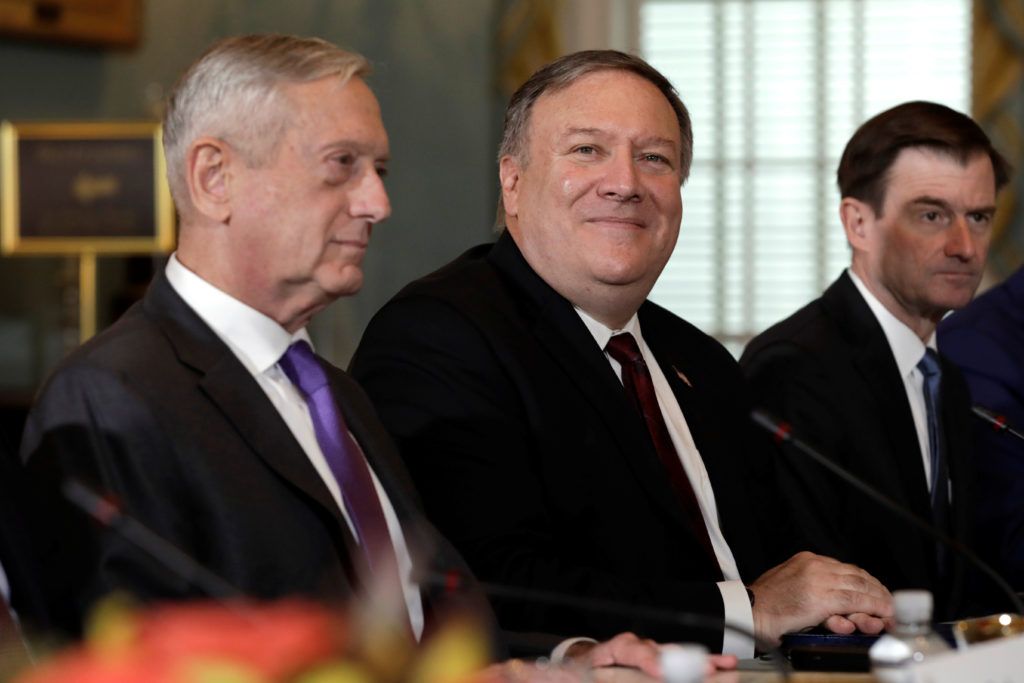 That’s where the two leaders are likely to address the burgeoning trade dispute that’s already hurting constituencies in both nations and threatens to weigh on the wider global economy. Trump has slapped tariffs on $250 billion in Chinese products, in a push to narrow the U.S. trade deficit and push back against what the U.S. views as predatory Chinese tactics on the high technology industry. Beijing has retaliated with tariffs on $110 million worth of U.S. goods.

“We want this to be a constructive, results-orientated relationship with China,” the U.S. ambassador to China, Terry Branstad, told reporters on Thursday. “The United States is not trying to contain China, but we want fairness and reciprocity.”

He described Friday’s meeting as a chance for a “frank and open” exchange of views on issues like North Korea, human rights, and cooperation on Afghanistan and Iran, where the U.S. is pressing Beijing to cut oil imports. The U.S. also seeks action from China on the export of a synthetic form of opioids called fentanyl that is a scourge of drug addiction in America.

Branstad said they would also discuss “strategic security” and avoiding accidents between the two militaries. The U.S. Navy says a Chinese destroyer came close to the USS Decatur in late September in an “unsafe and unprofessional maneuver” near a disputed reef in the South China Sea, where Beijing has sweeping but disputed sovereignty claims.

China clearly views Friday’s talks, which will be followed by a joint news conference, as a scene-setter for the upcoming meeting between Trump and Xi. Yang met Wednesday with U.S. national security adviser John Bolton and urged that the two sides “manage differences properly” and look to make that summit a success, China’s state-run Xinhua news agency reported.

“China is in damage control mode,” said Yun Sun, a China expert at the Stimson Center think tank, noting Beijing’s uncertainty about what exactly Trump wants out of a trade deal but its hopes that with U.S. midterm elections out of the way the mercurial American president may be more inclined to reach a compromise. “Their top priority is to stabilize relations,” she said.

Who is more vulnerable in the escalating U.S.-China trade war?