WATCH: In his UN debut, Trump urges the world body to reform

UNITED NATIONS — President Donald Trump made his debut at the United Nations on Monday, using his first moments at the world body to urge the 193-nation organization to reduce bureaucracy and costs while more clearly defining its mission around the world.

But while Trump chastised the United Nations — an organization he sharply criticized as a candidate for president for its spiraling costs — he said the United States would “pledge to be partners in your work” in order to make the U.N. “a more effective force” for peace across the globe.

“In recent years, the United Nations has not reached its full potential due to bureaucracy and mismanagement,” said Trump, who rebuked the United Nations for a ballooning budget. “We are not seeing the results in line with this investment.”

The president pushed the U.N. to focus “more on people and less on bureaucracy” and to change “business as usual and not be beholden to ways of the past which were not working” while also suggesting that the United States was paying more than its fair share to keep the New York-based world body operational.

But he also complimented the steps the United Nations had taken in the early stages of the reform process and made no threats to withdraw his nation’s support. His measured tone stood in stark contrast to his last maiden appearance at a global body, when he stood at NATO’s new Brussels headquarters in May and scolded the member nations for not paying enough and refusing to explicitly back its mutual defense pact.

While running for office, Trump labeled the U.N. as weak and incompetent, and not a friend of either the United States or Israel. But he has softened his tone since taking office, telling ambassadors from U.N. Security Council member countries at a White House meeting this year that the U.N. has “tremendous potential.”

Trump more recently has praised a pair of unanimous council votes to tighten sanctions on North Korea over its continued nuclear weapon and ballistic missile tests. 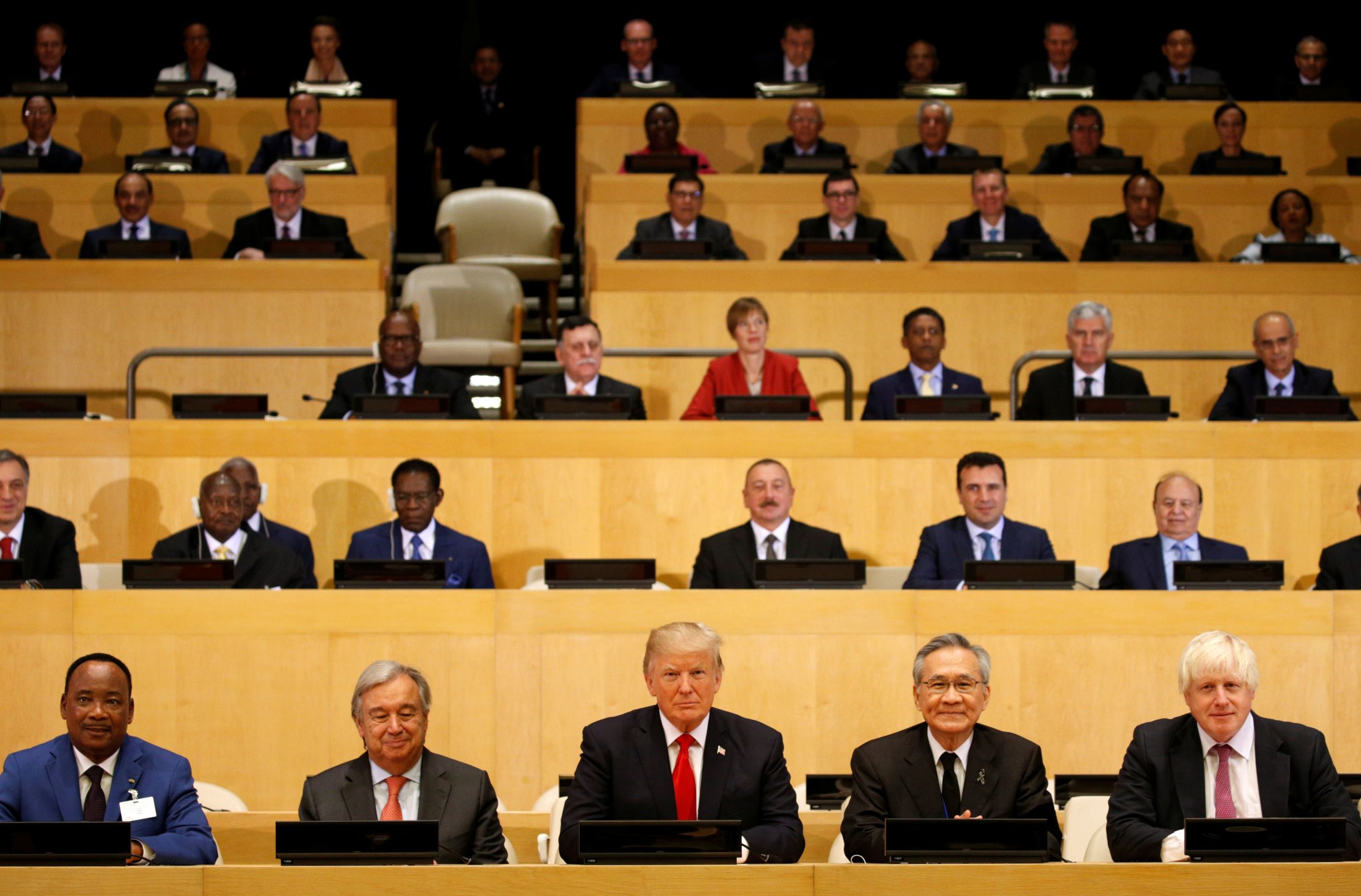 President Donald Trump participates in a session on reforming the United Nations at UN Headquarters in New York. Photo by Kevin Lamarque/Reuters

Trump’s big moment comes Tuesday, when he delivers his first address to a session of the U.N. General Assembly. The annual gathering of world leaders will open amid serious concerns about Trump’s priorities, including his policy of “America First,” his support for the U.N. and a series of global crises. It will be the first time world leaders will be in the same room and able to take the measure of Trump.

The president on Monday praised U.N. Secretary-General Antonio Guterres, who also spoke at the reform meeting and said he shared Trump’s vision for a less wasteful U.N. to “live up to its full potential.” The U.S. has asked member nations to sign a declaration on U.N. reforms, and more than 120 have done so. The president also kicked off his maiden speech at the world body by making a reference to the Trump-branded apartment tower across First Ave. from the U.N.

Nikki Haley, the U.S. ambassador to the U.N., said Trump’s criticisms were accurate at the time, but that it is now a “new day” at the U.N. An organization that “talked a lot but didn’t have a lot of action” has given way to a “United Nations that’s action-oriented,” she said, noting the Security Council votes on North Korea this month.

Guterres has proposed a massive package of changes, and Haley said the U.N. is “totally moving toward reform.”

Breakthroughs on a Middle East peace agreement are not expected. Jared Kushner, Trump’s son-in-law and senior adviser on the issue, recently returned from a trip to the Middle East.

The United States is the largest contributor to the U.N. budget, reflecting its position as the world’s largest economy. It pays 25 percent of the U.N.’s regular operating budget and over 28 percent of the separate peacekeeping budget — a level of spending that Trump has complained is unfair.

The Trump administration is conducting a review of the U.N.’s 16 far-flung peacekeeping operations, which cost nearly $8 billion a year. Cutting their costs and making them more effective is a top priority for Haley.

WATCH: What to expect from Trump’s first address to the UN