Unemployment Barely Budges in October, Rate Ticks Down to 9% 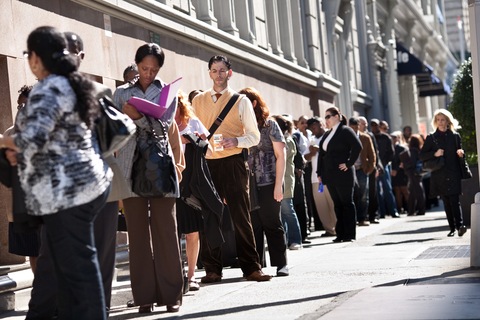 President Obama’s presence at the G20 in France and his work there with European partners to help bring the Greek debt crisis to a stable resolution highlight perhaps his greatest challenge to getting re-elected. He’s still spending a ton of time and focus on preventing a second recession that would send the American economy reeling. And it’s hard to argue that the president should be doing anything other than that.

But the October jobs report from the Department of Labor shows that a stubbornly high unemployment rate — 9 percent — continues to hang over America’s economic psyche. And no matter how successful President Obama is at preventing a double-dip recession (all the recent data suggest that fear has been significantly alleviated), the impact of high unemployment on the country’s continued pessimism remains a political problem.

The jobs report released Friday morning shows that 80,000 jobs were added to the payrolls in October. That’s not nearly enough job creation to make a dent in the sky-high unemployment rate, which ticked down from 9.1 percent.

Marketwatch’s Jeffry Bartash notes that the upward revisions from August and September is a hopeful sign.

Neither the Obama campaign nor the campaigns of those competing to be his Republican rival are expecting a dramatically different economic environment one year from now when voters head to the polls.

That’s precisely why both sides are also expecting an extraordinarily close election.

While Americans across the nation are downbeat about the economy and the future, a special USA TODAY/Gallup Poll finds that voters in a dozen key battleground states for the 2012 election are in an even deeper funk about their lives, Obama’s tenure and the nation’s politics.

One year before Election Day, the debut Swing States survey charts a narrower and more difficult course to victory for Obama than he navigated four years ago — and shows opportunities for Republicans in some states that have gone Democratic for decades.

Of all the unanswered questions regarding the 2012 Republican nomination contest, perhaps the one that looms largest is whether conservative GOP voters will overcome their reservations about Romney.

That the former Massachusetts governor has struggled in his courtship of this segment of the Republican electorate is no secret. Poll after poll has revealed that Romney, while consistently placing at or near the top of the GOP field, lacks the exuberant support enjoyed by some of his rivals.

A recent CBS/New York Times survey found that 18 percent of Republican voters would enthusiastically back Romney if he were the nominee, while 42 percent said they had reservations about him as a candidate.

Last weekend’s Des Moines Register poll, meanwhile, had Romney and Herman Cain in a dead heat in Iowa, but Cain enjoyed stronger support from those who said they definitely plan to vote in the caucuses — 27 percent compared to 10 percent for Romney. Cain also had a commanding three-to-one advantage when it came to those who identified themselves as very conservative.

If Romney is going to have a breakthrough with conservatives, it will have to come on his turf — the economy, jobs, fiscal policy and the like. On Friday, he’ll take another step in that direction when he delivers remarks to the Americans for Prosperity’s “Defending the American Dream Summit” in Washington, D.C.

In a USA Today editorial previewing his speech, “How I’ll Tackle Spending, Debt,” Romney touts his private sector background “turning around failing enterprises” to make the case that he’s best equipped to clean up the country’s fiscal mess:

Any turnaround must begin with clear and realistic goals. By the end of my first term, I will bring federal spending as a share of GDP down from last year’s staggering 24.3% to 20% or below. This level is in line with the historical average and nears the tax revenue our economy generates when healthy. With economic growth of 4% a year, meeting this goal will require approximately $500 billion of spending cuts in 2016, and that would still allow us to undo the Obama administration’s irresponsible defense cuts.

The president’s re-election team previewed Romney’s speech in a memo of its own Friday, with policy director James Kvaal charging Romney of operating “under the false assumption that we can just cut our way to prosperity.”

Our country can live within its means, while still investing in the future of middle class families through education, innovation, and infrastructure. Responsible spending cuts are part of the solution if they follow a balanced approach that asks everyone to do their part. However, Governor Romney advances a starkly different view of our country. He would cut taxes for the most fortunate Americans at the same time he makes reckless cuts to the very programs that help strengthen and build the middle class and provide security to seniors, children with disabilities and the most vulnerable Americans who are working harder and harder to make ends meet.

Romney is also taking on some (un)friendly fire from the right. On Thursday, the campaign for Texas Gov. Rick Perry branded Romney’s economic proposals as “more of the same.”

“Mitt Romney’s Washington Establishment approach to the economy and the federal budget is based on the false belief that Americans simply want a reshuffling of the status quo,” Perry communications director Ray Sullivan said in a statement.

For his part, Romney talks of slaughtering “sacred cows” and touching “electrified third rails,” warning “if we do not act now, the irresistible mathematics of debt will soon lead to unimaginable peril.”

That’s language designed to draw fiscally conservative Republicans to his cause — and for Romney, there’s no alternative. He must excite that part of the base by demonstrating his business acumen and mastery of economic policy, because as 2008 proved, he’s unlikely to make that connection when it comes to the social and cultural issues that drive many GOP voters.

The key for Romney will be to get fiscal conservatives to believe that he says what he means and means what he says.

Cain and his campaign are likely to be thrilled with the ABC News and Washington Post headlines after the first poll sizing up the GOP field since the stories about Cain’s alleged sexual harassment came to light on Sunday.

The pollsters from both ABC News and the Washington Post play important caveats for Cain very high up in their analyses.

Herman Cain is showing initial resilience in the face of allegations of sexual impropriety: More than half of potential Republicans voters say the controversy is not serious, fewer than a quarter say it makes them less likely to support Cain, and he’s running essentially evenly with Mitt Romney for the Republican presidential nomination.

Yet the controversy does pose risks for Cain. Just under four in 10 Republicans and Republican-leaning independents in this ABC News/Washington Post poll do say the allegations are a serious matter. Half of them say it makes them less apt to support Cain, and Romney leads him for the nomination in this group by nearly 20 points. If views of the seriousness of the issue were to increase, Cain’s support could be at risk.

The Washington Post’s Jon Cohen provides his take on the numbers:

Seven in 10 Republicans say reports that Cain made unwanted advances toward two employees when he was head of the National Restaurant Association in the 1990s–allegations which have been stiffly rebutted by Cain’s campaign–do not matter when it comes to picking a candidate.

But the potential threat to his burgeoning campaign is evident as well, with Cain slipping to third place among those who see the charges as serious, and Republican women significantly more likely than men to say the scandal makes them less apt to support Cain.