Voters Head to Polls With Union Rights, Abortion at Stake 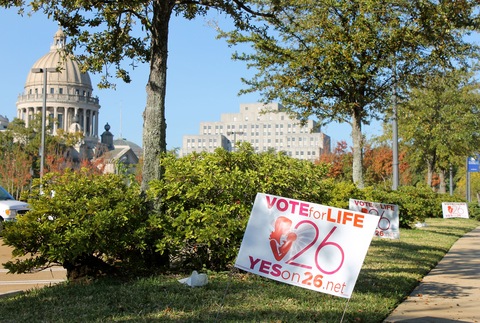 A sign in favor of Initiative 26 is displayed near the capitol building in Jackson, Miss. Voters will decide Tuesday whether the state’s constitution will recognize a fertilized human egg as a person. Photo by Esme E. Deprez/Bloomberg via Getty Images.

Both Mississippi and Kentucky are home to gubernatorial contests Tuesday, but those elections for the highest office in the state are being overshadowed by controversial and base-energizing ballot measures in Ohio and Mississippi.

In Ohio, labor unions and their Democratic allies appear poised for a victory over Republican Gov. John Kasich in their quest to repeal Senate Bill 5, which sought to restrict collective bargaining rights for public employee unions. After falling short of overtaking a majority in the Wisconsin state Senate in the recall elections this past summer, Democrats may find a badly needed shot in the arm in a critical battleground state.

In Mississippi, a so-called “personhood” measure is on the ballot which, if it passes, would recognize a fertilized human egg as a person under the state’s constitution. The implications for abortions and birth control are vast.

After spending all of last week confronting sexual harassment allegations, Herman Cain has a clear mission when he goes before cameras Tuesday afternoon in Phoenix: He must respond to the newest accusation — that he made inappropriate and unwanted sexual advances toward a woman more than a decade ago — in a way that prevents the story from consuming yet another full week of the candidate’s embattled campaign.

On Monday, Sharon Bialek accused Cain of groping her and trying to force her into a sexual act when she sought his help in finding a job after being fired by the National Restaurant Association in 1997.

Cain’s campaign immediately dismissed the allegations as “completely false,” and on ABC’s “Jimmy Kimmel Live!” Monday the candidate himself said, “[T]here’s not an ounce of truth in all of these accusations.”

“Here’s one thing people don’t know about Herman Cain,” Cain said. “I’m in it to win it, and I’m not going to be discouraged by all of this stuff.”

Whether or not Cain feels deterred by the allegations matters less than how the public perceives him — and the reports. When Bialek went before cameras in New York on Monday, she became the first woman to publicly accuse Cain, and she offered a very detailed account of what she alleges transpired between the two.

On Tuesday, Cain will likely have to offer more than a blanket denial of the allegations if he’s going to move the ball forward for his candidacy. He has yet to put forward his own version of his interactions with Bialek. If he can do so with a certitude that was lacking last week, when he gave shifting — and sometimes contradictory — statements about the other harassment accusations, he will go a long way to quell the immediate controversy of these latest accusations.

The Washington Post’s Perry Bacon and Dan Eggen report on what the most recent firestorm might mean for Cain’s immediate political future — and the shape of the Republican presidential field going forward:

[T]he continuing focus on alleged sexual harassment in his past could push conservative voters who galvanized behind Cain to defect. That could significantly reorder the already topsy-turvy GOP race that has been defined by sudden surges by different candidates in opinion polls, followed by equally sudden collapses or setbacks.

Despite the recent wave of allegations, Cain has managed to stay even with Mitt Romney in national polls. An NBC News/Wall Street Journal survey released Monday showed Cain with 27 percent support among Republican voters, trailing Romney by just a single percentage point.

Still, a Reuters poll released Sunday (that we also mentioned in this space Monday) showed Cain’s favorability rating had declined 9 percent in the last week.

How Cain handles this most recent allegation will go a long way toward determining whether that number rebounds, holds or continues to drop — and brings his other poll numbers down with it.

William Daley is still more than a year away from relinquishing the role of White House chief of staff, but he has reportedly handed off some of his duties to senior adviser Pete Rouse.

The Wall Street Journal’s Carol Lee had the news first:

On Monday, Mr. Daley turned over day-to-day management of the West Wing to Pete Rouse, a veteran aide to President Obama, according to several people familiar with the matter. It is unusual for a White House chief of staff to relinquish part of the job.

A senior White House official who attended Monday’s staff meeting where Mr. Daley made the announcement said that his new role has not yet been fully defined. But in recent weeks, Mr. Daley has focused more on managing relations with influential outsiders.

The recalibration of Mr. Daley’s portfolio, agreed to by Mr. Obama, is designed to smooth any kinks in the president’s team as it braces for the overlapping demands of governing while campaigning for re-election, people familiar with the matter said.

The move comes 10 months into Daley’s tenure as chief of staff, a time that has included a bruising debt-ceiling fight last summer and reports of souring relations between the White House and lawmakers in both parties on Capitol Hill.

ABC News’ Jake Tapper reports, however, that administration officials have pushed back on the characterization that the changes mean a lesser role for Daley — or that Rouse will assume the handling of the day-to-day operations.

White House officials denied that this was in any way a demotion for Daley, insisting that several weeks ago Daley had asked Rouse, a top aide to the president since his election to the Senate in 2004, to expand his role by helping the West Wing run more smoothly, making it more effective and efficient.