Was Trump call with Ukraine ‘perfect’? GOP has many answers

WASHINGTON — Republicans have no unified argument in the impeachment inquiry of Donald Trump , in large part because they can’t agree on how best to defend the president — or for some, if they should.

That would require a level of consensus that Trump’s call with the Ukraine president was “perfect,” as he insists. Or it would take a measure of GOP independence from Trump to suggest there may be a need to investigate.

Instead, it’s every Republican for himself or herself.

Utah Sen. Mitt Romney says the president’s actions toward Ukraine are “troubling.” Other Republicans say the behavior may raise concerns, but it’s not impeachable. 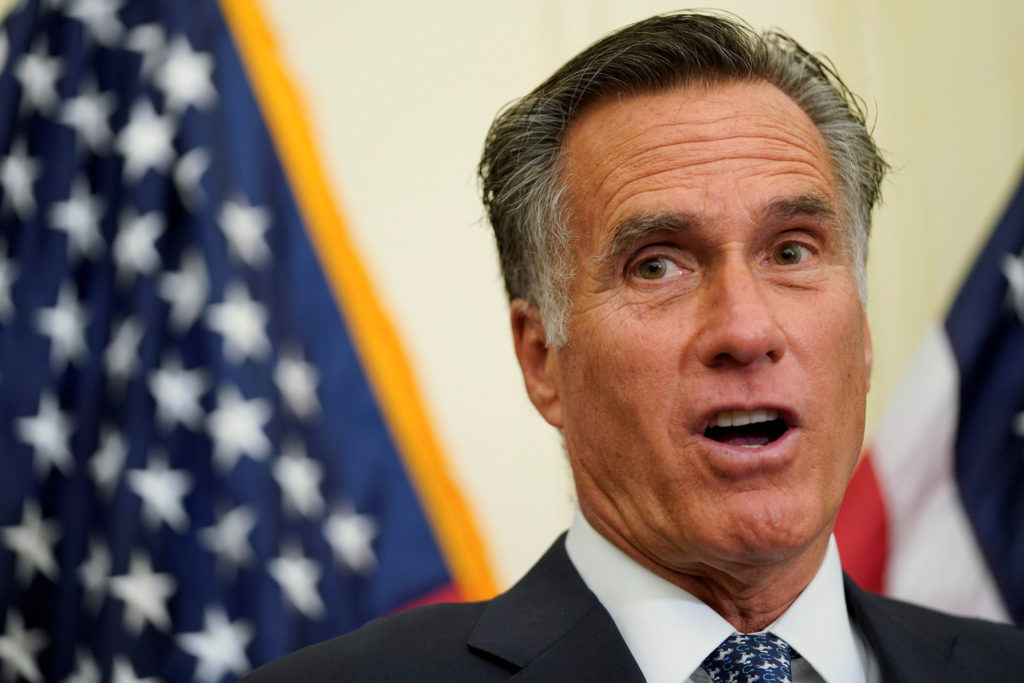 FILE PHOTO: U.S.Senator Mitt Romney (R-UT) speaks at a news conference about the Tobacco to 21 Act, which would raise the minimum age to buy tobacco products and e-cigarettes to 21, on Capitol Hill in Washington, U.S., May 8, 2019. Photo by Aaron P. Bernstein/Reuters.

The result is a mishmash of GOP commentary spilling from Capitol Hill that may shield lawmakers, for now, from risky political choices, but leaves them with a disjointed defense of Trump as impeachment hearings push into the public realm this coming week.

“It’s not good,” said veteran GOP strategist Alex Conant. “Normally you want to establish the facts, get them out on their own terms, and build a message around that strategy. They’re not doing any of that.”

He added: “It’s hard to rally people to your side without a coherent and sustainable message.”

Early on, as the White House ceded the PR strategy to the president, Republicans in the House and Senate parted ways as they confronted the political threat posed by the Democrats’ impeachment investigation.

As far back as mid-October, Senate Majority Leader Mitch McConnell, R-Ky., gathered his GOP colleagues in private and offered them advice on impeachment.

McConnell told Republican senators their best bet was to calibrate their own message about the impeachment inquiry to fit their political situation, according to two people familiar with the private meeting who spoke on condition of anonymity to discuss the closed-door session.

With a Power Point presentation, McConnell outlined the process ahead if the investigation moves to a vote in the House and trial in the Senate. But when it came time to broach what Republicans should say about impeachment, McConnell showed a preference for saying as little about it as possible.

McConnell suggested a couple of options. Senators could say they disagreed with the House process, he said, or they could simply say that as potential jurors in an eventual impeachment trial they wouldn’t discuss it, according to the people familiar with the meeting. 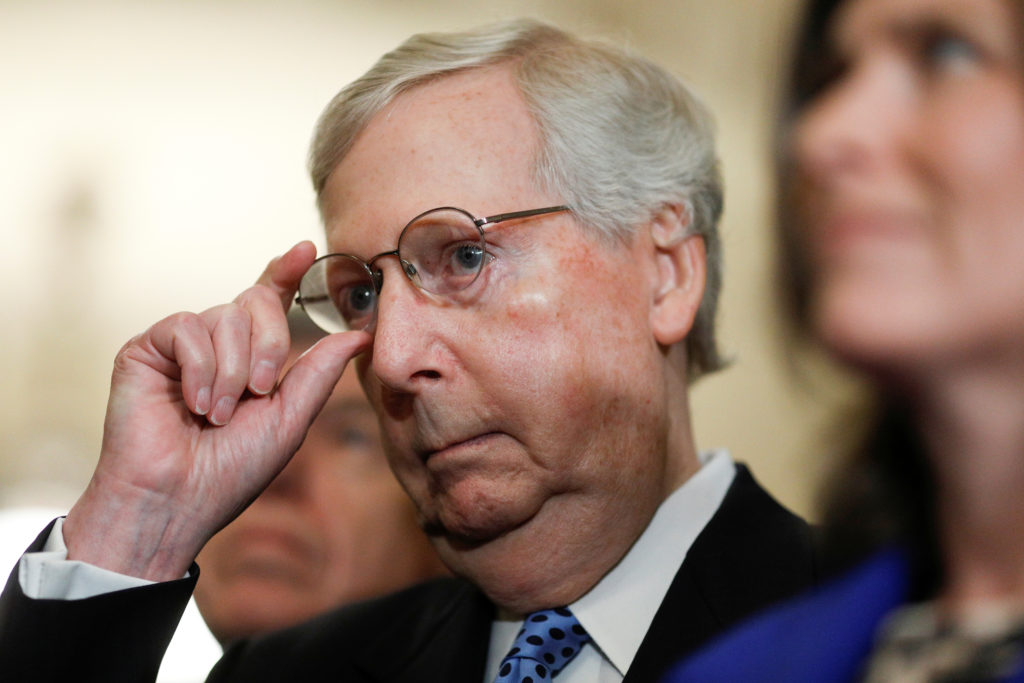 It was the kind of political advice one would expect from the risk-averse leader as he tries to insulate his 53-seat GOP majority, including several senators up for reelection in 2020 in states such as Maine and Colorado where voters are split on Trump.

“That’s what a good leader does — gives them the flexibility they need to respond. My problem is, given how egregious the president’s conduct is, he’s given them a pass,” said Jim Manley, a veteran Democratic strategist.

“Most of these folks have got to know that what the president’s doing is wrong, but they’ve made a cold-hearted, political decision right now it’s best to stick with the president,” he said.

At its core, the impeachment inquiry is based on what Democrats say is an improper quid pro quo — a “shakedown” — that Trump engaged in during his July 25 phone call with Ukrainian President Volodymyr Zelesnkiy.

According to a White House rough transcript of the call and testimony from several government officials, Trump was withholding needed military aid the East European ally as he wanted Zelenskiy to investigate Trump’s potential 2020 rival, Joe Biden, as well 2016 U.S. election interference.

In the House, where congressional district boundary lines have been drawn in a way that leaves Republicans barely exposed to voters with centrist or left-leaning views, GOP leaders are mounting a more fulsome, if shifting, defense of Trump. 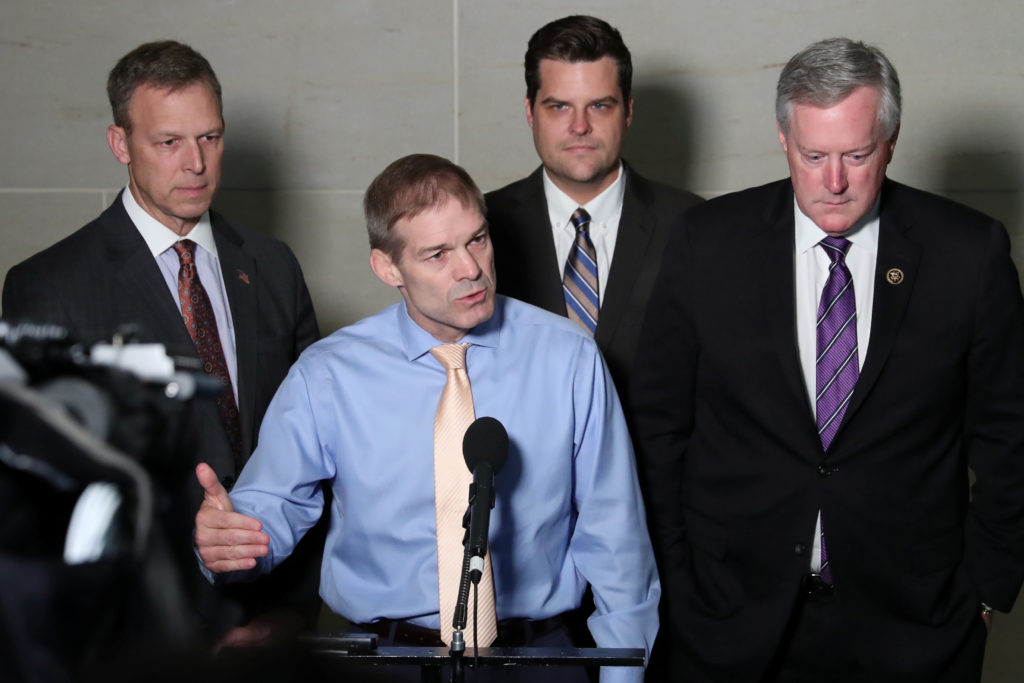 GOP leader Kevin McCarthy of California says the president did nothing wrong on the call with Zelenskiy, and Trump’s top allies in the House, including Ohio Rep. Jim Jordan, the top Republican on a committee conducting the impeachment inquiry, are leading the daily arguments against Speaker Nancy Pelosi, D-Calif., and the Democrats.

Jordan is seen as the “chief messenger” for Republicans, said one senior House GOP aide who was not authorized to publicly discuss the strategy and spoke on condition of anonymity.

The House Republican message against impeachment has four distinct parts, according to this aide: The transcript of Trump’s call with Zelenskiy shows the president did nothing wrong; several key witnesses testified that they don’t have firsthand knowledge of what transpired; the Ukrainians didn’t know the military aid was being upheld until it was publicly reported; and eventually the U.S. agreed to send the money to Ukraine.

It’s a message being reinforced daily in the media by Jordan and other Trump surrogates, including Reps. Mark Meadows, R-N.C. and Lee Zeldin, R-N.Y., who are also part of the inquiry panels, the person said.

What goes without saying, though, is that few Republicans lawmakers are willing to say the call was “perfect” or that there was “no quid pro quo,” as Trump insists.