MIAMI (AP) — Ten Democrats railed against a national economy and Republican administration they argued exist only for the rich as presidential candidates debated onstage for the first time in the young 2020 season, embracing inequality as a defining theme in their fight to deny President Donald Trump a second term in office.

NBC News hosted the first round of 2020 Democratic presidential debates. Watch in the video player above.

Health care and immigration, more than any other issues, led the debate. And Massachusetts Sen. Elizabeth Warren, more than anyone else, stood out — on her own at times — in calling for “fundamental change” across the nation’s economy and government to address persistent issues of inequality.

“I think of it this way. Who is this economy really working for? It’s doing great for a thinner and thinner slice at the top,” Warren declared shortly before raising her hand as one of the only Democrats on stage willing to abolish her own private health insurance in favor of a government-run plan. “Health care is a basic human right, and I will fight for basic human rights.”

The debate marked a major step forward in the 2020 presidential campaign as Democrats fight to break out from a crowded field that has been consumed by one question above all: Who’s best positioned to defeat Trump? The candidates will spend the next eight months before primary voting begins scrapping over that question and the broader fight for the direction of their political party.

And while Trump is the ultimate target of many Democratic voters, the president was hardly a major feature for most of Wednesday night. He was barely mentioned in a largely civil debate with moments of modest policy clashes and few instances of Democrat-on-Democrat confrontation. In one of the night’s final moments, Washington Gov. Jay Inslee did declare, “The biggest threat to the security of the United States is Donald Trump.” 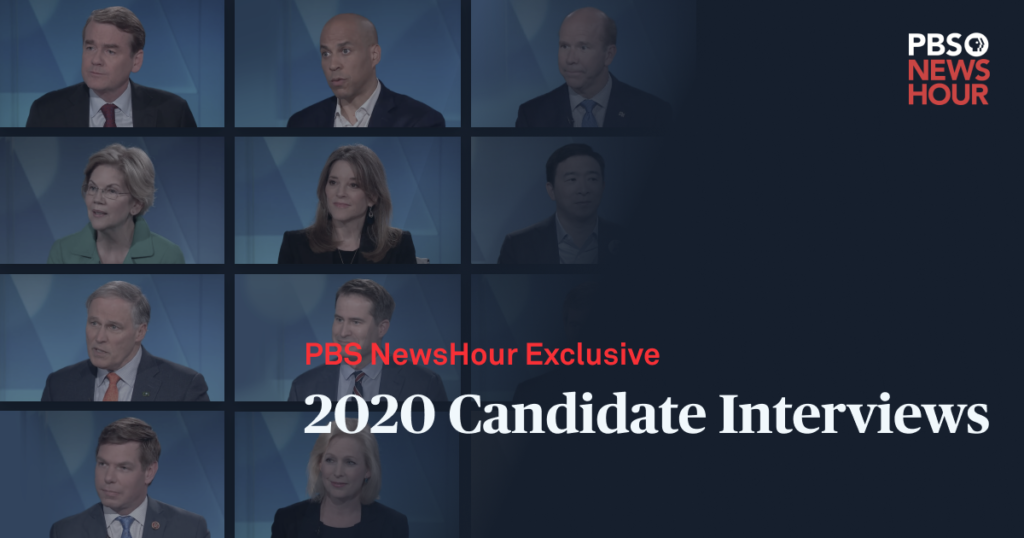 For one night, at least, Democrats were content to focus on their views of what America is and should be. No one openly stumbled.

Absent the ugly attacks or missteps of some past debates, the two-hour discussion allowed the party to show off its extraordinary diversity. Wednesday’s lineup featured three women, one black man and another man of Mexican heritage. Three candidates spoke Spanish at times, while Booker, an African American, talked about the violence that left seven people in his own urban neighborhood shot last week.

Minnesota Sen. Amy Klobuchar spoke up for the women on stage: “I just want to say there’s three women up here who have fought pretty hard for a woman’s right to choose.”

Immigration was on the candidates’ minds as they pointed to the searing photos of a drowned Salvadoran father and his toddler daughter at the Rio Grande and blamed Trump and his policies concerning migrants crossing into America illegally.

Former Obama administration housing chief Julian Castro said, “Watching that image of Oscar and his daughter Valeria was heartbreaking. It should also piss us all off.”

Warren spent the evening at center stage, a top-tier candidate whose campaign has gained ground in recent weeks as she has released a near-constant stream of policy proposals. She was flanked by lower-tier candidates including Sen. Cory Booker of New Jersey, former Texas Rep. Beto O’Rourke and others who needed big moments to help spark momentum in the crowded field.

The modest differences on health care underscored a much louder internal fight over how aggressive Democrats should be on the nation’s most pressing issues.

On one side: candidates like Warren who are demanding dramatic change that includes embracing liberal policy priorities like free universal health care, debt-free college, a forgiving immigration policy and higher taxes on the rich. On the other: pragmatic-minded Democrats like Biden — and little-known former Maryland Rep. Delaney — who are calling for modest policy solutions that could ultimately attract bipartisan support.

Most of Warren’s rivals Wednesday night, including O’Rourke and Klobuchar, called for universal health care but also favored preserving the private insurance market. Vermont Sen. Bernie Sanders, who will be in a second debate group Thursday night, has proposed a “Medicare for All” system without private insurance.

“We should be the party that keeps what’s working and fixes what’s broken,” said Delaney, one of the few Democrats on stage who represented his party’s moderate wing. “Why do we have to stand for taking away something from people?”

De Blasio, who joined Warren in raising his hand on health insurance, cast the debate as part of “the battle for the heart and soul of our party.”

Trump, the elephant not in the room, was in the air traveling to Japan for a round of trade talks as Democrats faced the nation for the first time in the 2020 campaign.

Earlier in the day, he confirmed that he would watch the debate from Air Force One. His first tweet of the night: “BORING!”

The Republican president helped unite the Democrats, who joined together in blaming him for the deaths of a migrant father and his toddler daughter who drowned in the Rio Grande.

But the candidates didn’t agree on everything.

“I just think it’s a mistake, Beto,” he said, adding that O’Rourke would agree with him “if you did your homework on this issue.”

While the candidates have been courting voters in key states for several months already, the vast majority of the nation has yet to pay close attention to the diverse field.