WASHINGTON (AP) — President Donald Trump’s director of national intelligence is refusing to turn over to Congress an urgent whistleblower complaint that reportedly concerns Trump making an unspecified promise to a foreign leader, the chairman of the House intelligence committee said Thursday.

Trump, though giving no details about any incident, denied he would ever “say something inappropriate” on such a call.

Rep. Adam Schiff, D-Calif, said he could not confirm whether the report from The Washington Post was accurate because the administration was claiming privilege in withholding the complaint, even though the intelligence community’s inspector general said it was an “urgent” matter of “serious or flagrant abuse” that must be shared with lawmakers.

Trump, though giving no details about any incident, denied he would ever “say something inappropriate” on such a call.

“There is an effort to prevent this information from getting to Congress,” Schiff said, describing it as an unprecedented departure from law.

Schiff said the acting director of national intelligence, Joseph Maguire, in a further departure from standard procedure, consulted with the Justice Department and perhaps the White House, in deciding not to transmit the complaint to Congress.

Because the director is claiming privileged information, Schiff said he believes the whistleblower’s complaint “likely involves the president or people around him.”

Schiff spoke to reporters after the intelligence community’s inspector general, Michael Atkinson, appeared behind closed doors Thursday but declined to tell the panel the substance of the complaint.

The Washington Post reported the complaint involves an intelligence official’s allegation that Trump made the promise to an unidentified foreign leader in a telephone call. The Post cited two anonymous former U.S. officials.

The Associated Press has not confirmed the report.

Trump dismissed it all.

“Another Fake News story out there – It never ends!” Trump tweeted. “Virtually anytime I speak on the phone to a foreign leader, I understand that there may be many people listening from various U.S. agencies, not to mention those from the other country itself. No problem!”

He asked: “Is anybody dumb enough to believe that I would say something inappropriate with a foreign leader while on such a potentially ‘heavily populated’ call.”

But the situation raised Democrats’ concerns that the intelligence community might be under pressure from the administration to withhold information from Congress.

Trump named Maguire, a former Navy official, as acting intelligence director in August, after the departure of Director Dan Coats who often clashed with the president, and the retirement of Sue Gordon, a career professional in the No. 2 position.

Maguire has refused to discuss details but he has been subpoenaed by the panel and is expected to testify publicly about the whistleblower complaint next Thursday. Atkinson is expected to be there next week, too.

Lawmakers on the intelligence panel appeared frustrated as they left the closed session.

“There’s a lot more we have to learn,” said Rep. Mike Quigley, D-Ill.

In calling the inspector general to testify, Schiff said Atkinson determined the whistleblower complaint was “credible and urgent” and should be “transmitted to Congress.”

But Atkinson, the government’s intelligence watchdog, mostly discussed process with the committee Thursday, apparently constrained by the law governing his own position.

The inspector general’s testimony was described by three people with knowledge of the proceedings. They were not authorized to discuss the meeting by name and were granted anonymity.

In issuing a subpoena for Maguire to appear, Schiff said the complaint had not been transmitted to Congress within 10 days “in violation of the law.”

Schiff noted in his letter seeking Maguire’s testimony that “your office consulted the Department of Justice about the complaint even though the statute does not provide you discretion to review” the inspector general’s findings, “let alone to involve another entity within the executive branch.” 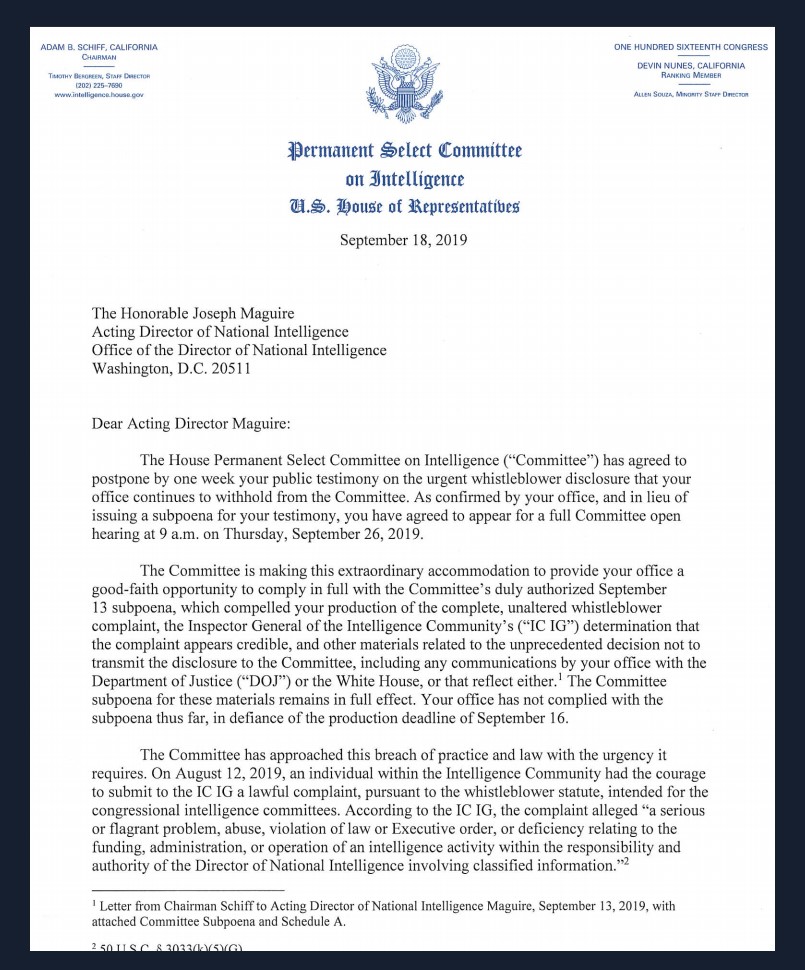 Andrew Bakaj, a former intelligence officer and an attorney specializing in whistleblower reprisal investigations, confirmed that he was representing the whistleblower but declined further comment.

In a letter Tuesday, the general counsel for the Office of the Director of National Intelligence, Jason Klitenic, wrote that the agency is protecting the whistleblower and argued the allegation does not meet the definition of “urgent concern.” He said the complaint “concerned conduct from someone outside the intelligence community and did not relate to ‘intelligence activity’ under the DNI’s supervision.”

Rep. Jim Himes, D-Conn., said Thursday on MSNBC that the acting director “broke the law when he decided to basically intercept the inspector general’s report to Congress.”

That’s “never been done before in the history of inspector general reports to the Congress,” Himes said. “And the American people should be worried about that.”

Himes said ahead of the meeting that lawmakers are in the uncomfortable position of not knowing any more than what’s in the news reports.

“We don’t know exactly what is in the substance of this complaint,” he said. “It could be nothing. It could be something very, very serious.”