In the wake of a shooting rampage in Atlanta that left eight dead, including six Asian women, and after a year of hate speech and attacks on Asian people tied to the pandemic, public officials are facing mounting pressure to prevent and address the roots of racist violence.

In response, officials are pushing initiatives that seek to better track and investigate hate crimes, as well as provide resources to fight against anti-Asian bias across the country.

A White House announcement on Tuesday outlined a plan of action that includes federal, state and local law enforcement training on handling hate crimes, establishing a committee within the COVID-19 Equity Task Force to address xenophobia against Asian people, and allocating $49.5 million to fund community-based services for Asian or Pacific Islander survivors of sexual and domestic violence.

“These new actions are definitely a good first step and show the Biden administration is taking the issue seriously,” said Cynthia Choi, co-executive director of Chinese for Affirmative Action and co-founder of Stop AAPI Hate.

The White House plan includes initiatives that align with a number of their goals, such as providing resources to community groups, strengthening public education about hate crimes and expanding language accessibility to hate crime information.

But when it comes to law enforcement, some AAPI advocates said they hope federal, state and local officials do not resort to over-policing that might disproportionately affect communities of color.

“Increased police presence doesn’t work if there are community members who fear police as much as they fear the next attack,” said LaVita Tuff, policy director for Asian Americans Advancing Justice-Atlanta.

Increased police presence doesn’t work if there are community members who fear police as much as they fear the next attack.

The U.S. has a long history of public violence and government-sanctioned discrimination against Asian people. They have also been the targets of hate during other public health crises like the 2003 SARS outbreak. Since the start of the pandemic early last year, the country has seen a resurgence of violence against Asian communities.

This came alongside false allegations, fueled by political leaders like former President Donald Trump, blaming China for the pandemic.

“For the past year, my colleagues and I in the Asian -American advocacy space, we’re really sounding the alarm to the issues that the Asian -American community was facing … as a result of the racial slurs that were being used to describe COVID,” said Madalene Xuan-Trang Mielke, president and CEO of the Asian Pacific American Institute for Congressional Studies.

The Center for the Study of Hate and Extremism at California State University, San Bernardino determined that hate crimes against Asian people in 16 large cities increased 149 percent in 2020. In a Pew Research Center survey, 31 percent of Asian respondents reported that they have been subjected to racial slurs or jokes since the coronavirus outbreak, compared with 21 percent of Black respondents, 15 percent of Hispanic participants and 8 percent of white participants.

One place to start, several activists and researchers said, is to improve data collection and accessibility to hate crime information.

“We want to be able to understand the nature of what’s happening so that we can develop responses that will actually be effective,” Choi said. 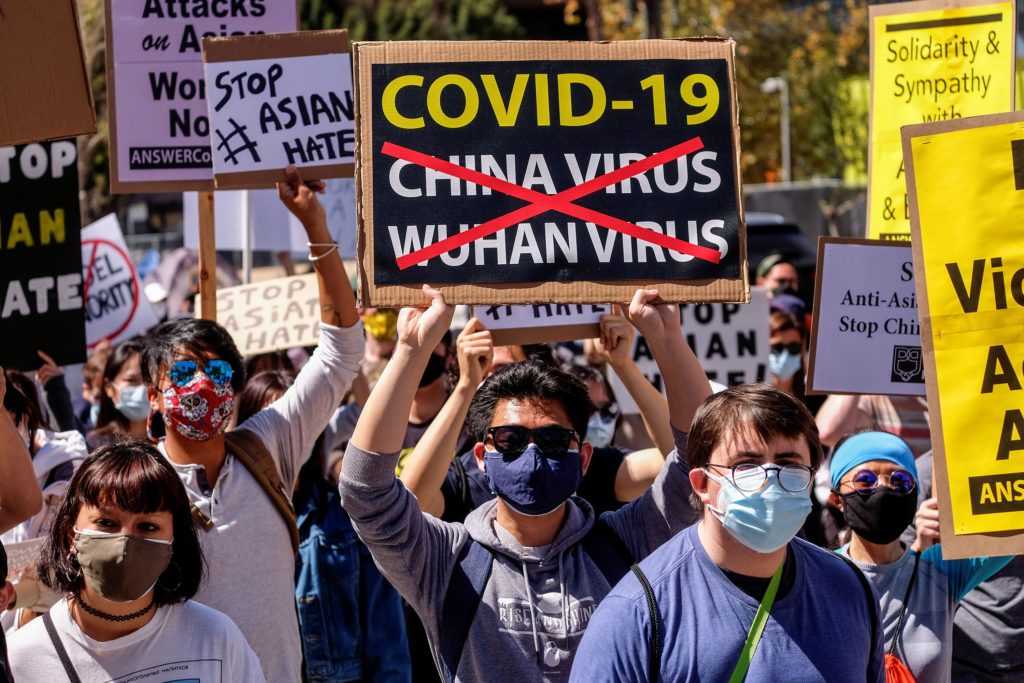 The FBI started collecting national hate crime data from police agencies in the 1990s, but underreporting is a significant issue, said Brian Levin, a professor of criminal justice and director of the Center for the Study of Hate & Extremism at California State University, San Bernardino.

Part of this is due to lack of police training on how to identify and report hate crimes, Levin said, but victims can also be fearful of reporting crimes to law enforcement. Other barriers for crime reporting include limited language resources, said Andrew Leong, a professor of philosophy at the University of Massachusetts Boston, who specializes in law, justice and equality in Asian American communities.

National government data on hate crimes is also inconsistent. In 2017, the FBI reported a total of 7,175 hate crime incidents for that year, based on responses from 16,149 law enforcement agencies. But the Bureau of Justice Statistics’ National Crime Victimization Survey includes crimes not reported to police and is based on victims’ perception and crime scene evidence, as opposed to police hate crime criteria. Between 2013 and 2017, the NCVS estimated that the average number of hate crime incidents annually was 204,600, less than half of which were reported to police, the report says.

Biden’s plan directs the FBI to create an interactive hate crimes webpage and add “scenario-based training on anti-Asian bias crimes” to its data collection training manual for state and local law enforcement. The bureau also added more categories of crimes and demographic data to its incident reporting platform for police.

The White House plan and the COVID-19 Hate Crimes Act would also move to amplify public education about Asian communities and hate crime prevention, and give resources to local community organizations working to fight anti-Asian bias.

Choi said that the Biden administration reached out to Stop AAPI Hate and other Asian advocacy organizations prior to releasing its plan, which she said includes many recommendations championed by groups at the forefront of making local change.

READ MORE: How to address the surge of anti-Asian hate crimes

She commended the decision to fund services for AAPI victims of gender-based violence and to appoint a director for the White House Initiative on Asian Americans and Pacific Islanders, who will be tasked with coordinating across federal agencies to address bias and violence.
It’s important that officials at all levels of government continue to build partnerships with advocates who have been working for years to address these issues, Choi added.

In the California Bay Area, Choi’s organization created a community ambassador program with groups of volunteers who walk the streets, help keep the neighborhood clean and escort seniors to appointments. Other groups like the Asian Pacific American Institute for Congressional Studies host bystander intervention training.

Though a number of lawmakers and activists have called for stronger enforcement of hate crime laws, others said they prefer resident-driven efforts. Hate crime laws can lead to harsher sentences for crimes, but many attacks against vulnerable communities may not be classified as hate crimes without evidence of racial bias, Levin said. There’s also little evidence showing that these laws deter the crimes.

It’s unclear at this point how the Justice Department will work with local police departments and how the agencies will respond to training. But as people around the country reevaluate the role of law enforcement, many argue that increasing police presence will not help vulnerable residents.

“I don’t think adding police into a neighborhood necessarily makes it safer. I think that sometimes escalates the problem,” said Lacy Lew Nguyen Wright, a Los Angeles-based activist. “What I want is to dismantle the systems that helped create some of these problems … and then to build new resources and new structures to help amend and create more inclusive communities who come forward.”

As Wright and others wait to see how lawmakers follow through on their proposals, they implore officials to make ongoing efforts to engage Asian communities on issues beyond discussions of violence or elections.