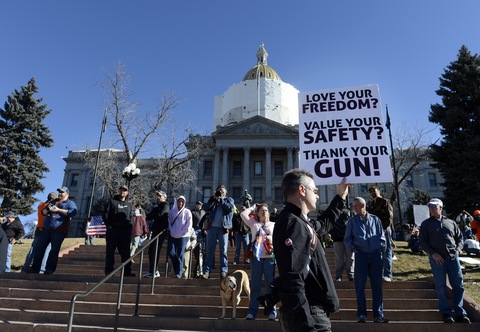 As we wrap up coverage for PBS’s “After Newtown” weeklong special on guns and gun violence in the wake of the mass shooting at Sandy Hook Elementary School, we examine look at some of the numbers: just how do Americans of all stripes feel about possible new gun policies?

Researchers at Johns Hopkins looked into the issue, and after conducting two national public opinion surveys, released the data. You can read their report, including methods used and various findings, in the New England Journal of Medicine.

The researchers categorized respondents based on political leaning (Democrat, Republican or Independent), gender and gun-owning status (non-gun Owners; non-gun owner but gun in home; or gun owners). Of the gun owners, NRA membership was included as a subset. We dug into the data and found some interesting points ourselves.

Unsurprisingly, Democrats showed much more support for stricter gun policies than NRA members. Men had lower support than women. And non-gun owners had higher support on average than NRA members. When grouping similar policies into types (like ones directed towards assault weapons or just gun dealers), background checks were by far the most popular type, with assault weapon and ammunition policies the least popular.

We were surprised that NRA members had the widest variation in their support (or not) of policy types than any other group. This means NRA members showed a lot of distance (in terms of percent approval points) between what they liked best and what they didn’t. Women, on the other hand, liked just about every policy, and approved of them at similar amounts.

You can dig into the full dataset on all 31 gun policies across 10 groups in our interactive table here.

That said, there was plenty of variation between groups and the policy types they suggested. Even though the NRA members supported background check policies the most, their level of support was smashed by Democrats: they supported assault weapons policies 22 percent more than the average, while NRA members were 38 percent below the average support level. These differences are highlighted in our interactive chart, where you can view support for policy types against the average of all groups.

Given the variation, could any policy be considered a shoo-in if their was a popular referendum on gun policy?

A quick sift through the data suggests that yes, there were quite a few that had high support. The top five policies were all over an average 80 percent approval rate between groups. You can see those listed in our piece “Americans Support Range of Proposals to Reduce Gun Violence,” including an interview with the study’s lead researcher.