What do Democratic candidates need to make the first 2020 debates?

We now have the times and locations for the first 2020 Democratic primary presidential debates. And they are fast approaching: They kick off June 26 and 27 in Miami and July 30 and 31 in Detroit. But who will be on stage? And on which night?

In 2016, the Republican National Committee ranked their 17 presidential candidates according to polling data and held separate debates for the highest and lowest-ranking contenders. But Democratic National Committee Chairman Tom Perez has taken a different approach for the 2020 primary debates.

In February, when the DNC announced its criteria for the first two debates, Perez said wanted to run “an open and transparent primary process.” The new debate criteria will give “all types of candidates the opportunity to reach the debate stage,” he added, and give “small-dollar donors a bigger voice in the primary than ever before.”

According to the DNC rules, candidates can qualify for the first two debates by either:

Each debate will include no more than 10 candidates, chosen at random from the pool of those who qualify. Should more than 20 total candidates qualify, preference will be given to those who meet both criteria for polling and donations. (The criteria for the rest of the debates has not been announced, so it’s unclear if they’ll remain the same or change).

A wide spectrum of candidates face two relatively narrow metrics to qualify for the first debates.

This means a wide spectrum of candidates face two relatively narrow metrics. If former Vice President Joe Biden becomes Democratic primary candidate Biden, he would be held to the same standard as spiritual advisor Marianne Williamson. Who has to work hardest to meet those criteria?

Let’s set aside four candidates who are consistently above five percent in national polls, and seem likely to make the debates: Sens. Bernie Sanders, Kamala Harris and Elizabeth Warren, and former congressman Beto O’Rourke. Where does the rest of the field stand when it comes to meeting the DNC criteria?

Who is meeting the polling threshold? 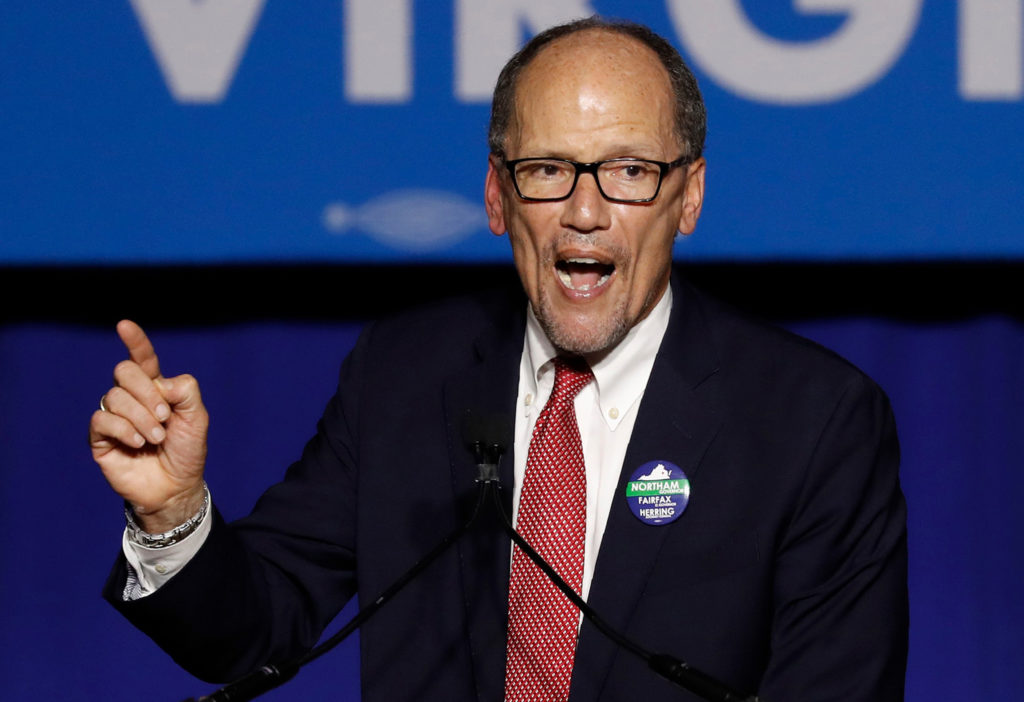 Democratic National Committee Chairman Tom Perez did not want to use the so-called “undercard” debate format the GOP used during the 2016 Republican primaries. File photo by REUTERS/Aaron P. Bernstein

Who is falling short of the polling threshold?

Candidates who are not even included in the polls. Because the field is so big, pollsters’ decisions on whom to include could have a big effect. In last week’s Emerson College poll of Iowa voters, for example, two candidates were excluded: former congressman John Delaney and Williamson.

As Patrick Murray, the director of the Monmouth University Polling Institute, told Politico: “The main thing standing between a candidate registering 1 percent and 0 percent in any particular poll is each pollster’s decision of whom to include. This places an undue editorial burden on public polling outfits.”

Who is benefiting from the small donor threshold?

Young, charismatic candidates like Yang and Buttigieg met the funding threshold before polling thanks to a devoted internet following (see “Yang Gang”) and a strong media presence. For lower-tier candidates who did not start out with a phonebook of donors from previous elections, these qualities have helped lead to high volumes of small-dollar supporters. Others, like Gillibrand, have yet to meet the donor minimum, though the New York lawmaker has $10.3 million in the bank from her last Senate race.

Who is struggling to build small donor support?

Others, like Biden and former Virginia governor — and longtime Democratic fundraiser — Terry McAuliffe will have large, big-money donor books to comb through if they chose to throw their hats into the ring, but that could be less valuable early on, given the DNC’s focus on grassroots support. Some have questioned whether Biden, in particular, will be able to receive Sanders or O’Rourke-level grassroot support.

The money race will become clearer soon, because the next fundraising report is due to the Federal Election Commission mid-April. (On Tuesday some candidates already started announcing their fundraising hauls ahead of the deadline; Sanders said he raised $18 million in the first quarter, and Harris said she raised $12 million. O’Rourke announced Wednesday that he raised $9.4 million in 18 days after launching his bid).

Left: 2020 Democratic presidential candidate Andrew Yang and the rest of the primary field face a narrow set of criteria to qualify for the first two Democratic debates this year. File photo by REUTERS/Scott Morgan