What just happened in Kentucky?

Kentucky’s gubernatorial race between Trump-backed incumbent Matt Bevin and Democratic Attorney General Andy Beshear remains too close to call Wednesday, which in itself is remarkable.

Regardless of who prevails, the fact that it was close at all reflects a staggering swing in a state President Donald Trump won by 30 points that could signal sweeping implications for 2020.

Beshear won the two big suburban/metropolitan counties decisively. In Fayette County, home to Lexington, where Trump held a rally on Monday, Beshear’s margin was about 36,000 votes. In 2015, he took that county by about 10,000 votes.

In Jefferson County, home to Louisville, Beshear won by some 100,000 votes–that’s up from the Democrat’s margin of 37,000 in the last gubernatorial election. In three suburban Cincinnati counties, as well as in eastern Kentucky coal country, Bevin significantly underperformed compared to both his 2015 results and Trump’s 2016 performance.

Voter turnout was much higher than the 31 percent predicted by Kentucky’s secretary of state. There were about 1.4 million votes cast in the governor’s race–that’s about 42 percent turnout.

Political operatives and analysts will spend the coming days and weeks trying to parse out why Bevin fared so poorly. It is notable that every other statewide office in Kentucky went for the Republican by at least 5 points. Some Republicans are saying that Bevin was uniquely unpopular, which is supported by pre-vote polls, but it also shows that Trump’s support for the beleaguered governor was not enough to overcome his weaknesses.

Trump came to Kentucky on Monday to rally votes for Bevin and at the rally, he noted the stakes for him and for 2020.

One other factor — the Libertarian candidate John Hicks got 2 percent of the vote, likely most pulling votes from Bevin.

So what does that mean going forward? It is unclear. Senate Majority Leader Mitch McConnell, R-KY, is also up for reelection next year, and Democrats would love to see the powerful Republican ousted. Democrats on the ground in Kentucky note that McConnnell is even less popular in the state than Bevin.

“If we can beat Bevin, we can remove Mitch McConnell,” Denise Finley, a Beshear supporter who knocked on thousands of doors in Lexington during the campaign, told PBS NewsHour. 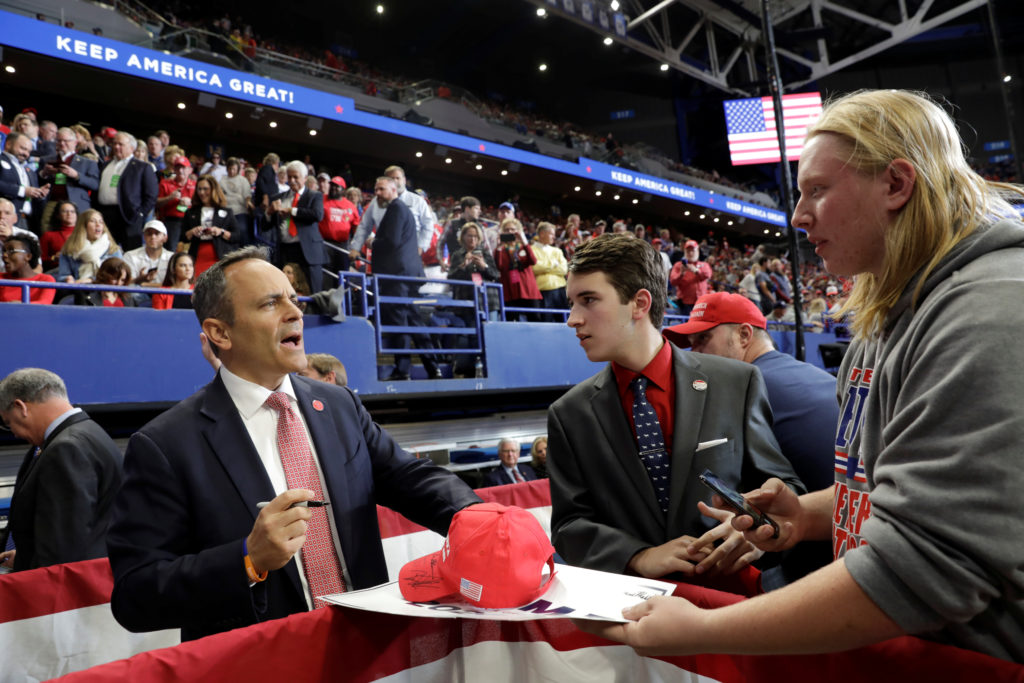 Gov. Matt Bevin signs autographs at a campaign rally at the Rupp Arena in Lexington, Kentucky, on Nov. 4, 2019. Photo by REUTERS/Yuri Gripas

Amy McGrath, who announced a run in June, is considered a strong contender, but any fight against McConnell will be an uphill battle because he will be, as always, well-funded. And, of course, Trump who remains popular in the state, will be on the ballot.

Meanwhile, Beshear is claiming victory and promising to work on the issues he campaigned on, including improving Medicaid coverage, restoring voting rights to felons and protecting pensions for state workers. Bevin is not conceding, however.

Bevin’s campaign, citing reports of irregularities, is officially requesting the secretary of state, Democrat Alison Lundergan Grimes, conduct a “recanvass,” or a recheck of vote count, to “ensure that every lawful vote was counted.” A recanvass is not an official recount, and one has never changed the outcome of a Kentucky gubernatorial election.

Kentucky does not have an automatic recount provision. A measure to require one failed to make it through the state senate earlier this year, leaving Bevin to ask the courts for one within 10 days. He will also have to agree to pay for it.

The Associated Press contributed to this report.