Investigations into Russian election interference and potential collusion have hung over Donald Trump since early in his presidency. But it wasn’t until last week, 18 months after special counsel Robert Mueller launched his investigation, that federal prosecutors directly linked Trump to a crime: campaign finance violations.

The connection was made public last week in court documents from federal prosecutors in New York, who wrote that Michael Cohen orchestrated hush money payments to two women who alleged affairs with Trump “in coordination with and at the direction” of the president.

Cohen was sentenced Wednesday to three years in prison for several crimes, including the payments to adult film star Stephanie Clifford and model Stephanie McDougal, which prosecutors argued were campaign donations that exceeded the federal limit.

Trump fought back Thursday, tweeting that he “never directed Michael Cohen to break the law.”

Right now, it looks like the biggest legal exposure President Trump has is on the campaign finance front.

But the court documents from federal prosecutors and attorneys for special counsel Robert Mueller, along with Cohen’s sentencing, have raised new questions about whether Trump could be indicted or even convicted for his alleged role in the hush money scandal.

“Right now, it looks like the biggest legal exposure President Trump has is on the campaign finance front,” said Ciara Torres-Spelliscy, a law professor at Stetson University who focuses on campaign finance issues.

Can a sitting president be indicted?

Whether a sitting president can be indicted is still an open question.

No court has addressed the question directly. However, two Department of Justice memos, from 1973 and 2000, established internal guidelines that say a sitting president is immune from both indictment and criminal prosecution because it would “unduly interfere” with the president’s ability to perform his constitutional duties.

Because of those guidelines, it is unlikely that the Justice Department would indict Trump while he occupies the Oval Office.

The attorney general or the Justice Department’s Office of Legal Counsel could reverse its policy, but likely only in an extremely unusual situation, said Marty Lederman, a Georgetown University law professor.

“I doubt they’d ever even ask that question except in a rare, and so far, completely hypothetical case in which an indictment were necessary to preserve the possibility of a trial,” said Lederman, who worked in the Office of Legal Council under presidents Bill Clinton, George W. Bush and Barack Obama.

In the 1990s, special counsel Kenneth Starr entertained the idea of indicting Clinton, going so far as to request a memo from a conservative law professor who concluded that indicting the president would be constitutional. But Starr never brought an indictment. 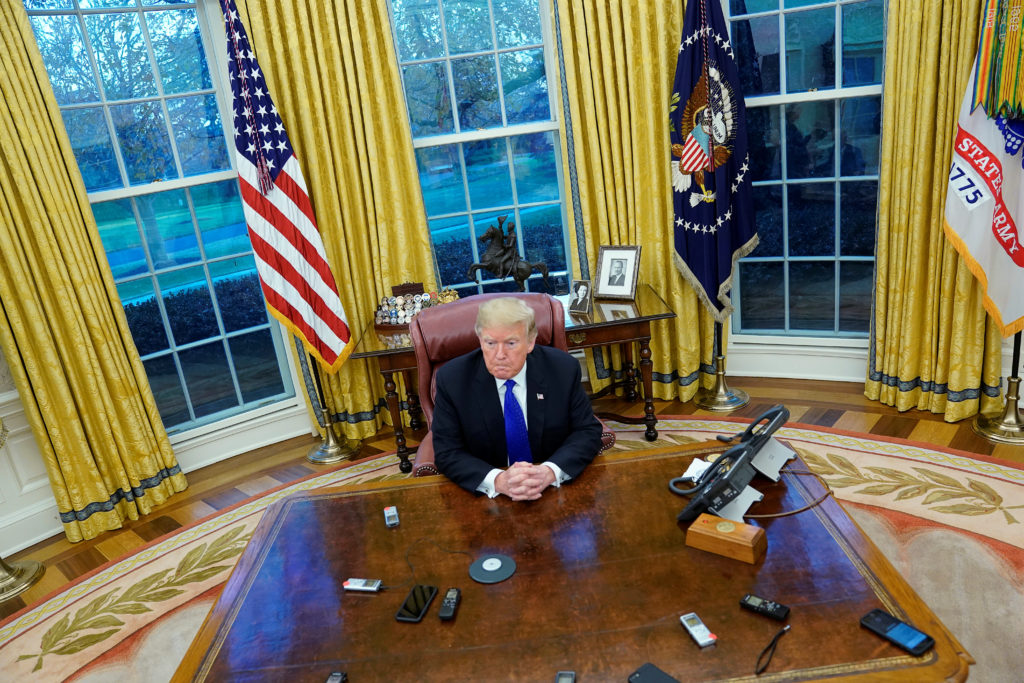 President Donald Trump answers questions in the Oval Office. Guidance from the Department of Justice’s Office of Legal Counsel says a sitting president cannot be indicted.
Photo by Jonathan Ernst/Reuters

The statute of limitations for campaign finance laws requires prosecutors to issue an indictment within five years of when the alleged crime was committed. In Trump’s case, because the hush money payments Cohen orchestrated were made in August and October of 2016, the statute of limitations expire in 2021. If Trump did not win reelection in 2020 and left office in 2021, prosecutors could still indict him that year.

In the meantime, a state attorney general could bring a case against Trump while he is in office because states are not be bound by the same Justice Department restrictions. However, there is no legal precedent for such a lawsuit, and it’s unclear whether a federal judge would allow the case to proceed.

Congress could also take action. The constitution grants Congress the authority to impeach a president for “treason, bribery, or other high crimes and misdemeanors.” The constitution did not specify what qualifies as “high crimes and misdemeanors,” leaving it up to Congress to decide on a case-by-case basis. Some lawmakers have interpreted the phrase to mean indictable offenses. Others take a broader view and argue it includes actions that violate the public trust.

Republicans have dismissed impeachment proceedings outright and downplayed the seriousness of the campaign finance violations. Democrats shied away from talking about impeachment leading into the 2018 midterm elections, but some have revived the idea in the past week. Incoming Judiciary Committee chairman Rep. Jerry Nadler, D-N.Y., this week said if Trump directed the payments, “they would be impeachable offenses.”

While the issue of a presidential indictment or impeachment remains unsettled, questions are already swirling about what a case against the Trump would look like if it were to move forward.

Prosecutors have alleged the $130,000 payment Cohen made to Clifford, who is known as Stormy Daniels, was illegal because it exceeded the $2,700 limit on campaign contributions by individual donors.

The $150,000 payment to McDougal, which Cohen arranged but was made by the National Enquirer parent company American Media Inc., broke the law that bans corporations from contributing directly to campaigns. American Media Inc. on Wednesday entered into a separate plea agreement for its role in the alleged crime.

The payments were also not reported on the Trump campaign’s financial disclosure forms.

Cohen has testified that Trump knew about the payments beforehand and that they were made for the purpose of influencing the election.

“Assuming [Cohen] is credible, and there may be corroborating evidence, then you have a very strong case,” said Larry Noble, a former general counsel for the Federal Election Commission. 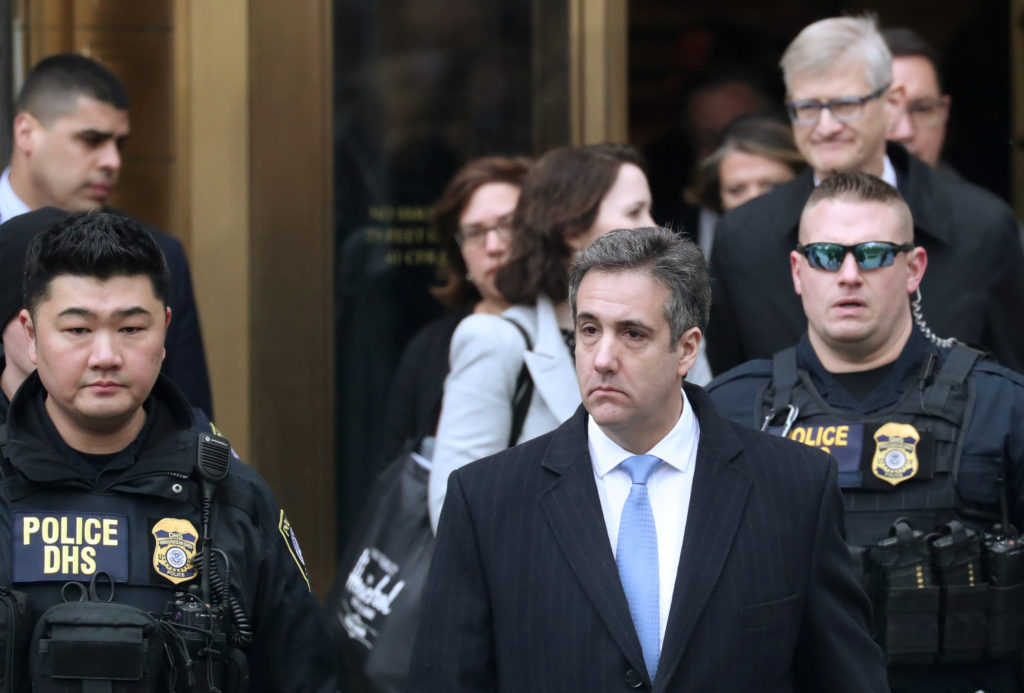 But a key witness was not enough to convict former presidential candidate John Edwards, who was indicted on similar charges in 2011. Prosecutors alleged he used campaign donations, which were above the legal limit, to pay off his mistress to conceal their affair.

One of his aides, Andrew Young, testified that Edwards had directed him to make the payments.

Edwards’ lawyers argued at the time that the hundreds of thousands of dollars used for the payments were personal gifts, not campaign contributions. The defense also argued that payments did not substantiate a “knowing and willful violation” of the law — the threshold prosecutors must prove to convict someone of campaign finance crimes.

In the end, a federal jury found Edwards not guilty on one charge and deadlocked on five other counts. The judge declared a mistrial, and Edwards was never retried.

“I think common sense tells us that paying blackmail money is not a campaign expense,” said Brad Smith, a former chairman of the Federal Election Commission who now heads the Institute for Free Speech, a nonprofit that supports loosening restrictions on campaign contributions.

Smith noted that when courts have interpreted campaign finance law in the past, they have defined the key phrase “for influencing an election” narrowly for fear that nearly every action taken during a campaign could be interpreted as an attempt to sway voters.

Trump’s strongest argument against a potential campaign finance charge is that the payments to the women would have been made regardless of the campaign, Smith added. Trump’s lawyer Rudy Giuliani made the same argument in a Fox News interview in May and Trump repeated the defense Thursday. “This was not campaign finance,” he tweeted.

But Noble said any efforts by the president to cover up the payments could also serve as evidence that he knew they were illegal.

Any efforts by the president to cover up the payments could serve as evidence that he knew they were illegal.

But any attempt to cover up an action by a president or presidential candidate, whether legal or illegal, can pose its own problems.

The House impeached Clinton not because of his extramarital affair with White House intern Monica Lewinsky, but on the grounds of perjury and obstruction of justice.

Special counsel Robert Mueller is reportedly investigating whether Trump obstructed justice when he considered firing Mueller earlier this year. Trump has also expressed concern that in answering Mueller’s questions he could be caught in a “perjury trap.”

What Watergate can teach us

While experts urged caution in drawing too many parallels between the Watergate scandal and the Mueller investigation, they say the similarities are hard to ignore.

“The idea that a president might be involved in campaign finance crimes is something we have seen before,” said Torres-Spelliscy, the Stetson University law professor.

In 1974, Herbert Kalmbach, President Richard Nixon’s former personal lawyer, was sentenced to six to 18 months in prison and fined $10,000 after pleading guilty to illegal fundraising activities.

Three years earlier, Congress had passed the Federal Election Campaign Act to overhaul the nation’s campaign finance laws. After the Watergate scandal, Congress amended the law to limit the size of individual contributions to candidates and close loopholes in campaign finance laws that were exploited by the Nixon administration.

Kalmbach pleaded guilty to two specific charges, but he was tied to a number of other questionable dealings, including a donation from the financier Robert Vesco. Vesco donated briefcases full of cash to Richard Nixon’s campaign committee, and some of that money went to pay the men who broke into the Watergate complex in an attempt to bug the offices of the Democratic National Committee. The men were caught, leading to a massive FBI investigation that uncovered a widespread effort by Nixon’s re-election committee to sabotage his political opponents.

Like Cohen, Nixon’s lawyer Herbert Kalmbach was also the one who handled the hush money payments to the burglars and named Nixon as a “co-conspirator.”

Nixon’s campaign committee was also investigated for accepting corporate contributions, which broke the 1907 Tillman Act that prohibits corporations from donating to individual candidates.

Nixon himself was never charged with campaign finance violations, but the host of scandals that embroiled his presidency led to his resignation in 1974.

The campaign finance violations could be a bargaining chip for Mueller, designed to get to the larger issue of Russian government hacking to influence the 2016 election, Akerman said.