When President Donald Trump announced Wednesday that Vice President Mike Pence would oversee the U.S. response to the novel coronavirus, he pointed to Pence’s record as governor of Indiana.

“When Mike was governor … they established great health care,” Trump said, adding that Pence is “very expert” in that field.

But critics have raised concerns about Pence’s handling of another viral outbreak — HIV in rural Indiana — including what they see as a failure to direct enough funding to public health and for allowing his personal religious beliefs to keep him from acting quickly to implement an evidence-based needle exchange program to slow the outbreak.

In 2015, when Pence was governor, a total of 190 people were infected with HIV, most of them in a Southern Indiana town of only 4,200 people. The Centers for Disease Control and Prevention, which stepped in to help Indiana contain the spread, said the situation was “the worst documented outbreaks of HIV among IV users in the past two decades.”

Pence’s defenders say he handled the situation well, coordinating effectively with a variety of local, state and federal stakeholders.

A number of studies have documented issues with the state’s response.

A 2018 study published in the Lancet, a leading medical journal, found that if the state had intervened years earlier based on early warning signs, it could have prevented at least 127 infections.

Another study, funded by the state of Indiana and published in 2016 in the New England Journal of Medicine, found the underlying circumstances of the state’s HIV outbreak, which included widespread opioid and heroin addiction, were not unique to the rural community that was most heavily affected.

Despite the warning signs and a state budget surplus, the Pence administration did not make public health funding a priority, health advocates have said, indicating that the lack of resources to prevent and treat HIV was a major reason for the rapid spread of the disease.

“We had the lowest public health spending per capita in the U.S., and we weren’t pulling down the federal resources that we were entitled to,” said Carrie Lawrence, associate director of the Rural Center for AIDS/STD Prevention at Indiana University.

The lone doctor in the town where the HIV cases were identified had been warning for years that an HIV outbreak in the area was only a matter of time, but resources were not allocated until the disease started to spread quickly. Even then, Lawrence said, the urgency of the situation meant health officials from other counties were being pulled from their own jobs to help stem the spread of the virus, leaving other residents without proper care.

“It’s been an uphill battle to ensure that we are really protecting the public’s health,” Lawrence said.

Democratic presidential front-runner Bernie Sanders added to the criticism Thursday when he called Trump’s response to the virus, including his selection of Pence to lead the response effort, “disgusting.”

But Pence’s defenders say the former governor should not receive the blame for chronic funding issues that go back decades.

“It’s completely fair to say we underfund public health in Indiana,” said Joe Fox, who was the Indiana State Department of Health’s legislative director while Pence was governor. “I don’t think it’s fair to say that is unique to Mike Pence.”

Fox pointed to Pence’s effort to implement a Medicaid expansion program, the Healthy Indiana Plan 2.0. Part of the plan, which went into effect just as the outbreak was occuring, included targeted outreach to people who tested positive for HIV and help with enrollment in health insurance that would cover treatment.

“It’s completely fair to say we underfund public health in Indiana. I don’t think it’s fair to say that is unique to Mike Pence.”

The Healthy Indiana Plan was created through the Affordable Care Act, but differs from Medicaid expansion in other states because it requires people with incomes between 100 percent and 138 percent of the poverty line to pay premiums to get coverage.

Pence declared a public health emergency on March 26, 2015 — more than two months after the new HIV cases were first detected. That emergency order authorized Scott County, the epicenter of the outbreak, to start a needle exchange program, which had previously been banned in the state.

The needle exchanges in Indiana have been credited with slowing the outbreak, but critics say Pence should have taken decisive action earlier and made needle exchanges easier to implement throughout the state.

“The World Health Organization and the CDC have been unequivocal in their recommendation that needle exchanges save lives,” said Leana Wen, a public health professor at George Washington University and the former health commissioner for Baltimore who ran that city’s needle exchange program. 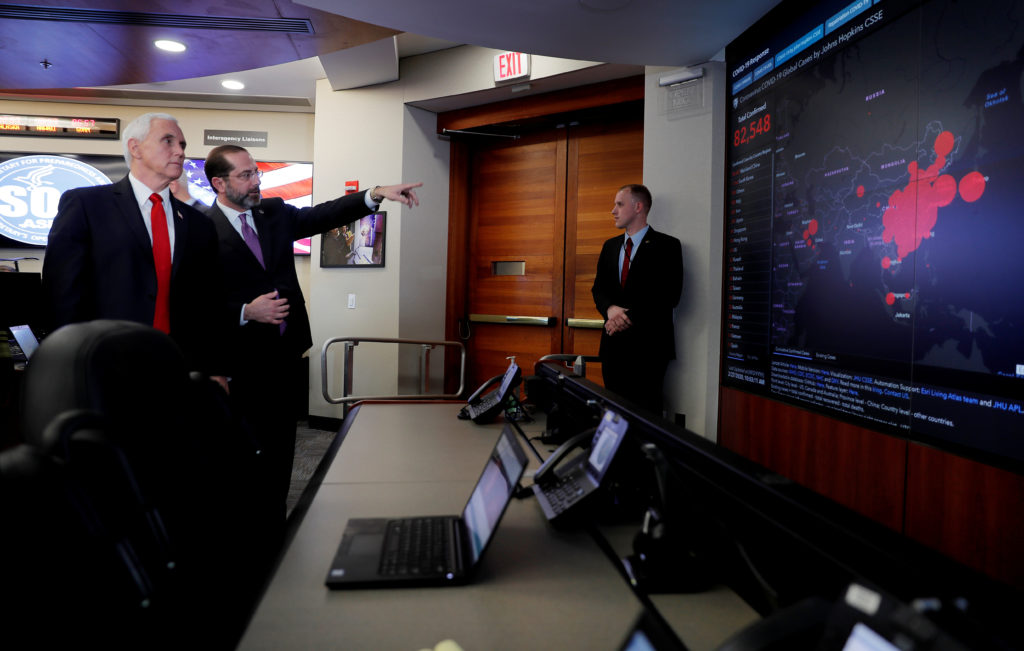 Wen and other public health officials who have been critical of Pence argue the then-governor’s conservative beliefs were behind his hesitancy to approve a needle exchange program despite clear scientific evidence that it would reduce the spread of HIV.

In 2016, The New York Times reported that Pence, who has spoken often about being guided by his evangelical Christian beliefs, said he needed to “pray on it,” before deciding whether to declare the emergency and allow the needle exchange in Scott County. Dr. Jerome Adams, the current U.S. surgeon general and the former head of the Indiana State Department of Health, told The New York Times that Pence “wanted to make sure if we went this route it was absolutely necessary.”

Adams has advocated for needle exchange programs, saying they are proven to be effective, but also said he shared the sentiment of people who “have real moral and ethical concerns about passing out needles to people with substance abuse problems.”

Fox disputes that Pence acted too slowly and said the decision to ultimately suspend the state’s ban on needle exchanges included the difficult task of getting buy-in from local officials who had also expressed concerns about an exchange.

“These things were illegal and unwelcome until there was an emergency,” Fox said.

Still, Wen said Pence’s decisions in Indiana makes her worry about how he might handle a fast-spreading outbreak like novel coronavirus.

“We don’t know where this coronavirus outbreak is going to take us. What we know is it is a quickly evolving situation where decisions must be made under time pressure,” she said, adding that Pence’s background makes her question whether “he can actually put science over ideology.”

Pence on Thursday took his first action in his new role heading up the novel coronavirus response effort when he led a virus task force meeting.

“My presence here today and working with you each and every day in the days ahead, I hope gives evidence to the priority the president has placed on this work and our desire that the resources, information and recommendations are conveyed not only to the public but also to our partners at the state and local level,” Pence said.

Pence also took the step of appointing another person — Debbie Birx — to serve as his chief adviser on the novel coronavirus response. Birx currently serves as the U.S. global AIDS coordinator.