What Super Tuesday data tells us about who voted and why

Young voters and black voters were two of the demographics that helped former Vice President Joe Biden and Sen. Bernie Sanders emerge as the clear front-runners on Super Tuesday. But how voters made decisions around issues like health care and electability were more complicated, highlighting some of the challenges the two candidates will face in the final months before the Democratic Party convention.

Surveys from APVoteCast — conducted by NORC at the University of Chicago for the Associated Press and Fox News — suggested that Sanders continued to do well with young people, gaining support from 60 percent of voters under the age of 30 in Colorado and California. In that state, Sanders’ ground game paid off among his core supporters, but last-minute voters narrowed his margin of victory over Biden.

READ MORE: Can Biden keep the momentum? His supporters have advice

Here’s a closer look at what else was driving voters in Super Tuesday states, and what it could mean as the 2020 race continues.

A high share of voters with college degrees turned out for Biden.

Biden was projected to win in Virginia as soon as the polls closed, and part of that success was strong support from voters with some level of higher education. 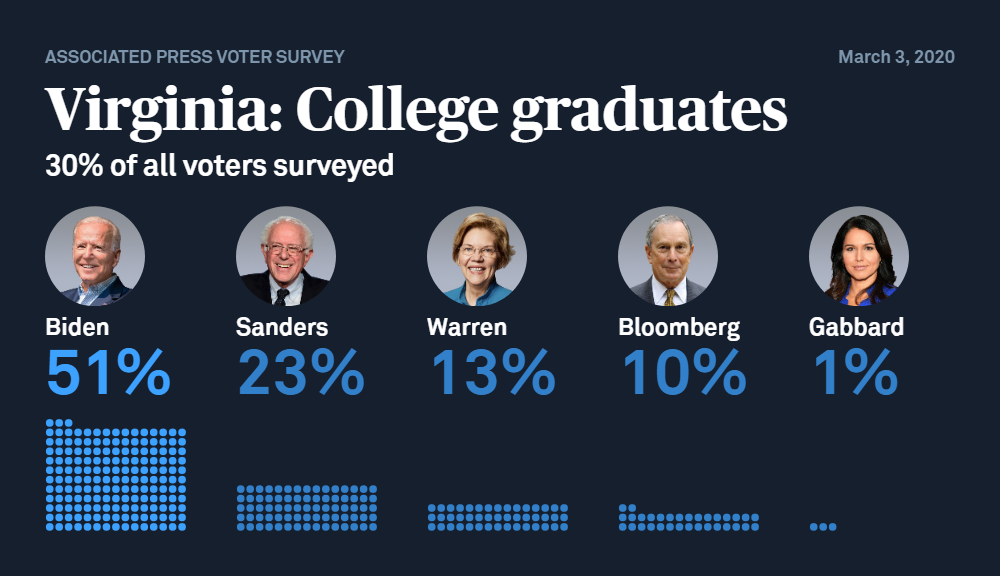 As NewsHour politics correspondent Lisa Desjardins tweeted, Virginia’s share of primary voters who have a college or postgraduate degree — 54 percent — was significantly higher than the national average of about 35 percent. Around 51 percent of these voters with some level of higher education turned out for Biden. Sanders captured around half as many voters with a college degree, at 23 percent.

Biden’s appeal among voters with the most education does not necessarily mean he struggles to attract voters with less education. In another southern state, North Carolina, he secured 48 percent of voters with a high school degree or less, compared to Sanders’ 29 percent.

But in other states, like California, Sanders had more support among these less-educated voters than Biden, leading him by more than 15 points.

Voters were most passionate about health care — and they voted for Biden.

Biden and Sanders have campaigned on decidedly different health care plans. The former vice president favors improving the Affordable Care Act — the landmark achievement of the Obama administration — along with creating a public option that would cost $750 billion over a decade. Sanders wants to radically overhaul the U.S. health care system with a universal “Medicare for All” plan that would eliminate private insurance and cost, by one estimate, $34 trillion over that same period of time. 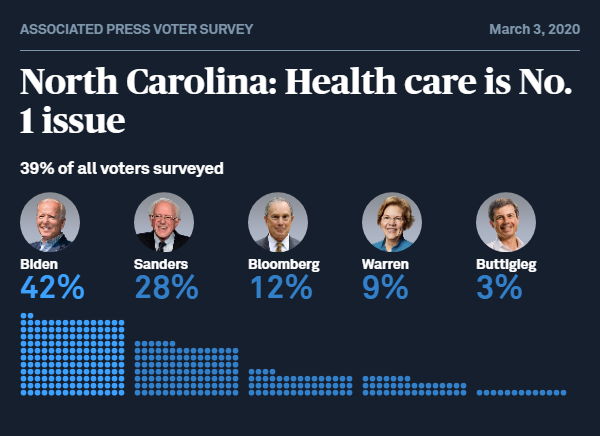 North Carolina voters who said that health care was the most important issue facing the country favored Biden by a 14 point margin, with 42 percent saying they supported the former vice president and 28 percent backing Sanders. Massachusetts Sen. Elizabeth Warren, who has campaigned on a Medicare for All plan not unlike Sanders’, received only 9 percent of support among these voters. Former Mayor Mike Bloomberg, who dropped out of the race after he failed to gain enough support on Super Tuesday, had a public option proposal similar to Biden’s, and received 12 percent of support among voters whose No. 1 issue was health care.

“In North Carolina, voters who thought health care should be tweaked rather than completely upended meant that they wanted Joe Biden,” said the NewsHour’s White House correspondent Yamiche Alcindor, who reported from that state on Tuesday.

Voters who say it’s important to have a woman president in their lifetime still favored male candidates.

Warren did not win her home state of Massachusetts, coming in third behind Biden and Sanders.

Adam Reilly of WGBH called the loss a “huge blow” to the Warren campaign, saying that many voters who wanted to vote for the Massachusetts senator may have gotten “caught up in playing private pundit,” calculating which candidate they thought was best equipped to beat President Donald Trump, rather than supporting the one who most aligned with their ideals. 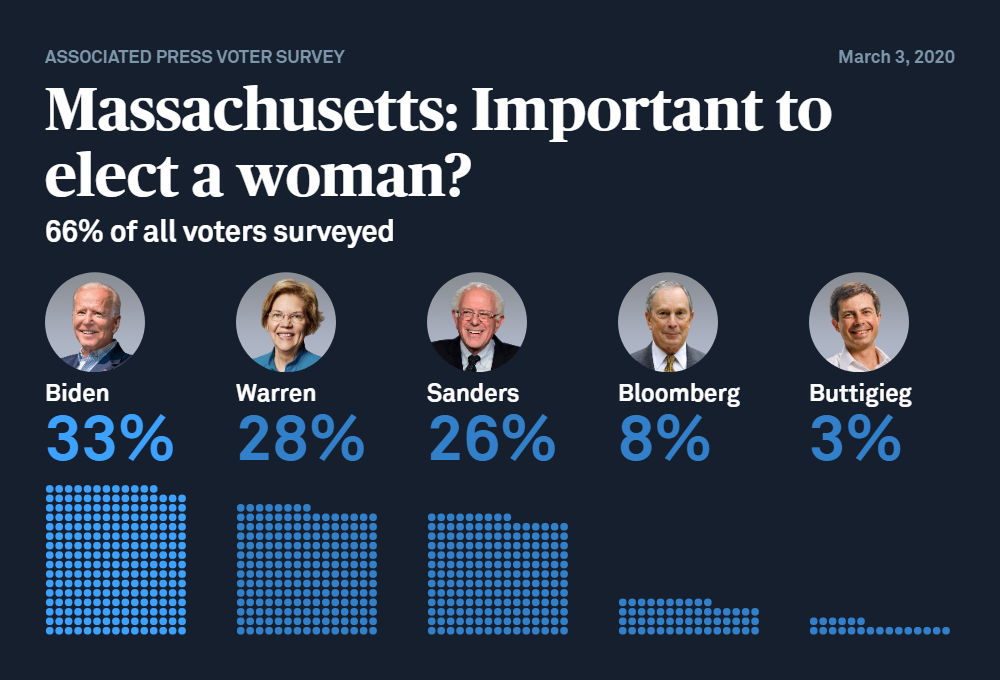 Was gender a factor in voters’ calculation? Of the 55 percent of Massachusetts respondents who said they believed it would be harder for a female Democratic candidate to beat Trump in November, 22 percent still supported Warren. But 34 percent favored Biden.

In addition, a majority of Massachusetts respondents — 66 percent — said it was important that the U.S. elect a woman president in their lifetime. But a similar number — 59 percent — said they were supporting male candidates, Biden and Sanders. That’s compared to 28 percent who said they voted for Warren.

Voters in Tuesday’s primaries had fewer candidates still in the race than initially expected, after Minnesota Sen. Amy Klobuchar and former Mayor Pete Buttigieg dropped out this week. Buttigieg’s and Klobuchar’s endorsements of Biden on Monday helped propel Biden’s victory in states like Minnesota, where many Klobuchar supporters were ultimately swayed to vote for the vice president. 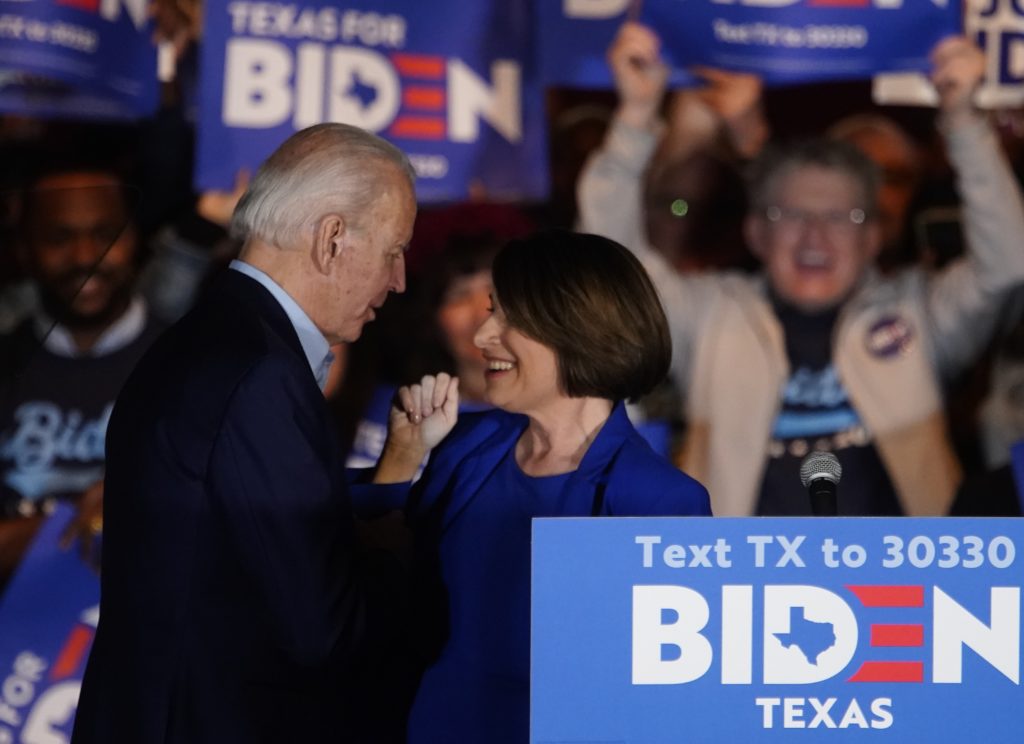 There, most voters who said they would be either “satisfied” or “very satisfied” if Klobuchar secured the Democratic nomination ended up supporting Biden. Among the Minnesota senator’s strongest supporters — those who said they’d be very satisfied with her — 49 percent said they had cast votes for Biden instead.

Mary Lahammer of Twin Cities PBS noted that Biden credited the Minnesota senator for his win there. “Now the question we have to ask is what’s next for Amy Klobuchar … maybe she’s in consideration for vice president. She’d bring some geographic and gender balance,” Lahammer said.

Sanders secured the young Latino vote, but Biden’s margin of support was higher among older Latinos.

Sanders invested a significant amount of time and resources into Texas, home to a large and diverse community of Latino voters. Last month, Sanders’ support among Latinos paid off in Nevada, where he secured more than 50 percent of their votes. In Texas, the senator did well with Latinos aged 18-44, at 53 percent, but a significant generational divide made Biden the winner. 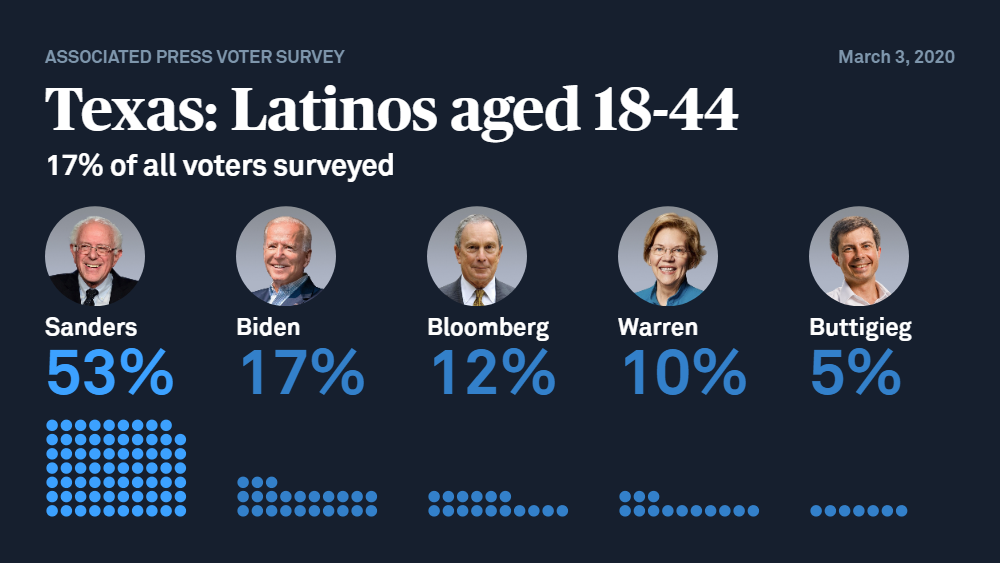 According to these exit polls, 37 percent of Latinos aged 45 and older voted for Biden in the Texas primary, while 25 percent voted for Sanders.

Rep. Sylvia Garcia, D-Texas, told NewsHour senior digital politics reporter Daniel Bush about the appeal that Biden may have among some of these older Latino voters, saying that this community is “very family-oriented, and we connected with Biden because he’s very family-oriented and he’s Catholic like many of us.”

It’s also important to note that while many Latinos favor policies that Sanders has campaigned on, such as raising the minimum wage to $15, more than a third still affiliate with or lean toward the Republican Party, and many among this group do not believe, for example, that the federal government should provide universal health care or have a stronger hand in solving the nation’s problems overall.

Sanders won, but voters who decided in the last few days went to Biden.

While Sanders scored a decisive victory in the California primary, many last-minute voters were swayed by Biden’s recent success in South Carolina and voted for the former vice president. Of the 31 percent of respondents who said they had decided whom to vote for in the last few days, 38 percent voted for Biden and 20 percent voted for Sanders. 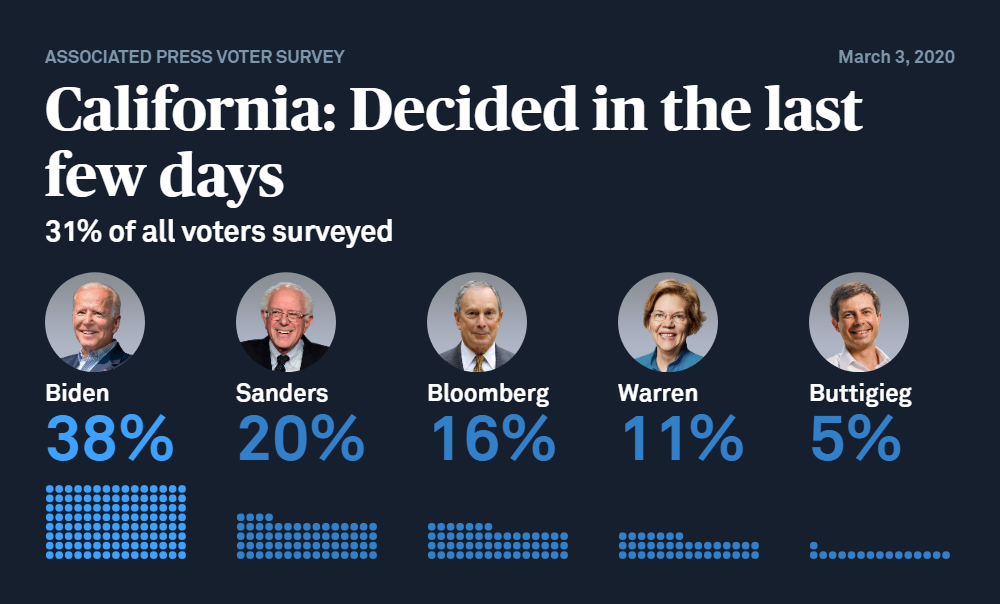 This represented a huge shift from voters who had made a decision less recently, over the last month. Among those respondents, just 13 percent voted for Biden, who trailed behind Sanders, Bloomberg and Warren with this group.

Biden’s haul of these last-minute voters helped him reach the 15 percent threshold in California, narrowing the margin of convention delegates from this state that Sanders will receive over his competitor, and setting up the two well-known politicians for a tight battle over the nomination.

Left: Voters make their choices for Democratic presidential nominee during Super Tuesday elections at a polling place inside Assumption Church in the Boyle Heights neighborhood of Los Angeles on March 3, 2020. Photo by REUTERS/Kyle Grillot