Can Biden keep the momentum? His supporters have advice

HOUSTON — In a matter of days, the mood among Joe Biden’s supporters has shifted from widespread panic that his candidacy might flame out, to a growing sense of optimism that the former vice president can hold off a progressive challenge from Sen. Bernie Sanders and win the Democratic presidential nomination.

The voters who backed him have bought into his message that he can unite the country and that he has the best chance of beating President Donald Trump in the general election in November.

But in taking stock of a stunning four-day stretch that saw Biden score major victories in a swath of states, his supporters see areas for improvement in order for him to maintain that newfound momentum in what could be a grueling, drawn-out primary race.

“Give us a little more so we know it’s not empty promises. Give us some substance.”

In interviews over the last week with voters in South Carolina and Texas, a key Super Tuesday state that Biden carried, supporters cheered his recent surge. But Democrats who backed the notoriously gaffe-prone, 77-year-old Biden also expressed hope he could find a new gear in the days and weeks ahead.

“His people need to tell him to fire it up,” Florence Coleman, a retired public school teacher, said after attending a Biden rally in Houston the day before Super Tuesday.

Coleman was thrilled to see Biden and said his authenticity came through clearly in person. But Coleman said his speech — a rambling affair that included Biden referring to Super Tuesday as “Super Thursday” — left her wondering about his overall energy level and ability to stay on script.

And while Coleman did not mention his age directly, that has been a cause of concern for voters assessing a field that is now dominated by septuagenarian candidates. (The only Democrat left in the race under the age of 70 — and also the only non-white candidate — is Rep. Tulsi Gabbard of Hawaii, who earned a single delegate on Tuesday from American Samoa.)

To Coleman, Biden “looked like he was tired. He told the same stories.” When asked what he might do differently, she said: “Add some new illustrations, and talk faster with more energy.”

Myla Williams, a retired World Bank worker from Maryland who drove down to South Carolina to knock on doors for Biden in the final days of the primary race there, said she was “elated” to see Biden start winning after Sanders was the leading vote-getter in the first three 2020 nominating contests.

“I’m a pragmatic Democrat,” Williams said after watching Biden speak at his primary night rally in Columbia, South Carolina. “You’ve got to be able to get stuff through Congress.”

Williams said she believed Biden was the best candidate in the primary race. But she said Biden will need to flesh out his policy ideas more in order to win over Democrats who remain opposed to his candidacy. 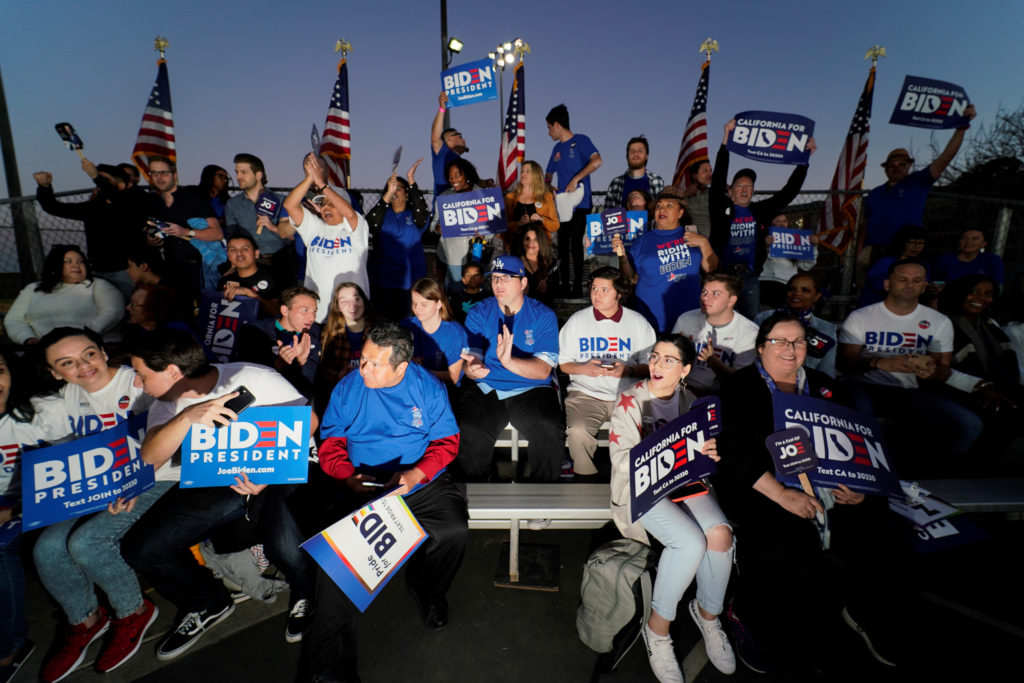 “If he talks about building on the legacy of Obama, he needs to get more specific about his vision in terms of policy,” Williams said. “I think he has a lot of ideas, but he needs to get them out there.”

Other Biden supporters agreed. “Give us a little more so we know it’s not empty promises. Give us some substance,” said Wanda Marshall, a retired social worker who volunteered for Biden in South Carolina.

Biden’s campaign website includes a laundry list of policy proposals on education, health care, immigration reform and numerous other issues. And Biden does touch on some of his plans in speeches. But he often paints in broad brush strokes rather than offering concrete details.

To connect with voters on the campaign trail, Biden also leans heavily on his life story of overcoming a hardscrabble upbringing and personal tragedy. He peppers his speeches with familiar, folksy quotes from his father about the value of hard work and standing up in the face of adversity.

Doug Peterson, a retired NASA worker from Houston, said Biden’s life experience provides a powerful contrast to the current president. Unlike Biden, Trump rarely opens up in public about his family or his personal life and struggles, instead touting his accomplishments and airing grievances.

But family stories will only get Biden so far, said Peterson, who backed the former vice president in Texas. “People don’t want to hear a 10-minute story. They want to hear about policies and what you’re going to do.”

READ MORE: Joe Biden on how Joe Kennedy and Hagar the Horrible helped him deal with grief

Some Biden allies pushed back on the notion that the former vice president needs to elevate his performance in speeches or debates. He has not been sharp in the debates, but some backers argued Biden shines best where it matters most: interacting directly with voters on the campaign trail.

“I don’t know what I would advise him to do differently,” Nick Lampson, a former congressman from the Houston area, said in an interview ahead of Super Tuesday. “I love the enthusiasm. I love the stories he tells. I think it’s moving when he talks about the loss of his wife and children.”

Biden’s first wife, Neila, and their 1-year-old daughter died in an automobile accident in 1972. His son Beau Biden, who served as the attorney general of Delaware, the Biden family’s home state, died from brain cancer in 2015 at the age of 46. Biden cited the death in his decision not to run for president in 2016.

Four years after Beau’s death, Biden launched his third presidential bid. His first two attempts in 1988 and 2008 ended without Biden winning a single presidential primary or caucus. This time, winning the nomination appears like a distinct possibility, so long as Biden can hang on.

“Vice President Biden has a tremendous story,” Democratic Texas state Rep. Trey Martinez Fischer said. But if voters want more, Biden should heed their call, he said. “It would serve the vice president’s campaign and senior staff really well to embrace the opportunity to take constructive criticism and make those improvements.”

READ MORE: History says the odds are against repeat presidential candidates like Biden and Sanders. Here’s why