Brazil elected a far-right president. What can the world expect?

The U.S. State Department issued a statement congratulating Bolsonaro on Sunday, saying the U.S. anticipates “working together to address the 21st century’s most pressing global and regional challenges.”

While Bolsonaro’s anti-establishment speeches and populist style, in addition to his praise of the military dictatorship that he once served, drew support among those seeking strong leadership, they stoked fears among others that he was putting Brazil’s democracy in danger.

Following a presidential campaign that indulged in personal attacks over policy discussions, analysts say that Bolsonaro now must develop a plan to run the country after he takes office on Jan. 1.

Bolsonaro is a 63-year-old former army captain who served in Brazil’s Congress for nearly 28 years. Some have compared him to President Donald Trump and Philippines President Rodrigo Duterte because of his inflammatory campaign rhetoric and other controversial remarks. In one instance, he told a fellow lawmaker, “I would not rape you because you are not worthy of it.” In another case, he said he would rather have a son who was an addict than who was gay.

During the campaign, he threatened to dispose of his rivals. “Either they go overseas or they go to jail.”

His victory was hailed by supporters of his Social Liberal Party, but human rights advocates expressed concern about the track he might take on the country’s most pressing social issues, including “increasing intolerance, violence, racism, sexism, homophobia and repression against progressive movements, universities and indigenous communities,” said Maria Luísa Mendonça, director of the Network for Social Justice and Human Rights in Brazil. “We need international solidarity to protect democracy and basic rights in our country” rather than Bolsonaro’s “discourse of hate,” she said.

During the campaign, he threatened to dispose of his rivals. “Either they go overseas or they go to jail,” he told a cheering crowd.

But after winning the election, Bolsonaro immediately began to tone down his campaign rhetoric, said Paulo Sotero, director of the Brazil Institute at the Wilson Center. He vowed to uphold the constitution, which includes protections for human rights, Sotero said.

Bolsonaro has backtracked on his talk of withdrawing Brazil from the Paris climate agreement — with conditions that include guaranteeing Brazilian sovereignty over indigenous lands. Though he may stick to the Paris accord, the president-elect is expected to maintain a pro-business, pro-development stance on the environment, such as expanding nuclear and hydroelectric operations into the country’s vast Amazon forest.

Watch a September report from Brazil’s Maranhao State, where indigenous groups are fighting to protect the region’s remaining and fragile Amazon rainforest.

In addition, Bolsonaro probably will walk back his campaign promises to relocate the country’s embassy in Israel from Tel Aviv to Jerusalem, as the United States did earlier this year, Sotero said, because of the damage it might do to the country’s significant meat exports to Arab countries in the Middle East.

When making decisions, Bolsonaro favors personal connections and relies on his inner circle, including close family members, certain major investors and the army generals he knew when he served, according to Brazilian columnist William Waack. These select few will be weighing in on government matters, including “telling him which ministers to appoint.”

What does his win mean for Brazil and beyond? 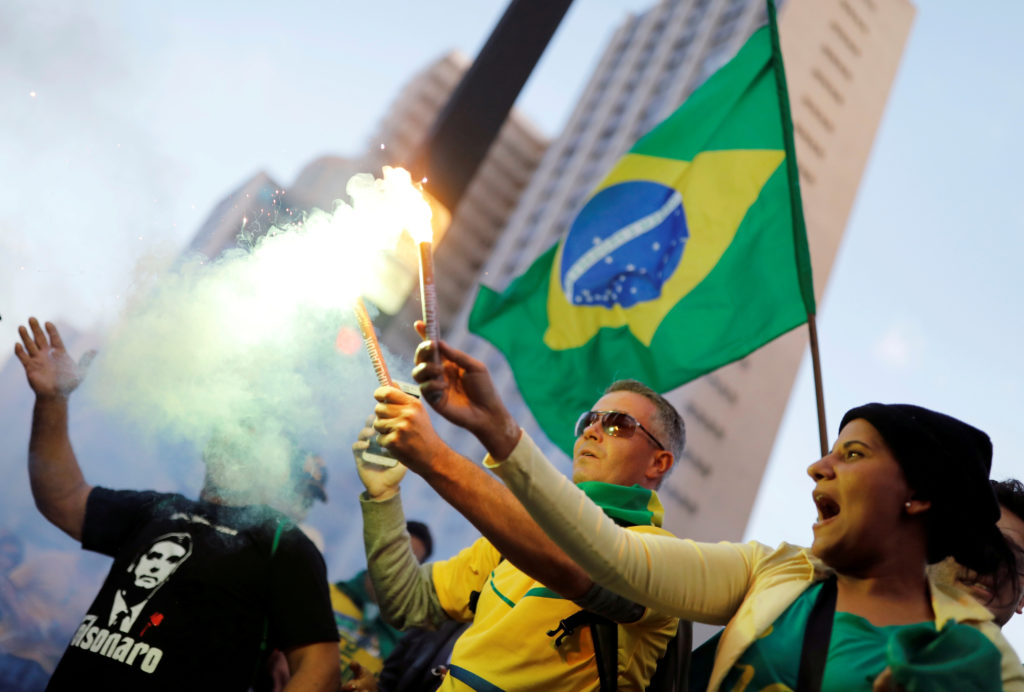 In Brazil, the world’s fourth largest democracy, the election of Bolsonaro comes amid a tumultuous political era, including the impeachment of Brazil’s former president Dilma Rousseff in 2016 and the jailing of her predecessor, the popular Luiz Inacio Lula da Silva.

Even though Bolsonaro enjoyed a clear election victory, his challenges have just begun, according to Christopher Garman and his fellow Brazil analysts at the Eurasia Group. The incoming president faces an ailing economy, high unemployment and corruption among government and business ranks.

Given that Bolsonaro’s most important economic challenge will require constitutional changes, “the result is likely to be mixed.”

“Given Bolsonaro’s most important economic challenge rests on approving deep fiscal reforms that require constitutional changes, the result is likely to be mixed,” Garman said. Bolsonaro’s market-friendly economic team is expected to endorse much-needed pension reforms, for example, but they likely will be modest in scope, in light of the congressional resistance, he said.

Bolsonaro also inherits a rise in violent crimes. In 2017, the nation of 207 million people broke its own record for homicides: 63,880. “Those are warzone numbers,” Sotero said, adding that part of the reason Bolsonaro won the election was because he convinced voters that he would be tough on crime.

The president-elect was himself a victim of politically motivated violence when he was stabbed at a campaign rally in September.

Meanwhile, in the rest of Latin America, Bolsonaro’s win met with congratulations from leaders of neighboring countries, including from Venezuelan President Nicolas Maduro, who is grappling with crippling economic turmoil in his own country, Sotero said.

In terms of relations with the U.S., where Bolsonaro’s felicitations included a phone call from Trump on Sunday night, the future is uncertain, columnist Waack said. “I’ve been a foreign correspondent for over 20 years, and I’m wondering myself in which direction this new government will go.” Bolsonaro has already reversed his stances on several foreign affairs issues; “I think he’s learning a bit” and refining his geopolitical stances, Waack added.