What we know about the suspicious packages suspect

A Florida man has been charged with five federal crimes in connection with a string of suspicious packages with possible explosive devices that targeted Democratic public figures.

At a news conference Friday, officials identified the man as 56-year-old resident of Aventura, Florida. Authorities did not comment on whether there are additional suspects in the case.

The defendant faces up to 48 years in prison for the charges, which include illegally mailing explosives and threatening former presidents. 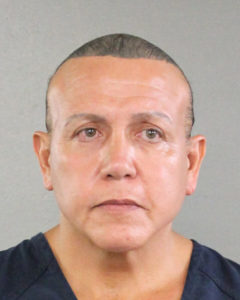 The U.S. “will not tolerate such lawlessness, especially not political violence,” Attorney General Jeff Sessions said at a briefing Friday.

Speaking from a White House event before the charges were announced, President Donald Trump said that “these terrorizing acts are despicable,” and then repeated his call for Americans to “unify.”

The packages, discovered this week and intercepted in several states across the country, have raised concerns over political violence and rhetoric less than two weeks before the 2018 midterm elections.

Here’s what we know so far about the suspect and his connection to the suspicious packages.

During a briefing Friday in New York, FBI Director Christopher Wray said the investigation is still ongoing and could not immediately answer questions about the suspect’s motive.

At least 13 improvised explosive devices, or IEDs, were sent to various individuals across the country, officials said.

The first package was retrieved Oct. 22 at the mailbox of liberal philanthropist George Soros’ suburban New York home. More packages emerged throughout the week. Other figures targeted by the packages, which contained possible explosive devices, include President Barack Obama, former Secretary of State Hillary Clinton and former Vice President Joe Biden, among others. Authorities have said there could have been more packages circulating in the mail system.

All the packages shared similarities. Wray said each device consisted of about six inches of PVC piping, a small clock, a battery, wiring, and “energetic material” that reacts to heat, shock or friction. Investigators are still analyzing devices, Wray said, adding that these were not “hoax devices.”

Several of the package contained photographs of the targets with a red “X,” according to a criminal complaint.

None of the devices exploded. There were no injuries from the packages.

Wray also said that an initial analysis flagged a fingerprint belonging to the suspect from the envelope of one of the two IEDs that targeted Rep. Maxine Waters. A DNA analysis involving two different IEDs also connected them to the suspect, Wray said.

Sayoc faces five charges, according to a criminal complaint:

“Today’s arrest doesn’t mean we’re out of the woods,” Wray said, adding that there may be other packages circulating through the mail system.

Who is the suspect?

During a briefing Friday in New York, federal authorities identified the man in custody as Cesar Altieri Sayoc, 56, of Aventura, Florida, a city about 20 miles north of Miami.

According to the criminal complaint, Sayoc was “arrested on or about October 26, 2018, in Florida, in the vicinity of his white van.”

The document also said the windows of the van “were covered with images including images critical of CNN.”

Sessions said the suspect “appeared to be a partisan,” but declined to comment more about why he targeted Democratic leaders. Officials reiterated that it was too soon to discuss motive at this point in the investigation.

When asked whether the suspect acted alone, Wray told reporters that “we do believe we’ve got the right guy, but we also know there is an ongoing investigation.”

The PBS NewsHour’s Geoffrey Guray and Courtney Norris contributed to this report.

Editor’s note: Attorney General Jeff Sessions initially announced the charges carried a possible 58 years of prison time. The DOJ later revised that number to 48. This story also incorrectly referred to PVC piping as “PCP piping.” It has been updated to correct to error.

Left: First respondents are seen on the scene where a suspicious package was found in Midtown, Manhattan, on October 26, 2018. A Florida man has been charged with five federal crimes in connection with a string of suspicious packages with possible explosive devices that targeted Democratic public figures this week.