What we know about Trump’s second impeachment trial

House Democrats have delivered the article of impeachment against Donald Trump to the Senate, formally starting a trial over the former president’s role in the Capitol attack on Jan. 6.

There are several intermediate steps after the House impeachment managers deliver the article charging Trump with “incitement of insurrection” and before the trial’s opening arguments.

The rules for the trial, including how long it will last and whether witnesses will be allowed to testify, have not yet been finalized. But after several days of debate, the Senate’s Republican and Democratic leaders struck a deal last Friday on the timing of the trial, which is slated to start the week of Feb. 8.

The deal gives the Senate two weeks to focus on confirming President Joe Biden’s Cabinet nominees and work on a coronavirus relief package, the centerpiece of Biden’s early legislative agenda, while also allowing Trump time to prepare his defense.

WATCH LIVE: Article of impeachment against Trump delivered to Senate

But the pending trial looms over the Senate as Republicans weigh whether to break with Trump, who remains deeply popular with the party’s base.

Trump left office last week facing fierce criticism for his efforts to deny and overturn the election results, which culminated in his rallying supporters in Washington and urging them to take their “fight” to the Capitol, where lawmakers were gathered to count Electoral College votes in the final step in acknowledging Biden’s election victory. The ensuing attack left five people dead, among them a Capitol Police officer.

What’s the schedule for the impeachment trial?

After the House delivered the impeachment article, senators were sworn in Tuesday as members of an impeachment proceeding. An official summons for the trial will also be sent to Trump, the first former president to undergo an impeachment trial.

Sen. Patrick Leahy, D-Vt., the Senate’s president pro tempore, was sworn in Tuesday to preside over the trial. Chief Justice John Roberts presided over the last impeachment trial because Trump was a sitting president. But with Trump out of office, the task falls to Leahy, the longest-serving Senate Democrat, instead of Roberts or Harris.

Trump must respond to the charge by Feb. 2, the same day by which House impeachment managers are required to submit their pre-trial brief outlining their case. Trump’s defense team must submit its pre-trial brief by Feb. 8.

The opening arguments of the trial are set to start Tuesday, Feb. 9. However, before they begin, the Senate must approve rules for how the trial will be conducted.

How the trial will be conducted

Trump’s first impeachment trial, which took place early last year, offers some clues for how the upcoming trial could proceed.

In that case, Trump was charged by the House with abuse of power and obstruction of Congress for his efforts to pressure Ukraine’s president to investigate alleged corrupt business dealings by Biden and his son, Hunter Biden.

Republicans controlled the Senate, and approved rules on a party-line vote that gave each side 24 hours over three days to make their case. That portion of the trial lasted six days.

After hearing from both sides, senators spent three days debating the case. Then the Senate voted — also on a party-line GOP vote, without any support from Democrats — not to extend the trial by subpoenaing documents or witnesses. 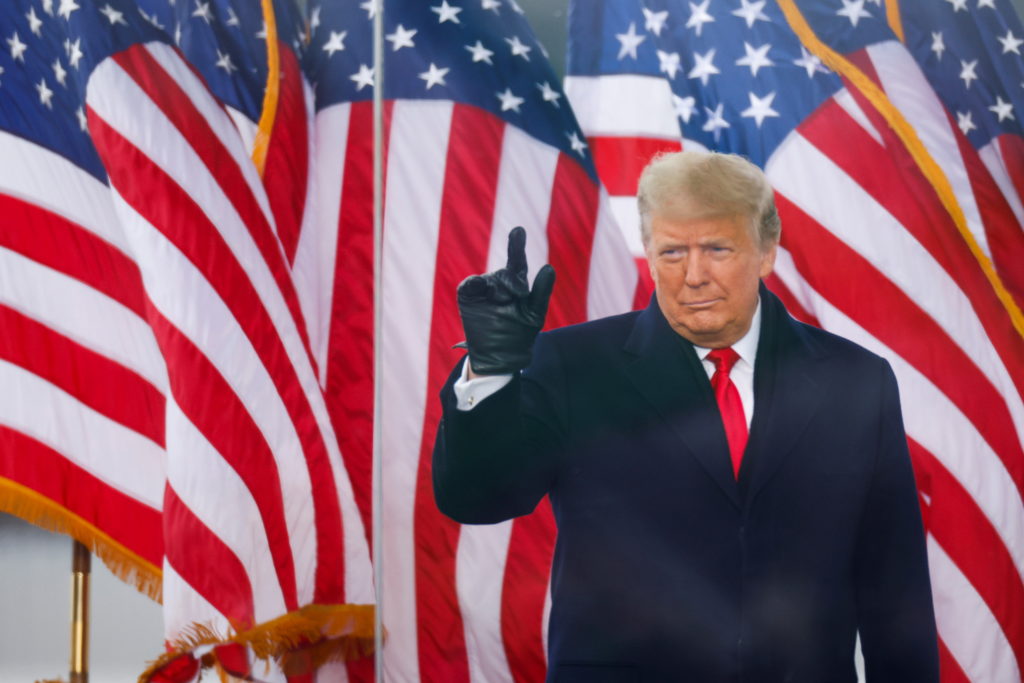 U.S. President Donald Trump gestures during a rally to contest the certification of the 2020 U.S. presidential election results by the U.S. Congress, in Washington, U.S, January 6, 2021. Photo by Jim Bourg/Reuters.

Five days later, the Senate acquitted Trump on both impeachment charges. Sen. Mitt Romney, R-Utah, was the only senator who crossed party lines, casting a vote to convict Trump for abuse of power.

The coming trial will be different from the last in some important ways, due to the new balance of power in the Senate and the unprecedented nature of trying a former president. The first trial lasted roughly three weeks from start to finish. But Democrats have speculated the upcoming trial could be wrapped up much faster, since Trump’s criticism of the election and rally on Jan. 6 — and the attack itself — played out in public and will likely require less investigation to uncover misconduct than the previous trial.

There is reason “to expect that it would go faster,” Rep. Madeleine Dean, D-Pa., one of the House impeachment managers, said on NBC’s “Meet the Press” program Sunday.

This time, with Democrats in control of the Senate, Schumer will have final say on how the trial proceeds. But since the Senate is split 50-50, Schumer has less wiggle room than McConnell did last year, when Republicans held 53 seats and could afford to lose three votes during the course of the trial.

Schumer could push through a party-line vote when setting the trial rules if he can’t strike a deal with his Republican counterpart. But all 50 members of the Democratic caucus would need to approve of his terms in order to give Vice President Kamala Harris the tie-breaking vote.

Finding consensus among Democrats may prove difficult. At least one, Sen. Joe Manchin of West Virginia, has criticized the impeachment effort. Sen. Tim Kaine of Virginia and other Democrats have floated the idea of invoking the 14th Amendment as an alternative method to block Trump from running for federal office in the future.

If the Senate convicts Trump it could then vote separately to bar him from ever holding public office again. But a conviction requires 67 votes, and it’s considered unlikely that at least 17 Republicans will join every member of the Democratic caucus to vote to convict Trump.

Ahead of the trial, some lawmakers have raised questions about whether the Senate has the constitutional authority to try a former president. The Senate has held three impeachment trials for sitting presidents, including the first one against Trump, none of which resulted in a conviction, but none for a president after he has left office. Legal scholars have said precedent exists, but Democrats and Republicans are still debating the issue.

On Tuesday, after senators were sworn in as members of an impeachment proceeding, the Senate voted 55-45 to table an objection to the trial raised by Sen. Rand Paul, R-Ky., who argued the impeachment of a former president was unconstitutional. Yet all but five of the Senate GOP caucus backed Paul’s measure, a signal that most Republicans are opposed to convicting Trump.

The makeup of Trump’s defense team is another lingering question as the Senate lays the groundwork for the trial. During his first Senate trial, he was represented by then-White House Counsel Pat Cipollone, his deputies, and a large team of outside legal advisers and allies, including the attorney Jay Sekulow.

Last week, Trump hired Butch Bowers, a South Carolina-based attorney, to defend him before the Senate. The former president has not made other announcements about his plans for the trial.