What we learned from Mueller’s testimony

But Mueller was clear on one point: he did not exonerate President Donald Trump on the question of obstruction of justice, and reminded the American public that Russia interfered in the 2016 election thinking it would benefit from a Trump win.

Republicans in Washington claimed victory even before the hearings finished, arguing House Democrats wasted a high-profile opportunity to build public support for launching impeachment proceedings against Trump. The president also celebrated Wednesday, calling the hearings a “devastating day for the Democrats.”

At a press conference after the hearings, House Speaker Nancy Pelosi said Mueller’s appearance represented a “crossing of a threshold in terms of the public’s awareness of what happened.” But Pelosi also signaled it was still too early to support impeachment without more public support and gathering more information on the investigation. “If we go down that path we should go in the strongest possible way,” she said.

For all the attention surrounding Mueller’s testimony, it’s unclear if his testimony will move the needle — either with the public or among House Democrats, who remain divided over how to proceed against Trump.

Mueller had difficulties in the spotlight

Wednesday marked the 89th time Mueller testified before Congress over the course of a long law enforcement career, which included a 12-year stint as FBI director from 2001 to 2013. But Mueller hadn’t testified in several years, and it showed in his appearance before the House Judiciary and Intelligence Committees.

Mueller seemed to struggle to hear lawmakers’ questions at times. There were moments when he could not recall key aspects of the probe into Russian interference in the 2016 election and ties to the Trump campaign.

Under questioning from Rep. Martha Roby, R-Ala., Mueller acknowledged he had personally attended “very few” of the roughly 500 interviews his team conducted in the course of the nearly two-year-long investigation. It was a striking admission that contributed to the perception Mueller did not have a firm grasp of the investigation.

Sticking to the report

In May, in his first public statement after the report was released, Mueller had signaled he would not provide new information to Congress if he was called to testify. He followed that strategy Wednesday, refusing to expand on the findings in his final, 448-page report on the investigation, which was released to the public by Attorney General William Barr in April.

In some cases Mueller declined to answer questions because he said they related to ongoing investigations. In other instances he cited classified information. Mueller also refused to answer any questions about the so-called Steele dossier, frustrating Republicans who claim the intelligence report was part of a politically motivated investigation into the Trump campaign by the FBI. They also suggested the dossier was part of Russia’s strategy to influence the 2016 election.

Mueller also made a point of declining to speculate on legal or political issues that fell outside of what he called at different times the “bailiwick” and “territory” of the special counsel investigation.

By sticking to the report, Mueller offered little new information Wednesday that wasn’t already publicly available ahead of the hearings.

Democrats use Mueller to counter Trump 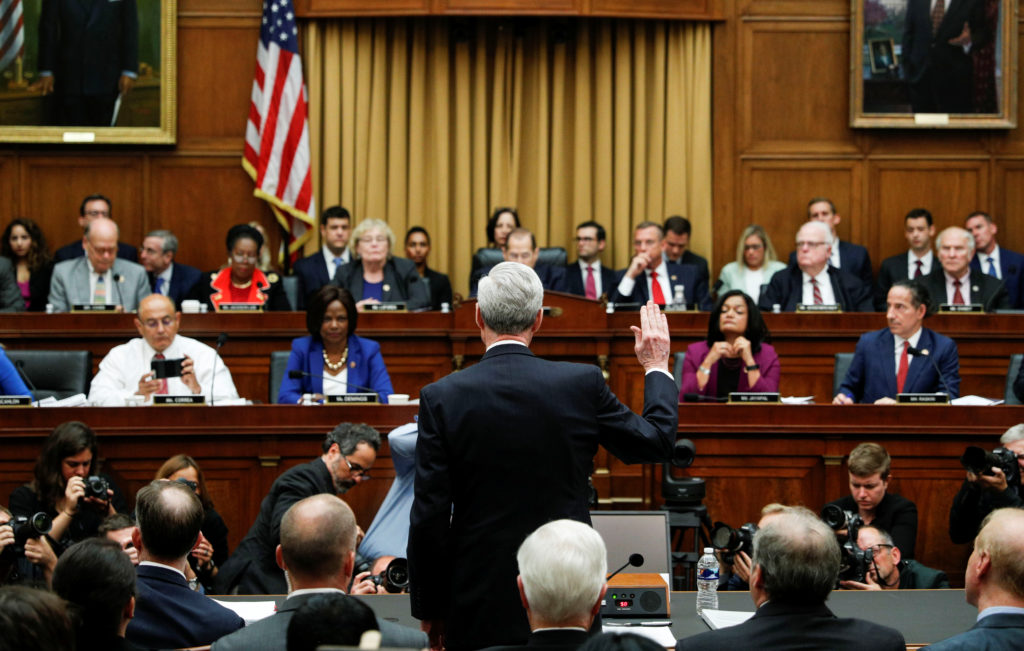 Robert Mueller is sworn in to testify before the House Judiciary Committee hearing on Capitol Hill on July 24, 2019. REUTERS/Tom Brenner

House Judiciary Committee Chairman Jerry Nadler, D-N.Y., set the tone for Democrats at the start of his committee’s hearing Wednesday by putting Mueller on record saying his report did not exonerate Trump on the question of obstruction of justice, contradicting the president’s claims.

“Did you actually totally exonerate the president?” Nadler asked. “No,” Mueller replied.

Other Democrats followed suit, asking Mueller to recount the evidence in his report that Trump attempted to interfere with his investigation on numerous occasions. They also walked Mueller through questioning that had him contradict several of the president’s refrains about the special counsel work, including definitive answers that the investigation was not a “witch hunt” or “a hoax.” The strategy appeared aimed at reframing Mueller’s conclusions for Americans who might tune into the hearings without having followed the investigation closely or read the full report.

Democrats also claimed Mueller’s evidence against Trump would have been enough to indict anyone other than a sitting president on obstruction of justice charges. But Mueller did not budge when Democrats pressed him on the issue. In his report, Mueller wrote that he did not make a determination about whether Trump obstructed justice because memos from the Department of Justice rule out indicting presidents while they’re in office. He repeated the position Wednesday. Mueller also declined to say whether he thought the president committed impeachable offenses.

Mueller’s refusal to engage in a discussion about impeachment left Democrats in the same position they were before the hearings began. So far, less than half of the 235-member House Democratic caucus supports impeachment. How many Democrats join the group pushing for impeachment in the coming days may hinge on the public’s reaction to Wednesday’s proceedings.

Republicans used the hearing to discredit the special counsel investigation as politically motivated, and claimed Mueller’s team was biased against Trump. They also slammed Democrats for continuing to focus on the investigation after it ended with Mueller concluding that the Trump campaign did not conspire with Russia.

In his prepared testimony, Mueller clarified that his probe “did not address ‘collusion,’ which is not a legal term. Rather, we focused on whether the evidence was sufficient to charge any member of the campaign with taking part in a criminal conspiracy. It was not.” 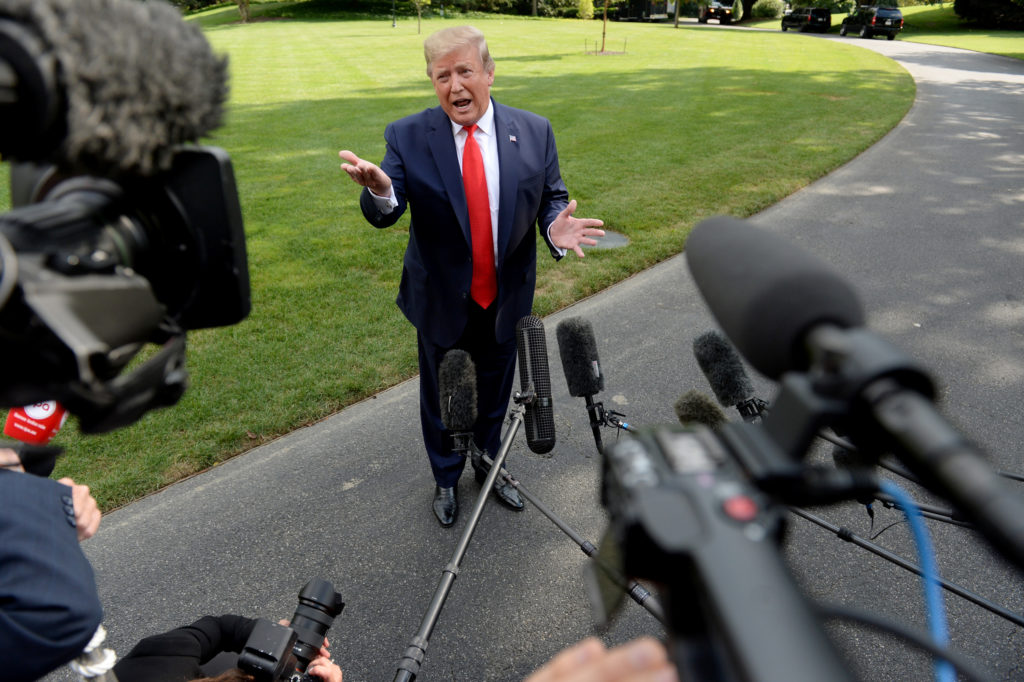 But that did not stop the top Republican on the Intelligence Committee, Rep. Devin Nunes, R-Calif., from using the term. He called Mueller’s appearance before Congress the Democrats’ “last gasp of the Russia collusion theory,” and said the hearing was a “Hail Mary attempt to convince the American people that collusion is real.”

Rep. Steven Chabot, R-Ohio, was even more blunt. “This hearing is their last, best hope to build up some sort of groundswell across America to impeach President Trump,” Chabot said of the Democrats on the Judiciary panel. “That’s what this hearing is really about.”

Trump also came out swinging after the hearing. “The Democrats lost so big today. Their party is in shambles right now,” Trump told reporters at the White House. He added that Mueller did a “horrible job” and repeated his attack on the investigation as a “hoax.”

The president’s comments signaled he’ll continue slamming the special counsel investigation, and renewing his false claim that it offered him total exoneration. His re-election campaign repeated that claim in a fundraising email to supporters Wednesday, saying the report found there was “no collusion, no obstruction, complete and total exoneration!”

The hearings, especially the first one, largely focused on Trump’s potential obstruction of justice. But Mueller used his appearance before Congress to highlight Russia’s unprecedented, and successful, campaign to interfere in the 2016 U.S. presidential election.

Mueller issued a chilling warning at the end of his testimony. Russia’s efforts to interfere in the 2016 election “wasn’t a single attempt,” Mueller said. “They’re doing it as we sit here,” he added, and Russia will likely try it again in 2020.