What you need to know before Paul Manafort’s trial

It was the summer of 2016, Paul Manafort was a campaign chairman, and his candidate, Donald Trump, was the newly crowned Republican presidential nominee.

Now, Paul Manafort is a defendant, and this time his team is made up of lawyers, not political operatives, fighting to keep him out of prison.

None of the cases stemming from Mueller’s probe have gone to a jury trial — until now.

Manafort is expected to appear Tuesday at the federal courthouse in Alexandria, Va., where federal prosecutors will begin presenting their case against him in the first trial to arise from Special Counsel Robert Mueller’s investigation.

It’s a significant milestone for the probe, which began exactly two years ago as an FBI counterintelligence inquiry into Russian interference in the 2016 presidential election. Investigators have since looked into possible links between the Trump campaign and Russia.

Five other defendants have entered guilty pleas, including three former Trump campaign aides who admitted to lying to investigators. But none of the cases stemming from Mueller’s probe have gone to a jury trial — until now.

Prosecutors accuse Manafort, 69, of working as an unregistered lobbyist for pro-Russian politicians in Ukraine, laundering more than $30 million in income and deceiving banks to secure millions of dollars more in loans.

In the Virginia trial, which begins Tuesday, Manafort faces charges of filing false tax returns; failing to report foreign financial accounts; and bank fraud and conspiracy. He faces related charges in the District of Columbia, in a case that is scheduled to go to trial in September. Manafort has pleaded not guilty in both cases. 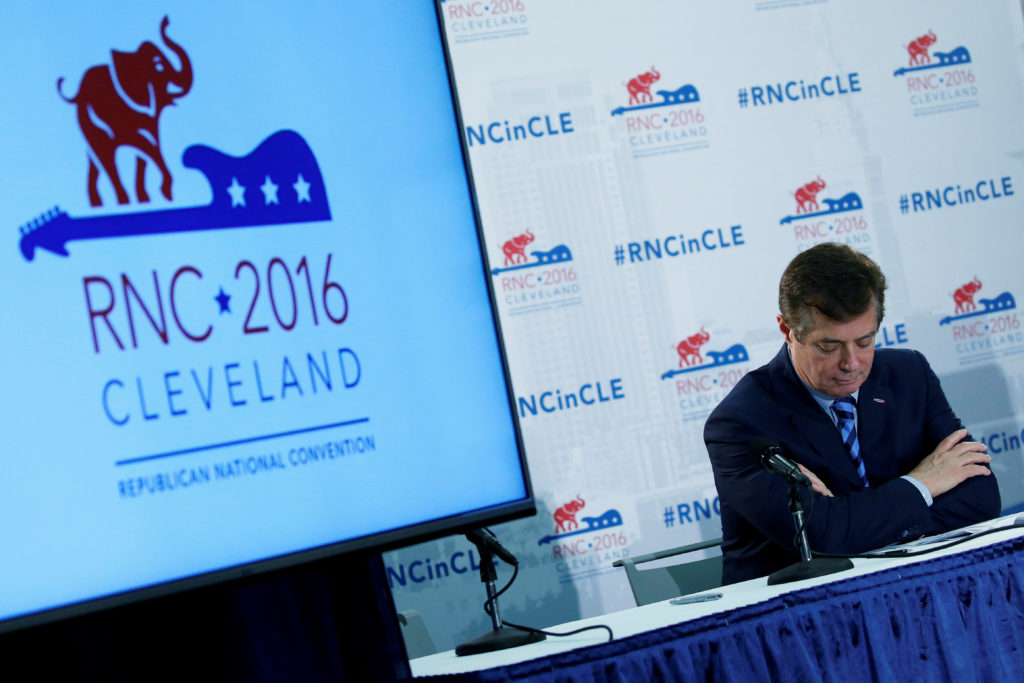 None of the charges have any explicit connection to Russia’s efforts to influence the 2016 election, and Manafort’s lawyers had previously sought to dismiss the indictments against him. They argued in one court filing that Mueller’s office overstepped its authority by producing indictments that focused on details having “no connection to coordination between the Russian government and the Trump campaign.”

But the judges presiding over the two cases ruled that they could proceed. Judge T.S. Ellis III of the United States District Court, presiding over the Virginia case, wrote in June that “it is plausible, indeed ultimately persuasive here, to argue that the investigation and prosecution has some relevance to the election which occurred months if not years after the alleged misconduct.”

Manafort was in charge of Trump’s campaign when the New York real estate developer accepted the party’s presidential nomination at the Republican National Convention in 2016. But Manafort left the campaign about a month later, after news reports of his political consulting work in Ukraine, and remained an outsider as Trump won the election and assembled an administration.

As president, Trump has downplayed Manafort’s role in the campaign. Trump told reporters last month that Manafort worked for him “for a very short period of time.” But in that same exchange, Trump came to Manafort’s defense and lashed out at Mueller’s investigation. “They’ve gone back 12 years to find things about somebody, and I don’t think it’s right,” Trump said.

The trial is not expected to reveal many new details about Manafort’s time as the chairman of the Trump campaign.

The trial is not expected to reveal many new details about Manafort’s time as the chairman of the Trump campaign, and prosecutors have said they are not planning to introduce any evidence suggesting coordination between the campaign and Russia’s influence operations.

But while the trial will focus on Manafort’s business dealings, it will bring attention to Mueller’s Russia probe, which Trump has repeatedly dismissed as a “witch hunt.” If Manafort is convicted, it could hurt Trump’s claims.

Prosecutors also noted that they intend to present evidence highlighting a financial executive’s interactions with Manafort. They claim that the executive, who was not identified by prosecutors in court documents, had approved Manafort’s allegedly fraudulent applications for $16 million in loans while also seeking Manafort’s help with securing roles on the Trump campaign and in the Trump administration.

Prosecutors have also listed Rick Gates, Manafort’s deputy on the Trump campaign and a longtime business associate, as one of the 35 potential witnesses they could call to testify during the trial. Gates, who worked alongside Manafort as a political consultant, was indicted along with Manafort in October 2017. But in February, Gates agreed to cooperate with Mueller’s investigation and pleaded guilty to charges of conspiracy and lying to investigators.

Manafort was initially ordered to remain under house arrest as he awaited trial, but U.S. District Court Judge Amy Berman Jackson, who is presiding over the case in the District of Columbia, sent him to jail in June after prosecutors flagged evidence that Manafort had been trying to influence the testimony of potential witnesses.

Soon after, Mueller’s office brought new charges against Manafort, adding counts of obstruction of justice and conspiracy to his case in the District of Columbia. Prosecutors also charged another one of his associates, Konstantin Kilimnik, with working with Manafort to try to tamper with the potential witnesses.

Manafort’s Virginia trial is expected to last around three weeks.