What’s being redacted from the Mueller report, and why

Attorney General William Barr told Congress last week that the Department of Justice and attorneys from the special counsel’s office were working together to redact four types of information from Robert Mueller’s full report before its release: grand jury information, classified information, information related to ongoing investigations, and information that would infringe on the privacy of “peripheral third parties.”

Barr said the four categories would be color-coded, so lawmakers and the public would better understand the redactions in the report. He also said some of the redactions would come with short explanations. But the redactions will likely still make parts of the report difficult to read. We may not know what the secret material is, but at least we’ll know why it wasn’t disclosed.

With that in mind, let’s break down each redaction category and what it means.

Mueller used a grand jury to interview more than 500 witnesses and issue more than 2,800 subpoenas and 500 search warrants throughout his 22-month-long investigation. The attorney general will redact these materials from the report Thursday morning.

Material collected through the grand jury process cannot be disclosed, according to Title III, Rule 6 of the Federal Rules of Criminal Procedure. The rules were put in place to protect the secrecy of federal investigations and people who may be under investigation but haven’t been charged with a crime.

READ MORE: What to look for in the Mueller report

But while Barr does not have the authority to disclose grand jury material on his own, it can be released by court order. If court-ordered, disclosure of grand-jury matter may be made to a government attorney, other government personnel, or another federal grand jury, if the information involves foreign intelligence or counterintelligence. Barr has indicated that he is not going to seek such a court order, but others could make the request, including congressional Democrats.

But attorneys said convincing the judge to release grand jury material is a long shot.

Barr does not have the authority to disclose grand jury material on his own, but it can be released by court order.

“Unless Attorney General William Barr walks arm-in-arm [to a judge] with Jerry Nadler, the chairman of the House Judiciary Committee, to say that there is a need for this material in connection with an impeachment proceeding, it’s not going to be released,” said Robert Ray, who succeeded Ken Starr as head of the independent counsel investigation into former President Bill Clinton in the late 1990s.

The D.C. Circuit Court of Appeals earlier this month ruled that with a few exceptions, including in response to an impeachment proceeding, federal judges cannot order grand jury material to be released. This decision could affect the disclosure of the grand jury material in the Mueller report; based on the ruling, Democrats would likely have to start the impeachment process before asking a judge to release grand jury information.

“Democrats in Congress would have to make a difficult choice in order to initiate formally an impeachment proceeding in order to get grand jury material,” said Jessica Roth, a former federal prosecutor for the Southern District of New York.

Barr said last week that he would work with the House and Senate Judiciary Committees to try to disclose grand jury materials if necessary. It’s unclear, however, if Barr and congressional leaders would wind up working together to disclose grand jury information, or if the process would spark a political and legal fight.

The report will also redact any classified information that, if publicly released, would disclose secret intelligence sources and methods, or, put someone’s life at risk.

Congress could see the sections of the report that fall into this classified information category, even if the public doesn’t. The Department of Justice could share it with a limited group of House and Senate leaders in a closed session, as often happens with classified intelligence information. 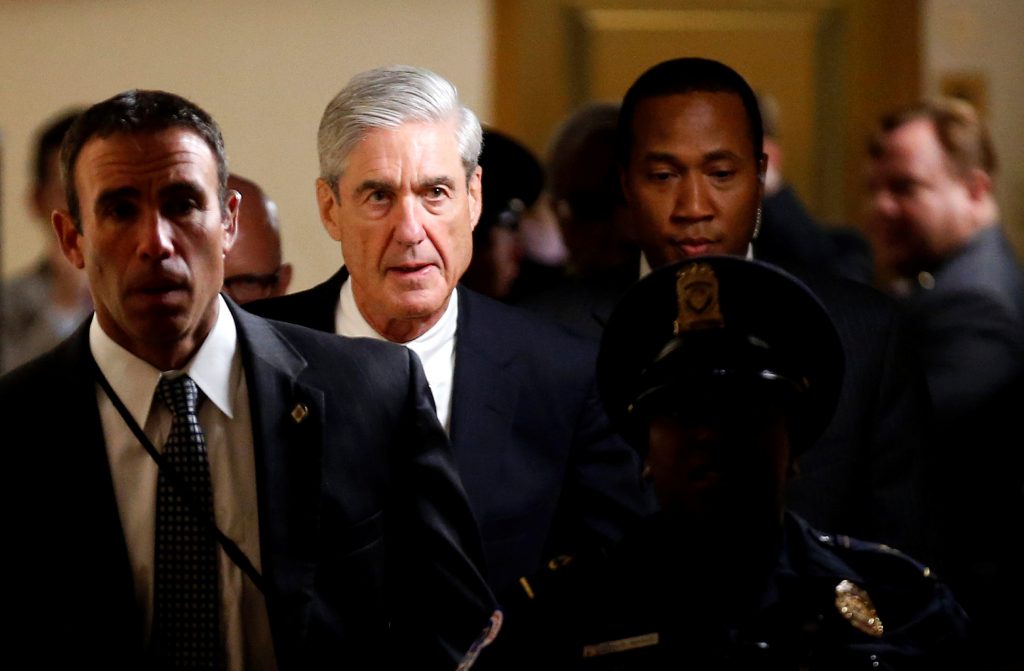 Special Counsel Robert Mueller, pictured departing Capitol Hill after briefing members of the U.S. Senate on his investigation into potential collusion between Russia and the Trump on June 21, 2017. REUTERS/Joshua Roberts

As Barr noted in his testimony last week: “The fact that information is classified doesn’t mean that Congress can’t see it.”

“I can envision a situation where under appropriate safeguards, that information would be shared,” Barr added. “I’m willing to work with the Judiciary Committee on that.”

Barr also said he would redact any information in the report that pertains to ongoing investigations stemming from the special counsel’s original probe.

Federal and state prosecutors across the country — from Los Angeles to Washington, D.C., and the Southern District of New York — are pursuing several inquiries and investigations that grew out of the Mueller probe. An example is the federal investigation into Michael Cohen, which Mueller referred to the prosecutors in New York. The exact number and the focus of these investigations is unknown.

“You will recognize that special counsel Mueller did spin off a number of cases which continue in progress and are being handled in the department. And so, we have to make sure nothing in the report impinges on those ongoing cases,” Barr told Congress.

Federal and state prosecutors across the country are pursuing several inquiries and investigations that grew out of the Mueller probe.

Those redactions are likely only “temporary,” Ray said, because the information could be disclosed once the other investigations close.

Information that would infringe on the privacy of individuals

The report will also have redacted any information that could be damning to “peripheral third parties,” as Barr put it. This follows a long-standing Justice Department precedent to not release damaging information about uncharged individuals because they cannot defend themselves in court. (This category overlaps with protected grand jury material and information connected to other cases, both of which follow the same Justice Department guideline.)

“The Department of Justice speaks through indictment. If it decides not to charge something, it says nothing,” Ray said.

The most recent high-profile violation of this rule came in 2016, when former FBI Director James Comey wrote a letter to Congress about the bureau’s investigation into Hillary Clinton’s email use, though no charges had been brought against her.

How the term “peripheral” will be applied to individuals mentioned in the report is unclear. Roth, the former federal prosecutor, said the president would likely not be considered “peripheral” to the investigation.

Barr appeared to take that view at his recent congressional hearing. When asked if he would redact information to protect the reputational interests of the president, Barr responded: “No. I’m talking about people in private life, not public office holders.”

Ray, the former independent counsel, said the general rule to redact information on non-indicted persons typically does not apply to the president, for two reasons: The president has the ability to defend himself publicly, and there is an overriding public interest to evaluate the president’s conduct.

“I would imagine if the report arrives at Congress’ door with no mention of the president on the grounds that he is peripheral, [lawmakers] will push back tremendously,” Roth said.