Where William Barr stands on the issues, then and now

It’s been nearly three decades since the last time William Barr appeared before the Senate Judiciary Committee as the nominee for attorney general. Since then, much has changed about the department and the issues it faces — including working for a president who has repeatedly attacked the agency and the person Barr hopes to replace, former Attorney General Jeff Sessions.

At his Senate confirmation hearing Tuesday, Barr had a chance to defend his past positions as attorney general, and address how he would run the department under President Donald Trump. Here is a comparison between statements Barr has said in the past, and statements he made Tuesday before the Senate Judiciary Committee.

Then: Barr is known for having an expansive view of presidential power. He touched on that position again in a June 2018 memo sent to Deputy Attorney General Rod Rosenstein and other law enforcement officials about special counsel Robert Mueller’s Russia investigation. Barr wrote: “The Constitution itself places no limit on the President’s authority to act on matters which concern him or his own conduct. On the contrary, the Constitution’s grant of law enforcement power to the President is plenary. Constitutionally, it is wrong to conceive of the President as simply the highest officer within the Executive branch hierarchy. He alone is the Executive branch.”

Now: The issue came up repeatedly at Barr’s Senate confirmation hearing Tuesday. Barr defended the memo — which he said he wrote without help from others — but also drew a more nuanced stance. Barr noted that nobody should be above the law and that the justice system shouldn’t be influenced by politics. “We live in a time when the country is deeply divided, and in the current environment the American people have to know that there are places in the government where the rule of law, not politics, holds sway,” Barr said.

Then: Barr’s views on abortion stirred controversy at his 1991 confirmation hearing. “I do not believe the right to privacy extends to abortion, so I think that my views are consistent with the views that have been taken by the department since 1983, which is that Roe v. Wade was wrongly decided and should be overruled,” Barr said at the time. Since then, he has said he believes Roe v. Wade would be overturned.

Now: Barr said Tuesday that as attorney general he would uphold abortion laws. “I think the justices, the recent ones, have made it clear that they consider Roe v. Wade an established precedent and it’s been on the books 46 years,” Barr said.

Then: Barr has taken a hardline approach to immigration since his early days in the Justice Department. “The real tragedy is because of accidents of geography, we have people who are not willing to stand in line under the fair system but come crashing in the back door. We have laws on the books, and they have to be enforced,” Barr said in archived recording from 1994.

More recently, in a February, 2017 Op-Ed in the Washington Post, Barr defended the Trump administration’s controversial travel ban for people from seven majority Muslim countries. In the Op-Ed, Barr argued that Trump had “constitutional authority” to impose the ban.

“It is clear that the criterion for selecting those seven countries was not that they were Muslim but that the risk of terrorist infiltration from these countries is especially high,” Barr wrote.

Now: Barr supported much of the Trump administration’s immigration agenda at the Senate hearing Tuesday, arguing for stronger enforcement and that asylum claims should be limited.

“I think one of the major problems is that the immigration laws just have to be changed to provided sensical and commonsense ways to process immigration and claims of asylum,” Barr said. 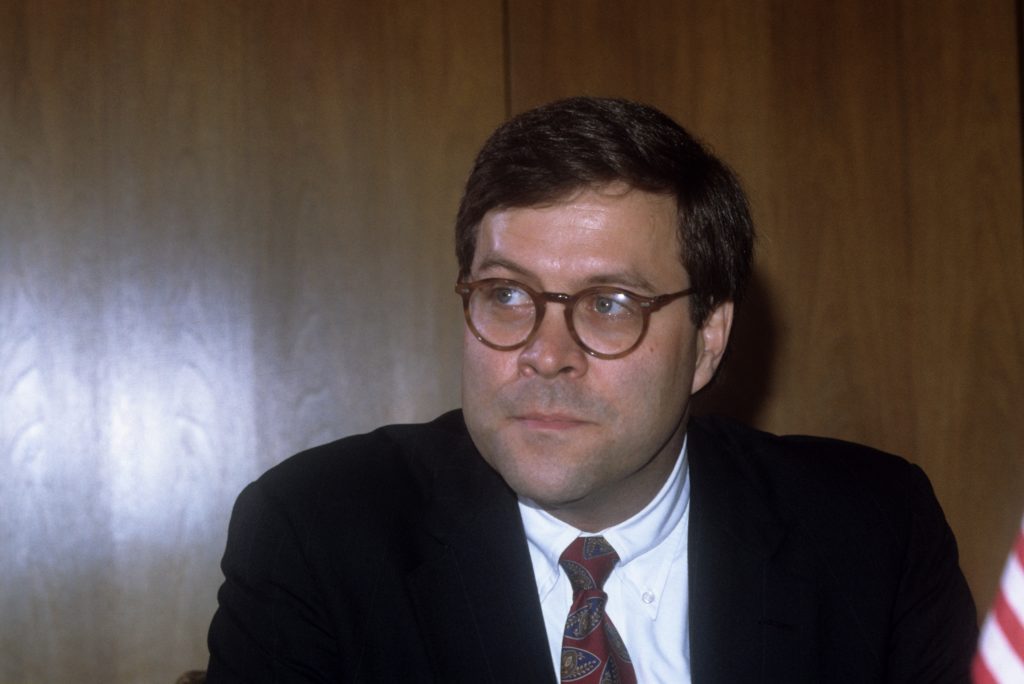 In a 1992 interview, William Barr criticized the idea of building a barrier on the U.S.-Mexico border. File photo by Gisbert Paech/Getty Images

Barr also said that “people are abusing the asylum system” and that drugs trafficking at the border was a problem.

Additionally, Barr said he opposes sanctuary cities and views them as one of the “factors that attracts people to come illegally into the country.” Under Trump, the Justice Department has sought to force cities to abandon the policy, though the efforts have stalled in the courts.

Then: In a 1992 interview with The MacNeil/Lehrer NewsHour on PBS, Barr said a wall on the U.S.-Mexico border would be “unnecessary” and “overkill.”

“The problem of illegal immigration across the border is really confined to metropolitan areas. Illegal migrants do not cross in the middle of the desert and walk hundreds of miles to the nearest city,” Barr said in the interview. “They generally try to go up through certain specified routes.”

Now: Barr said he supports building a physical barrier on the border as a way of controlling the flow of drugs from Mexico into the U.S. “We need money right now for border security, including barriers and walls and slats and other things,” Barr said, adding, “anything that makes sense in different areas of the border.”

Then: As attorney general in 1992, Barr wrote a report called “The Case for More Incarceration,” in which he argued that the U.S. was not incarcerating enough criminals. The report highlighted Barr’s tough-on-crime approach and helped establish his reputation as a “law and order” attorney general.

Now: Barr told senators he was committed enforcing the First Step Act, a criminal justice reform package that Trump signed into law in December. Barr said he recognized that his stance on sentencing was stronger in the past, but said his position at the time was warranted because the crime rates were higher in the early 1990s.

“I have no problem with reforming the sentencing structure and I will faithfully enforce that law,” Barr said.

He also justified his support for strong penalties on drug crimes specifically. “From my perspective, the very Draconian penalties on crack were put into place initially because when the crack epidemic hit it was like nuclear weapons going off in the inner city,” he said.

Then: In his June 2018 his memo, Barr argued that Mueller did not appear to have a case for obstruction of justice against Trump and that Mueller should not be able to interrogate the president until he has sufficient evidence of collusion. The memo drew fresh attention after Barr’s nomination for attorney general and was raised repeatedly by Democrats at the hearing Tuesday.

Now: Barr said if confirmed he would not fire Mueller without good cause, and would share as much of Mueller’s final report with Congress and the public as possible within the regulations for the special counsel investigation.