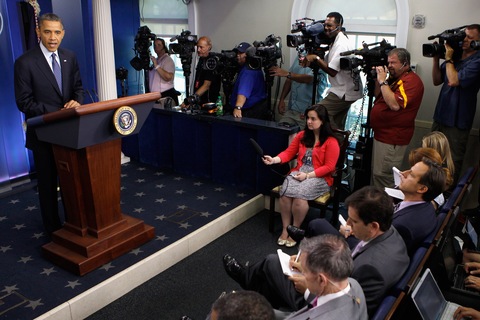 Is it bad for democracy when a president answers impromptu questions from the press 107 times after a photo opportunity, compared with his predecessor’s 355? Or that he’s more likely to dish with the ladies of “The View” than he is to sit down with the New York Times?

These are the questions reporters are raising about President Obama’s White House as he enters a second term having ruffled feathers in the Fourth Estate. It’s a question of reporter access, but also of media control. It’s a story that gets Washington in a lather, but also gets at the way an administration conducts itself.

Politico’s Mike Allen and Jim Vandehei write in a four-page behind-the-curtain piece Tuesday that “the balance of power between the White House and press has tipped unmistakably toward the government.”

They quote a number of White House reporters, including the Times’ Peter Baker and CBS News’ Mark Knoller, who are critical of their lack of access to Mr. Obama and are amazed at the amount of content produced by the administration’s media specialists.

(For the record, the NewsHour has not had an interview with Mr. Obama since 2009. You can watch that here.)

The few responses in the story from a White House communications employee speak to how the administration views itself as a media organization, one that’s almost in competition with the collective Fourth Estate.

The White House likes to point out that more “real people” are able to reach out to Mr. Obama, who has answered questions in IAmA chats on Reddit and joined Vice President Biden in Google Hangouts, where people actually ask followup questions.

We noted Monday what began this latest outcry: a golf outing between Mr. Obama and Tiger Woods. And sure, this easily sounds like whining from an industry about as popular as Congress. But some reporters argue that for an administration that talks about its historic transparency, shallow efforts to allow more technological access to voters do not equal an openness with the Fourth Estate.

Dylan Byers, also of Politico, had his own story Monday about Mr. Obama’s golf trip and the White House Press Corps. He quoted Ed Henry, White House Correspondents Association president, calling for transparency after the press corps felt “extreme frustration” for not having access to the exclusive Florida golf club where the president played with Woods. Byers reports that on the ride home, Mr. Obama shared a 10-minute, off-the-record conversation with pool reporters on Air Force One.

The print pooler, Scott Wilson of the Washington Post, described it as a choice between no access versus some discussion with Mr. Obama that’s not reportable. Wilson called the situation “not ideal at all.”

What the administration would rather discuss Tuesday is Mr. Obama’s pressure on Congress on the issue of the automatic budget cuts set to go into effect March 1.

Mr. Obama will speak Tuesday morning flanked by firefighters and other emergency responders who the White House says could lose their jobs if the sequester is not avoided. An administration official emailed reporters that the event will showcase “the kinds of working Americans whose jobs are on the line if Congressional Republicans fail to compromise on a balanced solution.”

The official previewed the remarks:

With less than two weeks before these cuts hit, the President will challenge Republicans to make a very simple choice: do they protect investments in education, health care and national defense or do they continue to prioritize and protect tax loopholes that benefit the very few at the expense of middle and working class Americans?

The President has already taken steps to reduce the deficit by more than $2.5 trillion and he wants to do more. He has on the table a plan that will further reduce the deficit in a balanced way and achieve the kinds of savings we need to get is on a fiscally sustainable path while making the investments we need in education, manufacturing and research and development that will grow and strengthen the middle class.

The early look suggests that Mr. Obama will lay the blame squarely on Republicans who control just one chamber of the divided Congress. Mr. Obama will mention that “Congressional Democrats have proposed a smaller package to delay these cuts from taking effect.” That plan is a mix of ending subsidies for oil companies and other businesses, along with a tax hike for millionaires and ending tax breaks for companies that ship jobs overseas — all efforts the GOP opposes.

“The President will urge Congressional Republicans to compromise and accept this solution so these devastating cuts that will hurt our economy and middle class families won’t hit,” the official said.

As Molly Hooper reports for The Hill, some rank-and-file Republicans say “they’re not worried their leverage could be cut once the spending cuts are triggered, though they acknowledge Obama is a tough political adversary.”

She writes that these Republicans see the sequester as a way to force spending cuts, and that they “are also getting ready to battle by reminding voters it was the White House that conceived of the sequester — the $1.2 trillion in deficit-reductions, including lower interest payments, that were included as part of the deal in 2011 to raise the debt ceiling.”

Congress returns to Washington on Monday.

On Monday, PBS began a weeklong series exploring every facet of the gun debate in the wake of the tragic shooting massacre in Newtown, Conn. The series features looks at signature programs, starting with Monday’s NewsHour, as we examined how the political debate and effort to affect change has spread to the states.

Gwen Ifill led the show with a piece about how state and local pension funds are divesting their stake in gun manufacturers. She also reported on the killing of a sister of a girl who was on stage Friday with Mr. Obama.

Gwen then talked with Christina about local lawmakers from Arkansas to New York who are taking matters into their own hands. Christina noted that CQ Roll Call’s StateTrack found that 2,319 bills related to guns have been filed so far this year. They also talked about efforts by New York City Mayor Michael Bloomberg’s gun control political action committee to influence a special House election in Chicago.

Watch the discussion here or below:

Colorado Public Radio’s Megan Verlee took a look at how Colorado is dealing with the aftermath of the shootings at Columbine High School and the movie theater in Aurora. She reported on how those affected by gun violence are pushing for legislative reform at the state level and tougher enforcement of existing laws. Colorado’s Democratic-controlled state House passed four gun control bills Monday, including universal background checks and limiting magazines to 15 rounds.

Watch Verlee’s report here or below:

Hari Sreenivasan talked with students in a Google Hangout to see how they view the debate. Is it a question of arming teachers or banning video games? Participants were from Richwood High School in W.Va.; Desert Pines High School in Las Vegas; Daniel Pearl Magnet School in Los Angeles; Sentinel High School in Missoula, Mont.’ Magnolia High School in Magnolia, Texas; and Pearl-Cohn Entertainment Magnet High School in Nashville, Tenn.

On Tuesday, Jeffrey Brown will look at violent video games. The project includes robust online offerings that you can check out here. Find all the details about which pieces are airing and when here.

Protester at Playbook breakfast. Can’t tell what he wants though. “Pay your fair tax share!” Being escorted out now.

In IL-2, wonder if Debbie Halvorson would be cryingfoul if Toi Hutchinson had gotten out and backed HER? Very doubtful!

Just got off the phone with my good friend John Warner and wished him a happy 86th birthday and many more.