The Senate’s top Democrat dismissed President Donald Trump’s immigration proposal as a “wish list” for hard-liners on Friday as the plan drew harsh reviews from Democrats and some conservatives.

Minority Leader Chuck Schumer, D-N.Y., expressed satisfaction that Trump had provided some clarity to his immigration goals, which have befuddled members of both parties and hindered progress in Congress. The White House plan unveiled Thursday offers a pathway to citizenship for 1.8 million young immigrants living in the U.S. illegally in exchange for new restrictions on legal immigration and $25 billion in border security.

The proposal was labeled “Trump Amnesty Disaster” in an email distributed by conservative figure Richard Viguerie.

Schumer expressed relief that Trump “finally acknowledged that the Dreamers should be allowed to stay here and become citizens,” a reference to those young immigrants. But he said Trump’s plan “flies in the face of what most Americans believe” and called the proposal “the wish list that anti-immigration hardliners have advocated for for years.”

The White House proposal was labeled “Trump Amnesty Disaster” in an email distributed by conservative figure Richard Viguerie, who wrote that the numbers of immigrants it would allow in the U.S. “will make Republicans a permanent minority party.” Trump-aligned candidates from Nevada and Virginia rejected the notion outright. A loyal media ally, Breitbart News, attacked him as “Amnesty Don.” And outside groups that cheered the hard-line rhetoric that dominated Trump’s campaign warned of fierce backlash against the president’s party in November’s midterm elections.

Senior White House officials cast the plan as a centrist compromise that could win support from both parties and enough votes to pass the Senate. But it comes with a long list of concessions that many Democrats, and also conservative Republicans, especially in the House, may find impossible to swallow.

The plan would provide a pathway to citizenship for the roughly 690,000 younger immigrants protected from deportation by the Obama-era Deferred Action for Childhood Arrivals program — as well as hundreds of thousands of others who independent estimates say qualify for the program, but never applied.

Trump announced last year that he was doing away with the program, but he gave Congress until March to come up with a legislative fix.

The plan would not allow parents of those immigrants to seek lawful status, the officials said.

In exchange, Trump’s plan would dramatically overhaul the legal immigration system. Immigrants would only be allowed to sponsor their spouses and underage children to join them in the U.S., and not their parents, adult children or siblings. The officials said it would only end new applications for visas, allowing those already in the pipeline to be processed. Still, immigration activists said the move could cut legal immigration in half.

It would also end a visa lottery aimed at diversity, which drew Trump’s attention after the New York City truck attack last year, redirecting the allotment to bringing down the existing backlog in visa applications.

Under the plan, recipients could have their legal status revoked due to criminal behavior or national security threats, the officials said, and eventual citizenship would require still-unspecified work and education requirements — and a finding that the immigrants are of “good moral character.” 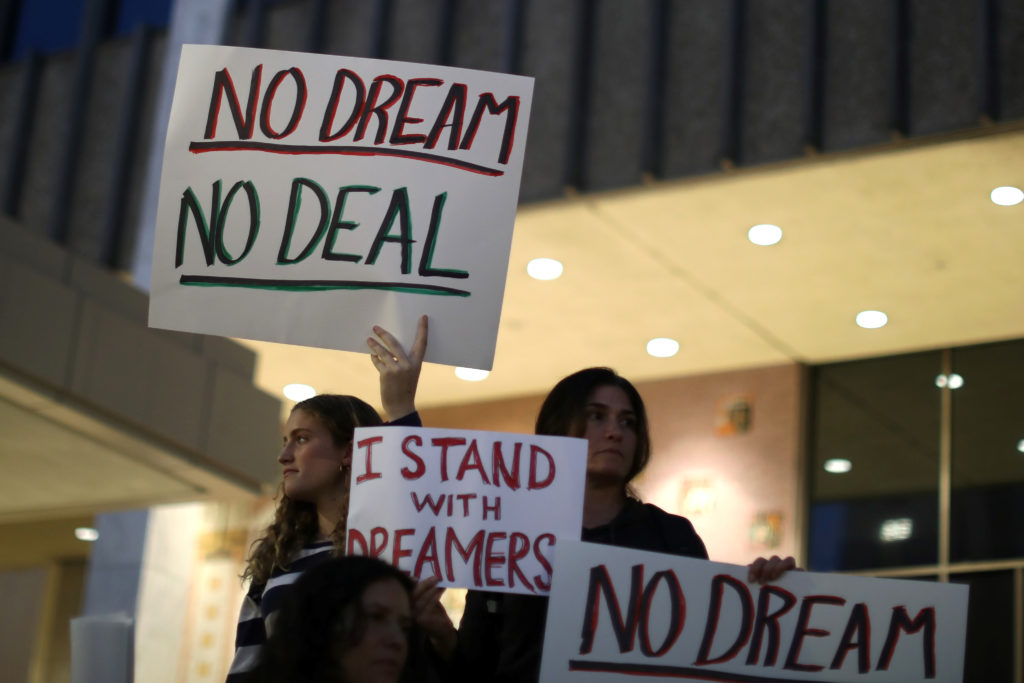 The nonpartisan Migration Policy Institute said it believes the largest share of the White House’s 1.8 million people who’d be eligible for citizenship — 1.3 million — are people who currently meet all of DACA’s eligibility requirements. These include years in the U.S., their ages now and when they entered this country, and whether they have a high school or equivalent education.

Another 400,000 are people who’d be eligible for DACA protection but for their education. And 100,000 more are people who are under age 15 —the minimum age allowed for most people requesting protection under the program.

Trump earlier this month had deferred to a bipartisan group of lawmakers in the House and Senate to craft an immigration proposal, saying he would sign whatever they passed. But as talks on Capitol Hill broke down — in part because of controversy Trump ginned up using vulgar language to describe African countries — the White House decided to offer its own framework.

Senate Majority Leader Mitch McConnell and others had also complained the president had failed to sufficiently lay out his priorities, leaving them guessing about what he might be willing to sign. One official said the Thursday release represents a plan for the Senate, with the administration expecting a different bill to pass the House.

McConnell thanked the president and his aides for providing the outline. “I am hopeful that as discussions continue in the Senate on the subject of immigration, Members on both sides of the aisle will look to this framework for guidance as they work towards an agreement,” he said in a statement.

Some of Congress’ more conservative members seemed unwilling to open the citizenship door for the Dreamers.

But some of Congress’ more conservative members seemed unwilling to open the citizenship door for the Dreamers.

“DACA itself didn’t have a pathway to citizenship,” said Sen. Ted Cruz, R-Texas, who battled Trump in 2016 for the GOP presidential nomination. “So I think it would be a profound mistake and not consistent with the promises we made to the voters to enact a pathway to citizenship to DACA recipients or to others who are here illegally.”

Trump tweeted Friday on his flight home from the World Economic Forum in Davos, Switzerland, that negotiations have “been made increasingly difficult by the fact that Cryin’ Chuck Schumer took such a beating over the shutdown that he is unable to act on immigration!”

Senate Democrats prompted a 69-hour government shutdown after they refused to support a funding bill without support for Dreamers. They eventually relented.