In a written statement, the White House labeled the proposal “dangerous policy that will harm the nation.” It singled out a provision that directs the government to prioritize enforcement efforts against immigrants who arrive illegally beginning in July.

Senate leaders were hoping to hold votes Thursday on Trump’s immigration proposal, along with the bipartisan compromise and two other measures. In an ominous sign, the leaders opened the day’s debate by trading blame, as prospects seemed to grow that the chamber’s long-awaited debate on the hot-button issue would end in stalemate.

Senate Majority Leader Mitch McConnell, R-Ky., assailed Democrats for failing to offer “a single proposal that gives us a realistic chance to make law.” Instead, he said, Democrats should back Trump’s “extremely generous” proposal.

Trump would offer 1.8 million Dreamers a 10- to 12-year process for gaining citizenship, provide $25 billion to build his coveted U.S.-Mexico border wall and restrict legal immigration. Dreamers are immigrants brought to the U.S. illegally as children who risk deportation because they lack permanent authorization to stay in the U.S.

Instead, Democratic leaders rallied behind a bipartisan plan that would also give 1.8 million Dreamers a chance for citizenship. But while it would provide the $25 billion Trump wants for his wall, it would dole it out over 10 years and lacks most of the limits Trump is seeking on legal immigration.

Senate Minority Leader Chuck Schumer, D-N.Y., said Trump has “stood in the way of every single proposal that has had a chance of becoming law.” He added, “The American people will blame President Trump and no one else for the failure to protect Dreamers.” 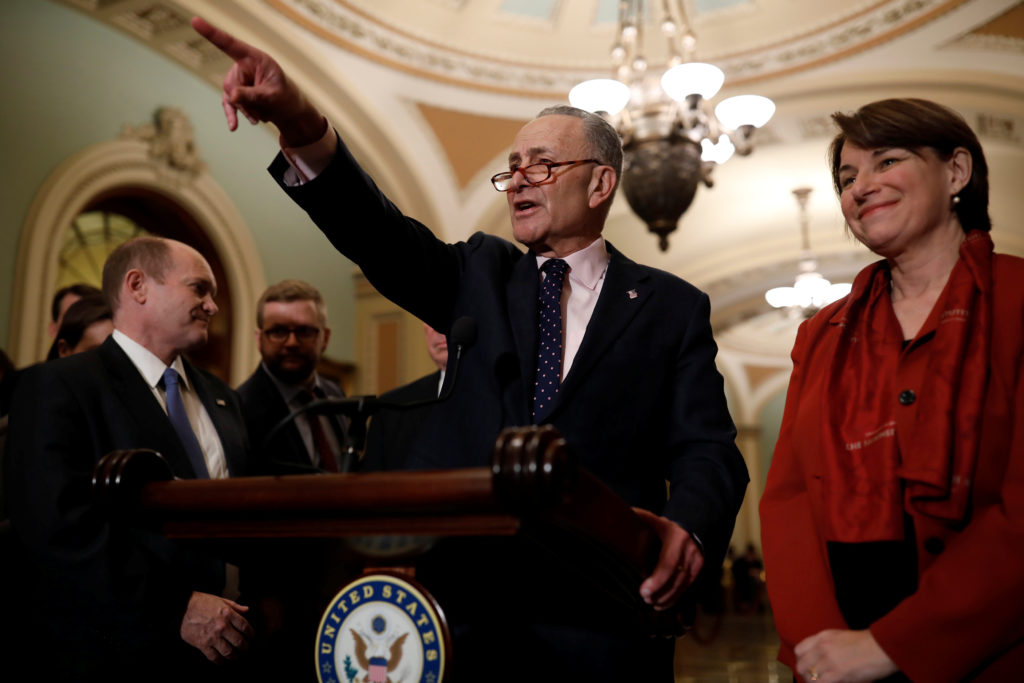 Overnight, the Department of Homeland Security said in an emailed statement that the bipartisan proposal would be “the end of immigration enforcement in America.”

That drew fire from Sen. Lindsey Graham, R-S.C., one of eight GOP co-sponsors of the bipartisan plan. “Instead of offering thoughts and advice — or even constructive criticism — they are acting more like a political organization intent on poisoning the well,” Graham said in a statement.

The bipartisan compromise was announced Wednesday by 16 senators with centrist views on the issue and was winning support from many Democrats, but it faced an uncertain fate.

Besides opposition by the administration and leading Republicans, the bipartisan plan prompted qualms among Democrats. The party’s No. 2 Senate leader, Dick Durbin of Illinois, said some Democrats had “serious issues” with parts of the plan. Those concerns focused on its spending for Trump’s wall and its prohibition against Dreamers sponsoring their parents for legal residency.

So far, neither Trump’s plan or the bipartisan measure seemed to have support from 60 senators, the number that will be needed to prevail. Republicans control the chamber 51-49, though Sen. John McCain, R-Ariz., has missed the last several weeks while battling cancer.

The bipartisan measure’s sponsors included eight GOP senators. That meant just three more Republicans would be needed for it to prevail if it is backed by all 47 Democrats and the two independents who usually support them.

The centrist proposal was produced by a group led by Sens. Susan Collins, R-Maine, and Joe Manchin, D-W.Va., that spent weeks seeking middle ground. Besides its path to citizenship and border security money, it would bar Dreamers from sponsoring their parents for citizenship, far narrower than Trump’s proposal to prevent all legal immigrants from bringing parents and siblings to the U.S.

The moderates’ measure does not alter a lottery that distributes about 55,000 visas annually to people from diverse countries. Trump has proposed ending it and redistributing its visas to other immigrants, including some who are admitted based on job skills, not family ties.

Also in play is a more modest plan by McCain and Sen. Chris Coons, D-Del. It would let many Dreamers qualify for permanent residency and direct federal agencies to more effectively control the border by 2020. But it doesn’t offer a special citizenship pathway for Dreamers, raise border security funds or make sweeping changes in legal immigration rules.

The White House said it opposes the McCain-Coons plan, saying it would “increase illegal immigration” and cause other problems.

Another vote would be taken on a proposal by Sen. Pat Toomey, R-Pa., that would add language blocking federal grants to “sanctuary cities,” communities that don’t cooperate with federal efforts to enforce immigration laws. The amendment is considered sure to lose.