DES MOINES, Iowa — The urgent fight for the Democratic presidential nomination raged across Iowa on Sunday as the party’s leading candidates scrambled to deliver closing arguments centered on the defining question of the 2020 primary: Who can beat President Donald Trump?

Former Vice President Joe Biden demonstrated the breadth of his appeal by appearing at separate events with Catholics, union members and African Americans. He told black voters with a smile that “I’ve gone to more black churches than you have, probably, because I’m older.”

At the same time, the fight for the heart of the progressive movement pitted Elizabeth Warren against Bernie Sanders with dueling rallies 200 miles apart as they raced to reach voters before being forced back to Washington when Trump’s impeachment trial resumed Monday. With Iowa’s first-in-the-nation caucuses just eight days away, it was unclear when the senators would be able to return to the state.

“We gotta win,” Warren told several hundred people in Davenport, on the eastern edge of the state. “And also, can we just address it right here? Women win. The world changed when Donald Trump got elected.”

Sanders and a collection of high-profile surrogates made an equally aggressive case in the rural community of Perry in central Iowa, having spent much of the weekend highlighting his ability to energize what Sanders has often called “a multi-generational, multi-racial, working-class coalition.”

“The reason we are going to win here in Iowa is we have the strongest grassroots movement of any campaign,” Sanders said.

The candidates were running out of time to change the direction of the high-stakes nomination fight ahead of Iowa’s Feb. 3 caucuses, the first of four primary contests in February in which momentum is critical. Establishment-minded Democrats were increasingly concerned about Sanders’ strength, fearing that the 78-year-old self-described democratic socialist might be too radical to beat Trump this fall should he win the nomination. 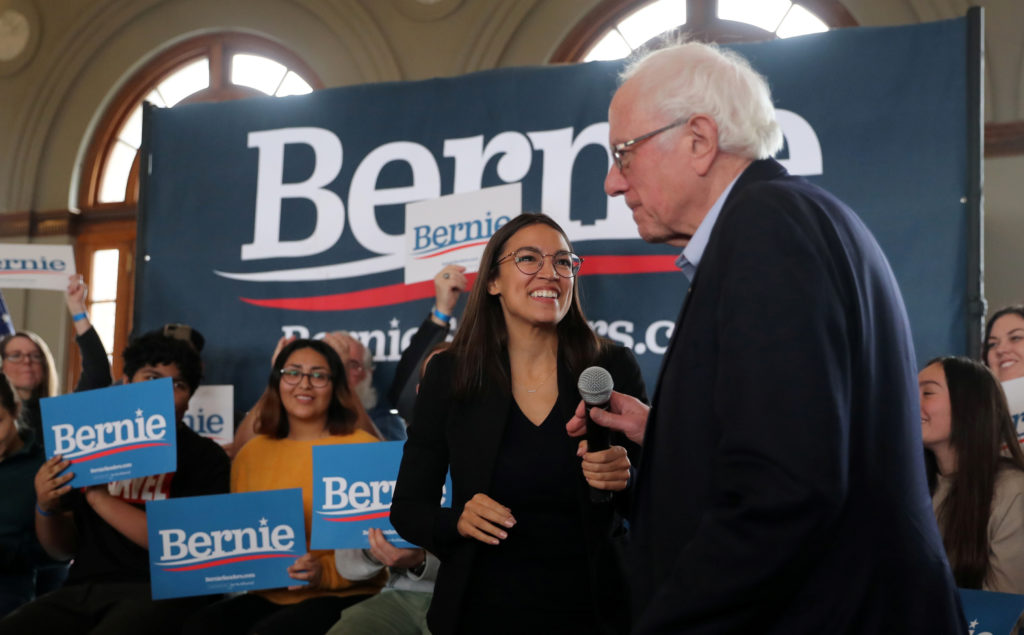 Stoking those fears, Trump’s campaign teased a general election attack against Sanders. The Vermont senator had spent much of the day before campaigning alongside New York Rep. Alexandria Ocasio-Cortez, and the president’s team sent out an email with the title “Socialist invasion.”

“Why is radical socialist Alexandria Ocasio-Cortez spending so much time campaigning for Bernie? Because he’s the godfather of her extreme agenda and socialist vision for America,” the email said.

The day before, a new Biden backer, U.S. Rep. Cindy Axne, D-Iowa, shared what many elected Democrats say in private when asked whether party leaders are growing nervous about Sanders’ rise: “Oh, my goodness, I should really hope so.”

The youngest candidate in the race, 38-year-old Pete Buttigieg, also played up warnings about Sanders — at least in his fundraising emails. For a second consecutive day, Buttigieg’s campaign sent a message to supporters warning that the Vermont senator might become the nominee.

Buttigieg, the former mayor of South Bend, Indiana, insisted that “it is time for something new” as he courted more than 1,000 people at an elementary school in West Des Moines.

“We cannot run the risk of trying to defeat this president with the same Washington political warfare mentality that brought us to this point,” he said, declining to single out any of his rivals. “It is time for something different. It is time to turn the page.”

As a deep sense of uncertainty loomed over the Iowa contest, Trump’s impeachment trial remained a major complication. Four candidates will be compelled by the Constitution to sit as jurors in Trump’s Senate impeachment trial. The proceedings make it virtually impossible for the senators — Sanders, Elizabeth Warren of Massachusetts, Amy Klobuchar of Minnesota and Michael Bennet of Colorado — to appear in Iowa during the week, although there is some sense that the trial could be over by week’s end.

As Iowa drew the most focus, billionaire candidate Tom Steyer reminded union workers in Nevada, which hosts the third contest on the primary calendar, that he hasn’t forgotten about them. 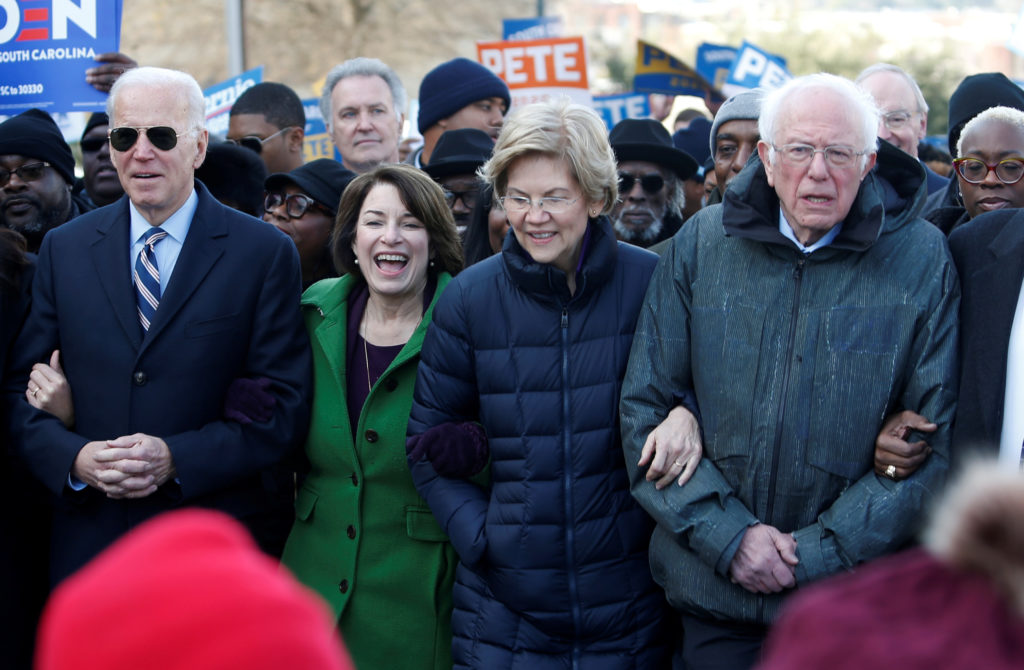 “I’m know that I’m the only person who showed up here,” Steyer told reporters at a union conference in Las Vegas. “I try to show up and show that I care.”

Back in Iowa, Warren tried to maintain some momentum after picking up a coveted endorsement from The Des Moines Register. The newspaper called her “the best leader for these times” and said she “is not the radical some perceive her to be” even if “some of her ideas for ‘big, structural change’ go too far.”

Warren leaned into her gender as she courted several hundred voters at an elementary school gymnasium in Davenport.

“We took back the House and we took back statehouses around the nation because of women candidates and the women who get out there and do the hard work,” she said.

Biden scored the endorsement of the Sioux City Journal, which called him “the candidate best positioned to give Americans a competitive head-to-head matchup with President Trump” and said he would be best at attracting support from “independents and disgruntled Republicans.”

The former vice president’s itinerary reflected his ability to assemble just that kind of coalition. A devout Catholic, Biden attended Mass in Des Moines in the morning, spoke at a union hall and then faced a gathering of the NAACP and other minority advocacy groups.

“I was raised in the black church politically. Not a joke,” Biden told a man who asked about his engagement with the faith-based minority community.

“That’s where my political identity comes from,” he said of the black community.