President Donald Trump’s Supreme Court pick, Amy Coney Barrett, is a favorite among conservatives, a former clerk of the late Justice Antonin Scalia who like her mentor is considered to be a constitutional originalist who interprets the law based on what she believes to be the original intent of the framers. But her past legal writings around issues like abortion and health care are prompting backlash from Democrats who oppose Republicans’ push to fill the late Justice Ruth Bader Ginsburg’s seat before the election.

Trump appointed Barrett to her current seat on the 7th U.S. Circuit Court of Appeals in Chicago in 2017. The two met in person in 2018 when he was considering her to replace Justice Anthony Kennedy on the Supreme Court; the president instead chose Brett Kavanaugh.

Before her appointment to federal court, Barrett was a longtime professor of law at the University of Notre Dame, following a career in private practice and clerkships for Scalia and Judge Laurence Silberman of the D.C. Circuit Court of Appeals.

Conservatives expect Barrett to position herself on the high court similarly to Scalia. Her confirmation would cement the court’s conservative majority, 6-3, and at 48 years old, she would be the youngest justice on the bench.

READ MORE: ‘As ugly and divisive as it was for Kavanaugh’: Midwest voters brace for Supreme Court fight

Barrett was favored by White House chief of staff Mark Meadows and counsel Pat Cipollone, who both led the president’s search for a nominee, as well as Senate Majority Leader Mitch McConnell, R-Ky., who described Barrett as “an exceptionally impressive jurist.”

“As our nation continues to mourn Justice Ginsburg and honor her trail-blazing legacy, it does seem fitting that another brilliant and talented woman at the height of their shared profession would follow in her footsteps onto the Court,” McConnell said in a statement Saturday.

Republican Sens. Mike Braun and Todd Young from Barrett’s home state of Indiana also pushed for her in conversations with the president. Young said in a statement that he would work to confirm Barrett as quickly as possible, adding, “anyone who fairly evaluates her superb qualifications and temperament will agree that Judge Amy Coney Barrett is the right person for the job.”

Republican Sen. Lindsey Graham, R-S.C., who as chair of the Senate Judiciary Committee will lead Barrett’s confirmation hearing and has set a short timeline for moving her nomination through that process and bringing it to a vote before Election Day, called her “highly qualified” and “an outstanding Supreme Court nominee by President Trump.”

“Her record as a judge and her own words establish that she will be a clear and present danger to reproductive rights, LGBTQ rights, labor rights, voting rights, civil rights, and many more,” Sen. Ed Markey, D-Mass., said in a statement Friday night.

Brenda Feigen, who co-founded the ACLU Women’s Rights Project with Ginbsurg in 1972, called Trump’s pick “especially disappointing,” though she said she knew Trump would pick someone who represents “a right-wing philosophy” that she felt would “diminish the rights of others, including women.” 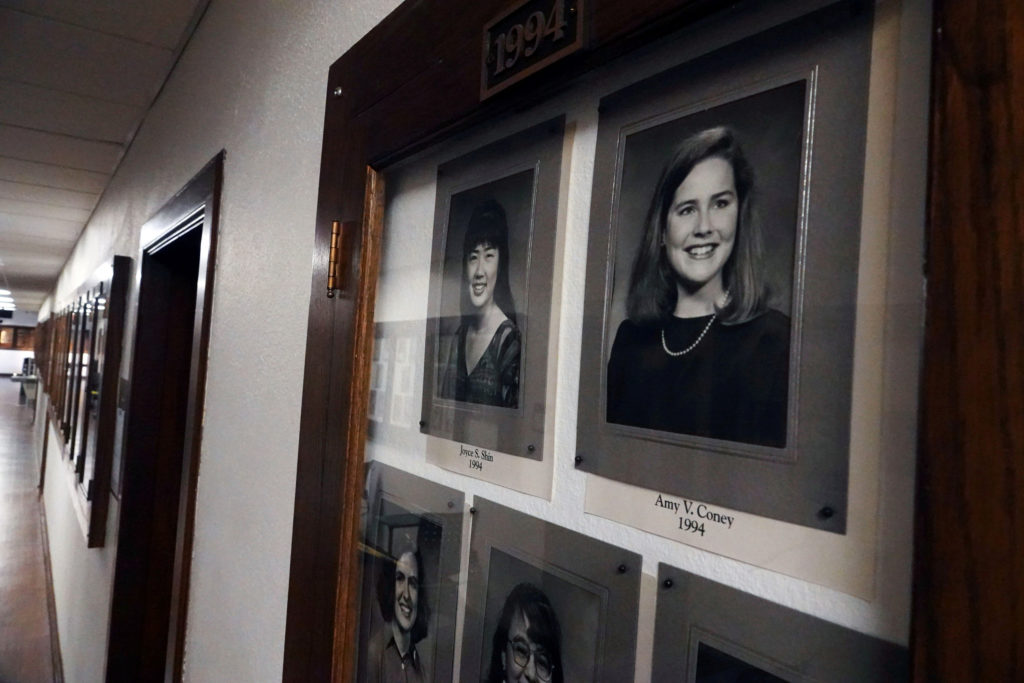 During her short time on the federal bench, Barrett has issued conservative opinions on immigration, the Second Amendment and abortion. She joined a dissent against a ruling striking down an Indiana law requiring parental notice for minors seeking abortions. In another case, she joined a dissent claiming that the Supreme Court had not yet established precedent on whether abortions based on sex, race or disability can be banned, allowing for the possibility that “using abortion to promote eugenic goals” could still be contested.

“We’d expect her to roll back abortion rights, and quite possibly vote to overturn Roe,” said Mary Ziegler, a law professor at Florida State University who focuses on reproductive and family law, referring to the landmark 1973 Roe v. Wade ruling that guaranteed a woman’s right to an abortion in the U.S. Ziegler noted that any 6-3 conservative Court would likely move to further restrict abortion rights.

As a law professor at her alma mater, Notre Dame, Barrett was a member of Faculty for Life, an anti-abortion group. She and her husband, Jesse, are members of People of Praise, a Christian group that controversially referred to women leaders as “handmaids.” Civil rights groups have also cited concerns about whether she would uphold protections for LGBTQ Americans.

But people who know Barrett say her judicial rulings are not dictated by her religious views.

READ MORE: What every Democratic senator has said about filling a Supreme Court vacancy in an election year

“Her judicial philosophy and her personal ideology are two different things,” said Stephen Yelderman, a law professor at Notre Dame Law School, where he’s been a colleague of Barrett’s for the past eight years. “She understands what it means to be a judge, what it means to apply the law. She’ll follow the law and take the law where it leads her, even if she doesn’t always like what the result turns out to be.” He described Barrett as “incredibly intelligent and humble.”

During Barrett’s 2017 nomination process, 450 of her former students sent a letter to then-Senate Judiciary Chairman Chuck Grassley, R-Iowa, and Ranking Member Sen. Dianne Feinstein, D-Calif., urging for her confirmation. “Her teaching is remarkable, engaging, challenging, and unbiased. Her students universally recognize her brilliance as a legal thinker,” the letter said.

Senate Republicans have already warned of “anti-Catholic smears” by progressives. Feinstein told Barrett during her 2017 confirmation hearing for the seventh circuit, “the dogma lives loudly within you. And that’s of concern when you come to big issues that large numbers of people have fought for, for years in this country.”

Barrett at the time said she would “follow all Supreme Court precedent without fail” and would “never impose my own personal convictions upon the law.”

But she’s also argued in legal scholarship that public response to controversial cases like Roe v. Wade “reflects public rejection” of the idea that legal precedent should remain unchanged.

In a statement earlier this week, Feinstein said, “If we confirm an individual to Justice Ginsburg’s seat who disagrees with the need to protect women’s access to abortion, then the reproductive rights that women have fought so hard to gain could well be lost. We can’t let that happen.”

While Democrats will likely press Barrett on whether she considers Roe v. Wade settled law, they’re also planning to focus on how the president’s Supreme Court nominee will affect Americans’ access to health care. Barrett could help a 6-3 conservative Court strike down the Affordable Care Act. She has criticized Chief Justice John Roberts for his 2012 ruling that upheld central pillars of President Barack Obama’s health care law. “Chief Justice Roberts pushed the Affordable Care Act beyond its plausible meaning to save the statute,” Barrett wrote in a 2017 law review article.

In multiple writings, Barrett has indicated her preference for using the constitutional text as her guide for court decisions rather than legal precedents set by the courts, much like her mentor, Scalia.

“I tend to agree with those who say that a justice’s duty is to the Constitution and that it is thus more legitimate for her to enforce her best understanding of the Constitution rather than a precedent she thinks is clearly in conflict with it,” she wrote in a journal article in 2013.

Barrett’s colleague Yelderman, when asked if he had any advice for her ahead of her confirmation hearings, especially given the political fight that has erupted over filling the seat just weeks before the election, said, “Just be ready. I know that she is.”