Why Biden’s long foreign policy record could be a liability

NEW YORK, N.Y. — After spending the first two months of his 2020 presidential run defending his past views on domestic issues and stumbling over his comments on race, on Thursday former Vice President Joe Biden delivered a campaign speech on a subject he’s deeply familiar with: foreign policy.

Biden served as the chairman of the Senate Foreign Relations Committee, and has more foreign policy experience than the rest of his Democratic opponents.

But his long record as a moderate consensus builder on the global stage may turn out to be a liability in the primaries, especially for Democratic voters calling for a more progressive approach to foreign affairs.

“You would think that Biden would be good or distinctive in this regard compared to the other candidates,” said Shadi Hamid, a senior fellow at the Brookings Institution and expert on U.S. policy in the Middle East. But “a long record isn’t [the same as] a good record, and I think that’s where it becomes complex.”

‘A long record isn’t [the same as] a good record, and I think that’s where it becomes complex.’

In his speech, delivered to a small crowd in the Graduate Center at the City University of New York, Biden acknowledged that “much has shifted” in the international arena in the past few years. The world is more interconnected than ever in facing challenges such as climate change, cyberwar, and mass migration, Biden said. At the same time, authoritarian leaders and nationalism are on the rise in countries like Turkey, Hungary and the Philippines, he added.

With democracy under attack, Biden argued that public trust in institutions has eroded. He blamed President Donald Trump for fomenting division with U.S. allies and failing to unite countries to fight common threats.

“The world sees Trump for what he is: insincere, uninformed and impulsive,” Biden said. “Donald Trump’s brand of ‘America First’ has too often led to America alone, making it that much harder to mobilize others to address threats to our common well-being,” he added.

Biden laid out a vision centered on using the tools of “soft power” and diplomacy, instead of military force, to promote democracy and protect human rights — an approach reminiscent of the Obama years. As president, Biden said he would end Trump’s Muslim ban, which bars certain people from several majority-Muslim countries from entering the U.S. Biden also called for more humane immigration policies at the border.

The former vice president said he would restore America as a global leader in combating climate change, and criticized Trump’s decision to withdraw the U.S. from the Iran nuclear deal, as well as Trump’s approach to trying to broker a deal for North Korean denuclearization.

But when it came to issues like the war in Afghanistan and the Arab-Israeli conflict, Biden’s positions offered a stark reminder of his polarizing record on foreign affairs during his career in the Senate and Obama administration. 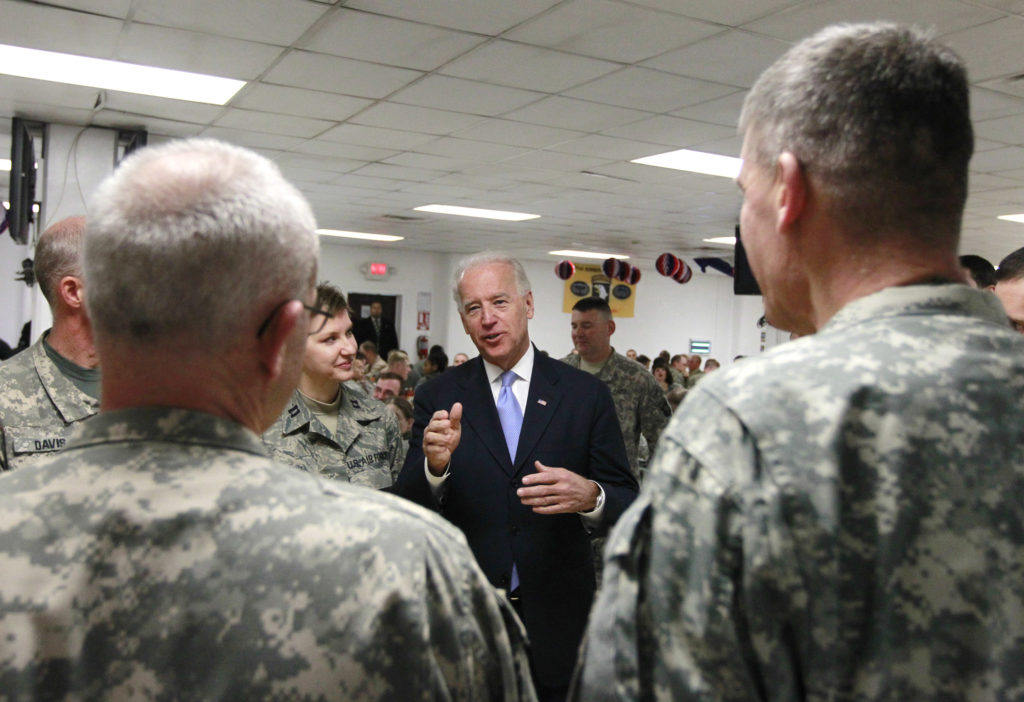 Biden said he had “long argued” for scaling back the United States’ military presence in the Middle East, and vowed to end the war in Afghanistan, but did not offer specifics beyond saying that he would bring home most of the Americans troops still stationed in the country. There were roughly 14,000 U.S. troops in Afghanistan as of May, according to a report from the Congressional Research Service.

He called for an end to the war in Yemen, without spelling out what steps he would take as president to do so. The remark drew a rare round of applause from the audience, which remained largely silent for the duration of Biden’s 45-minute speech.

His comment on the war in Yemen — a conflict that has been exacerbated by a Saudi-led intervention — pointed at divisions within the Democratic Party, as well as the foreign policy establishment, about how to deal with some longtime U.S. allies that have poor human rights records.

Saudi Arabia is an example of a country where “there’s been some serious rethinking about how we do business with foreign allies,” Hamid said. Other Democrats in the race, such as Senators Bernie Sanders and Elizabeth Warren, have shown a willingness to have that conversation, he added. “Biden hasn’t,” Hamid said.

Pointedly, Biden did not refer directly to the Iraq War during his wide-ranging speech. Biden supported the invasion during his time in the Senate, in a vote that later drew heavy criticism during his 2008 run for president.

Critics argued that Biden’s reputation as a foreign policy expert with a record of accomplishment is overblown.

“His experience consisted of having voted for the Iraq War resolution, and generally being a fellow traveler of liberal interventionism. He hasn’t shown much original thought or initiative in foreign policy,” said Barnett Rubin, who served as a senior adviser to the special representative on Afghanistan and Pakistan under President Barack Obama.

“Biden comes from an era,” Rubin said, “of attempts at bipartisan national security policy, based on common threat perceptions” about enemies like the Soviet Union. But that Cold War mentality no longer applies, Rubin said. “The bipartisan consensus doesn’t exist.”

But others argued it is still too early in the race for candidates, including Biden, to present fully fleshed out foreign policy platforms.

Elections rarely hinge on foreign policy, and so far, the 2020 race is following that pattern, said Tad Devine, a veteran Democratic strategist who served as the chief campaign strategist to Sanders in 2016.

Voters typically pay less attention to foreign policy when the U.S. is not engaged in a highly visible conflict, said Devine, who also served as a senior adviser on presidential campaigns for John Kerry and Al Gore.

“When the nation’s in a war, it changes the perspective of voters about [a president] being able to deal with the life and death of American troops and others,” Devine said. Absent that dynamic in 2020, “it’s not going to be a foreign policy election. It’s going to be an election about Trump, ultimately.”