But for the first time in recent memory, there’s no clear frontrunner among the top Democratic candidates as they enter the final stretch before February — intensifying the pressure they face to avoid a distant second or third-place finish that could sink their campaigns.

This time around, the race has settled into a tight three-way contest between former Vice President Joe Biden and Sen. Elizabeth Warren and Sanders, with Warren emerging over Sanders in recent months as the principal progressive challenger to Biden.

“There is intense pressure on all three. They all need to do very well,” said Raymond Buckley, the chairman of the New Hampshire Democratic Party. Right now, he added, “this is really very much a jump ball.”

There’s still no consensus in the state’s Democratic circles about which candidate has the best chance to recapture the White House, according to dozens of interviews across the state with voters, liberal activists and party operatives, as well as senior officials from several presidential campaigns.

Voters in particular can’t seem to shake concerns about Biden and Sanders’s age and political baggage. Warren’s progressivism trips some up, and many remain skeptical that any liberal candidate could win in a general election. With the Feb. 11 primary just four months away, a large number of Democrats remain fixated on perceived general election weaknesses, underscoring how nervous Democrats are about running against President Donald Trump in 2020, even with the cloud of impeachment hanging over the election.

Sanders supporters and the campaign itself say they never expected the Vermont senator to repeat his 2016 blowout in a packed primary that includes several other top-tier progressive candidates.

“We came into this knowing that it was a completely different race,” said Carli Stevenson, a senior official for the Sanders campaign in New Hampshire. 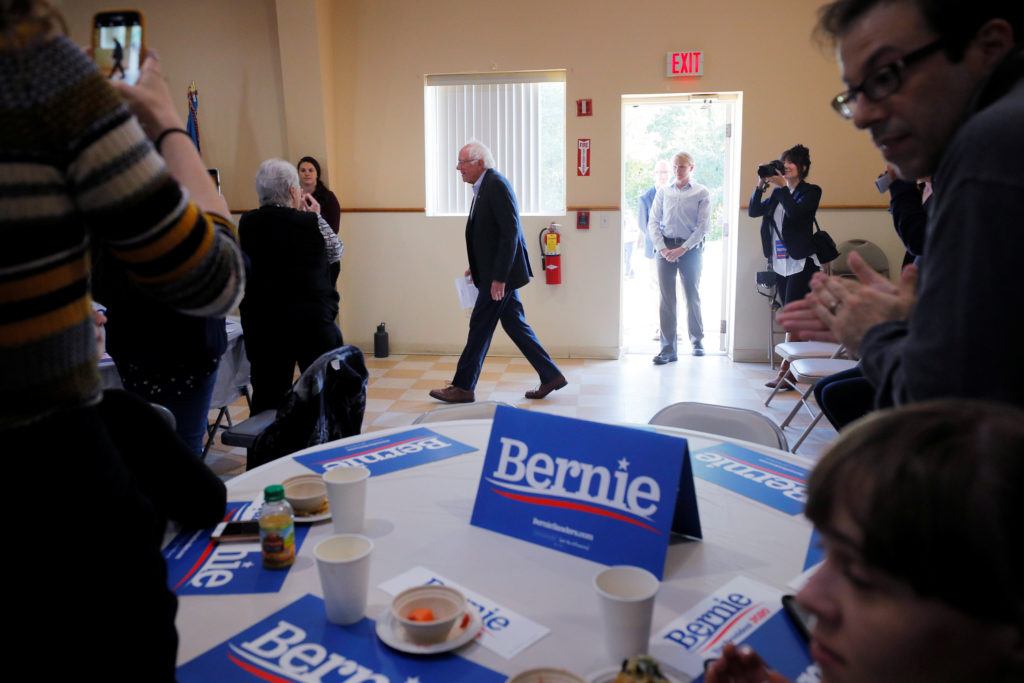 This year, the differences among the candidates go beyond the sheer number of them, or the fact that, in Sanders and Warren, the primary field has two neighboring-state senators with a “homefield advantage” in New Hampshire.

The exit polls in New Hampshire bear this out. Just 26 percent of 2016 primary voters identified as “very liberal,” compared to a combined 69 percent who said they were “somewhat liberal” or “moderate.” And while Sanders won in a landslide, a quarter of Democratic primary voters said his positions on the issues were too liberal.

Three years later, many left-leaning voters are still struggling with how liberal is too liberal. Sanders and Warren “want to move too fast” to the left, said Jennifer Brown, a small business owner from Goffstown and self-described moderate Democrat.

Warren and Sanders’s calls for substantial economic change don’t reflect the reality on the ground in places like Goffstown with thriving local economies, Brown said. “Small town America, as far as I can see in my little world, is doing really well,” she said.

The Biden campaign sees an opening in New Hampshire for a more moderate candidate with bipartisan appeal. Biden announced his candidacy in April, months after Warren and Sanders launched their White House bids, and the campaign initially had a smaller footprint in the state.

Biden remains popular with many local elected officials and longtime party activists. The former vice president has racked up official endorsements, an advantage in a small state where campaigns depend on supporters to help build enthusiasm ahead of the primary.

Still, the overall importance of endorsements remains an open question. Several Democratic state lawmakers who have officially endorsed presidential candidates in 2020 acknowledged in interviews that they have limited sway with voters.

A Warren aide said her campaign was focused on developing a ground game in the state and reaching as many voters as possible. “We’re focusing on building an infrastructure,” the official said. 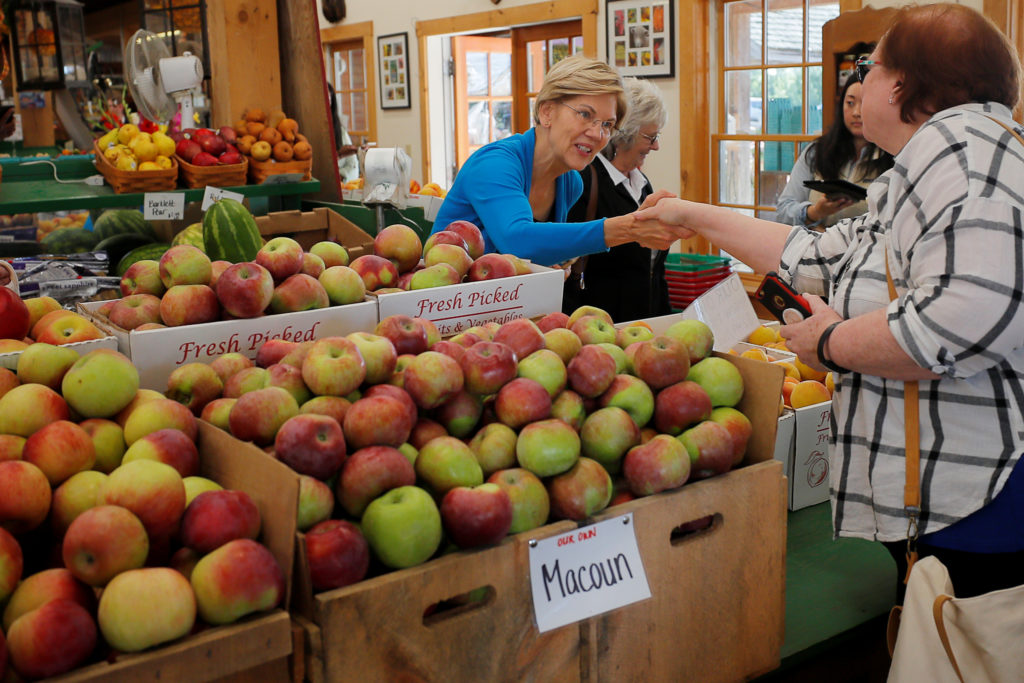 Stevenson, the Sanders aide, said the campaign knew Biden would scoop up many endorsements from party insiders, and has focused instead on expanding its own base beyond younger and more liberal voters. Stevenson said the campaign is targeting older voters as well as less affluent voters, two groups Sanders struggled with in 2016.

Biden supporters pushed back on the narrative that the former vice president has focused more on cultivating support from local leaders than meeting with regular voters in the state. They also dismissed the idea of a recent Warren surge.

But Biden’s lead in New Hampshire slipped over the summer as more voters started tuning into the race. His support among more moderate, middle and working class Democrats — the voters he’ll need to carry New Hampshire and win the nomination — is also not a guarantee.

On a recent afternoon at a VFW hall in the blue collar town of Somersworth, several Democrats said Biden shouldn’t assume he has their vote.

Joe Dreinczyk, a retired contractor, said he was aware of Biden’s hardscrabble upbringing in Scranton, Pennsylvania and years spent riding the train back and forth from Washington, D.C. to Delaware when he was a U.S. senator. But after his decades-long tenure in Congress and two terms as vice president, Dreinczyk, an undecided Democrat, said Biden’s “Amtrak Joe” nickname no longer applies.

“Biden just seems like more of a rich kind of person, whereas Bernie and Warren are more like regular people,” Dreinczyk said. Across the bar, Dave Thibault, a retired ironworker, nodded in agreement. “Biden’s just like any other politician as far as I’m concerned.”

Democratic voters across the state also raised, unprompted, the issue of Biden and Sanders’s age, saying they thought both men were too old to be effective leaders. Sanders, 78, and Biden, 76, are the two oldest candidates in the race; if elected, either would be the oldest president in U.S. history. 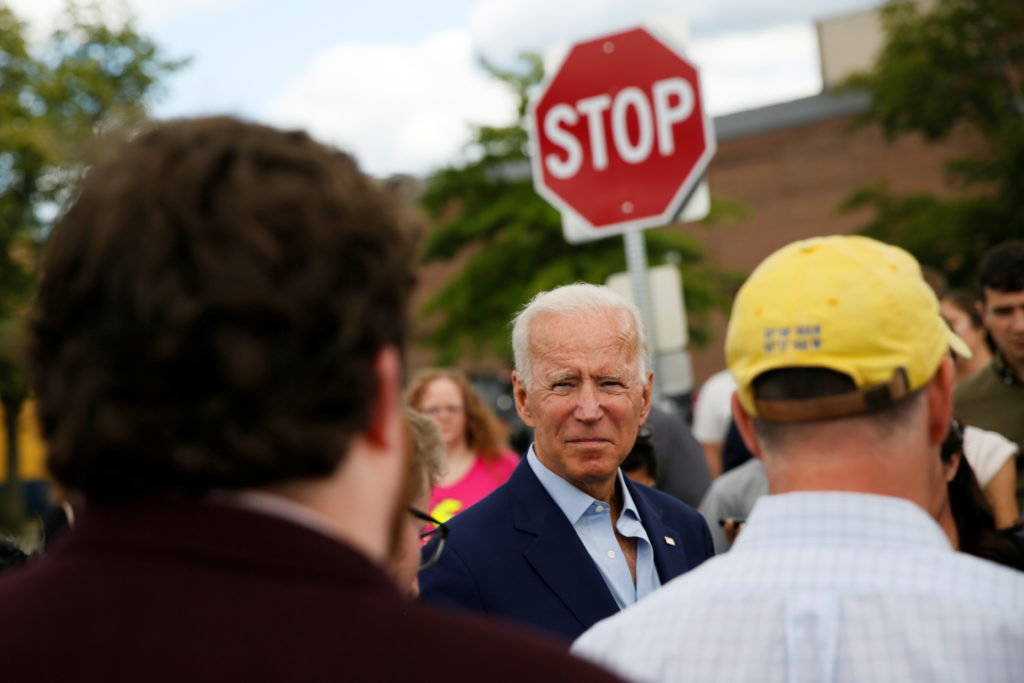 “The old guys just don’t have it. We need someone who can kick some ass, and Elizabeth has the energy,” said Jon Bruneau, a registered Democrat who is also still undecided in the primary race.

Bruneau was sitting on a fence post in a field in Hollis in southern New Hampshire, waiting for a Warren campaign event to begin. Bruneau, who is 52, acknowledged that at age 70 Warren was of the same generation as Biden and Sanders. But he said, without pinpointing why, that Warren “seems younger,” a notion echoed by numerous Democrats regardless of who they’re backing.

Minutes later, Warren jogged up to the assembled crowd and delivered an energetic, 35-minute speech punctuated with several loud whoops. Afterwards, she posed for selfies for well over an hour, in what has become a standard part of her campaign trail appearances.

As she waited on the selfie line, Deb Johnson-Hawkes, a Warren supporter, said the senator’s energy and relatively short career in Washington made her an ideal outsider-style candidate to take on Trump.

“I like Biden. I’ve always liked Biden. But I think his time has passed. He’s showing his age,” Johnson-Hawkes said.

Biden supporters dismissed criticisms that Biden was too old or out of touch. State Rep. Denny Ruprecht, who at 19 last year became one of the youngest people in New Hampshire history to win a seat in the state legislature, said Biden was the most qualified candidate in the race.

“I understand the call for generational change. I love seeing young people in politics. I’m a young person in politics. But experience isn’t a bad thing,” Ruprecht said.