KEENE, New Hampshire — Senator Elizabeth Warren of Massachusetts bounded on stage for a town hall Wednesday evening and, instead of launching into her signature economic policy prescriptions, addressed the new shadow hanging over President Donald Trump and the 2020 presidential election.

“Now we know if Congress does not hold this man accountable,” Warren said, Trump will continue breaking the law. “It’s time for impeachment now,” she added. Then, as quickly as she brought it up, Warren moved on to her regularly scheduled programming.

Warren’s remarks on the issue that could define the Trump presidency, impeachment, lasted all of one minute.

Her reluctance to dwell on the issue, one day after House Speaker Nancy Pelosi formally launched an impeachment inquiry into Trump’s conduct in office, underscored the challenges facing presidential candidates as the fight between congressional Democrats and the White House enters a new phase.

Outside the Beltway, in key early-voting states like New Hampshire, Democrats appeared uncertain of whether the new impeachment strategy would work for the party — or how much Warren and other White House hopefuls should mention the topic on the campaign trail, versus staying focused on issues like health care and the economy.

“I think it’s the right thing to do. And yet I’m concerned there could be a backlash that could hurt Democrats,” said Alison Henry, a university professor and Warren supporter who attended the senator’s town hall event at Keene State College.

“I’m concerned there could be a backlash that could hurt Democrats.”

“If they go forward with impeachment proceedings I think it completely changes the dynamic of the election,” said Joe Keefe, a former chairman of the New Hampshire Democratic Party.

But he argued a drawn-out, highly partisan impeachment fight could also energize Trump’s base in New Hampshire and elsewhere and motivate moderate Republicans who may not be ardent Trump supporters to come off the sidelines and support the president in the general election next year. 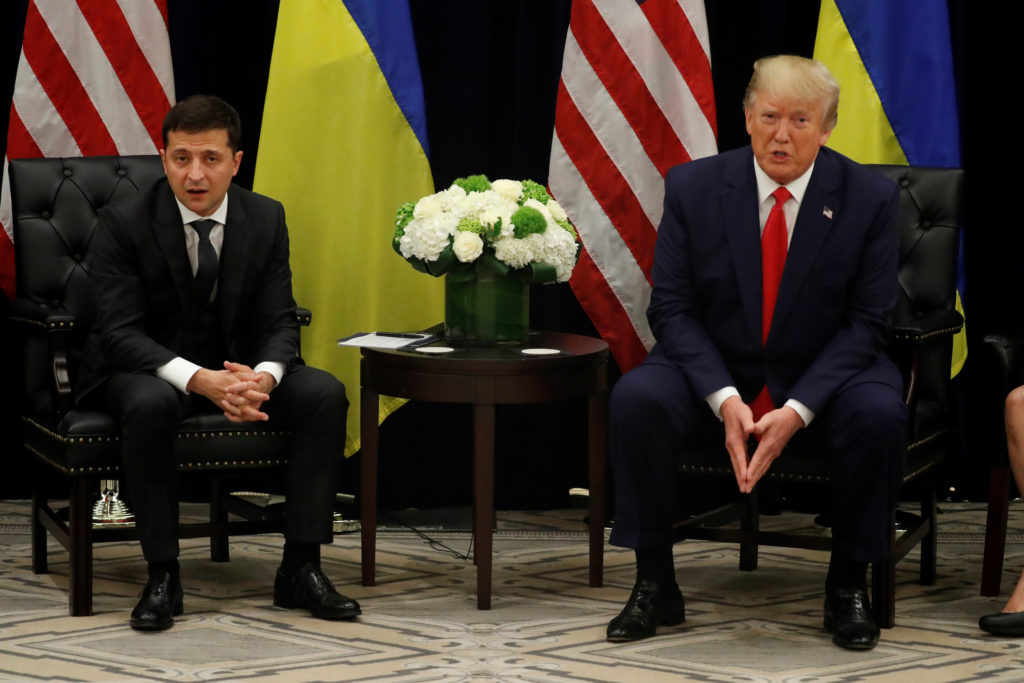 President Donald Trump speaks as Ukraine’s President Volodymyr Zelenskiy listens during a bilateral meeting on the sidelines of the 74th session of the United Nations General Assembly in New York City on September 25, 2019. REUTERS/Jonathan Ernst

Most of the 2020 Democratic candidates, including Warren, have already said for months that they support an impeachment proceeding, and they doubled down on the position after Pelosi’s announcement Tuesday.

Another candidate, Senator Cory Booker of New Jersey, also largely avoided the topic of impeachment during a speech at a political event Thursday morning in Bedford, New Hampshire.

After the event, Booker told reporters the whistleblower complaint made public Thursday was “explosive” and appeared to show “the president is abusing his office.” But Booker argued the impeachment inquiry shouldn’t be the main focus of attention.

“We can deal with multiple issues at the same time,” he said.

Democrats in Washington expressed mounting levels of outrage after the White House released a transcript of a July phone call in which Trump asked Ukrainian president Volodymyr Zelensky to investigate one of his chief 2020 political rivals, former Vice President Joe Biden, and his son. The president dismissed the Democrats’ concerns, and Republicans have so far largely stuck by Trump.

Jon Morgan, a Democratic state senator in New Hampshire who represents a conservative district where Trump is popular, said he supports a full-fledged impeachment effort. But many voters are “sick and tired of political games” in Washington and might not see Trump’s call with the Ukraine leader as “a game-changing situation,” Morgan said.

Congressional Democrats have gone after Trump over so many issues that voters may have trouble distinguishing between serious issues and less significant scandals, he added.

“I think that people who may be on the fence for Trump are going to vote for him” if Democrats go forward with impeachment.

“Think about it,” Morgan said. “How times in the last two years have we said the same thing: ‘Oh, this is it.’”

This latest controversy is picking up steam, however, and things could change quickly. On Wednesday, in addition to releasing the transcript of the July phone call, the Trump administration also turned over to Congress the whistle-blower complaint about the call that first raised concerns about Trump’s interaction with his Ukrainian counterpart.

New information in the whistle-blower complaint, which was released publicly on Thursday, could raise more questions about Trump’s intentions when he asked Zelensky to do him a “favor” and look into unsubstantiated allegations that Biden and his son, Hunter Biden, were connected to corrupt business dealings in Ukraine.

Democrats have claimed Trump withheld military aid to Ukraine that had been approved by Congress in exchange for Zelensky’s help to go after Biden, the current frontrunner for the 2020 Democratic presidential nomination.

Trump said in a news conference Wednesday that he had a “perfect conversation” with Zelensky and did not “threaten anybody.”

The president also called the new impeachment push a “witch hunt” on Twitter earlier in the day, reprising his attacks on Robert Mueller’s nearly two-year special counsel investigation into Russian interference in the 2016 election and ties to the Trump campaign.

In New Hampshire, there were signs Trump’s strategy of counterpunching was resonating with Republican voters.

“Democrats are just shooting themselves in the foot,” said Marty Rouleau, the owner of an auto body shop in Somersworth, a small town in southeast New Hampshire with working class roots. Rouleau said he voted for Trump in 2016 and planned to back him again in 2020.

“I’d rather see us win on the issues.”

“I think that people who may be on the fence for Trump are going to vote for him” if Democrats go forward with impeachment, Rouleau added.

At the town hall in Keene, Warren may have quickly moved past the issue of impeachment in her speech. But she was inundated with questions about it during a short conversation with reporters afterward, a sign that the story may continue dominating news coverage in the days to come whether the candidates like it or not.

“Right now, we have to do what’s right regardless of the politics,” Warren said.

Several Warren supporters at the event appeared to agree, though they said they hoped the primary race would not get consumed by a far-off impeachment fight in Congress.

“I’d rather see us win on the issues,” said Tim Butterworth, a retired high school teacher. “If we’re talking about whether Hunter Biden got a job he shouldn’t have taken in Ukraine that’s a whole different conversation.”