Will this week’s impeachment witnesses make a direct link to Trump?

Several senior administration officials who were directly involved in President Donald Trump’s interactions with Ukraine will testify publicly this week, bringing the president closer to the center of the fast-moving House impeachment investigation.

House impeachment investigators will also hear from additional witnesses who worked on U.S. policy towards Ukraine — including one official who was on the July 25 call between Trump and Ukrainian President Volodymyr Zelensky.

Here’s what to watch for in the second week of public impeachment hearings.

In his closed-door testimony last month, Sondland, the U.S. ambassador to the European Union, told impeachment investigators that there was no requirement that Ukraine investigate former Vice President Joe Biden and his son Hunter Biden to get military aid from the U.S.. Weeks later, Sondland admitted in an amended testimony earlier this month that the military assistance to Ukraine was dependent on them publicly announcing a probe of the Bidens. Biden is a leading contender for the Democratic nomination to take on Trump in 2020, but Sondland did not directly link the decision to the president, providing him with some cover.

On Wednesday, House Democrats will likely press Sondland about what exactly Trump told him about the military aid. Sondland’s response on this point and his overall testimony could be one of the key moments of the week, and perhaps of the entire inquiry.

Sondland will also face new questions about a phone call he had with Trump the day after the president spoke with Zelensky in July. Taylor revealed last week that Trump asked about the investigations on the call with Sondland, and an official who overheard the call has confirmed that to House investigators. If Sondland confirms that publicly, it could be damaging to Trump, who has insisted he did nothing wrong.

Kurt Volker, the former U.S. special envoy to Ukraine, could also provide damaging testimony to the president, but like Sondland, it will depend on how closely he links Trump to the efforts to pressure Ukraine. In his deposition, Volker, who resigned as special envoy to Ukraine in late September, appeared to lay much of the blame on Rudy Giuliani, the president’s personal attorney. Volker said he “pushed back” on Guiliani’s interest in Biden and his son Hunter, who served on the board of the Ukrainian natural gas company, Burisma. 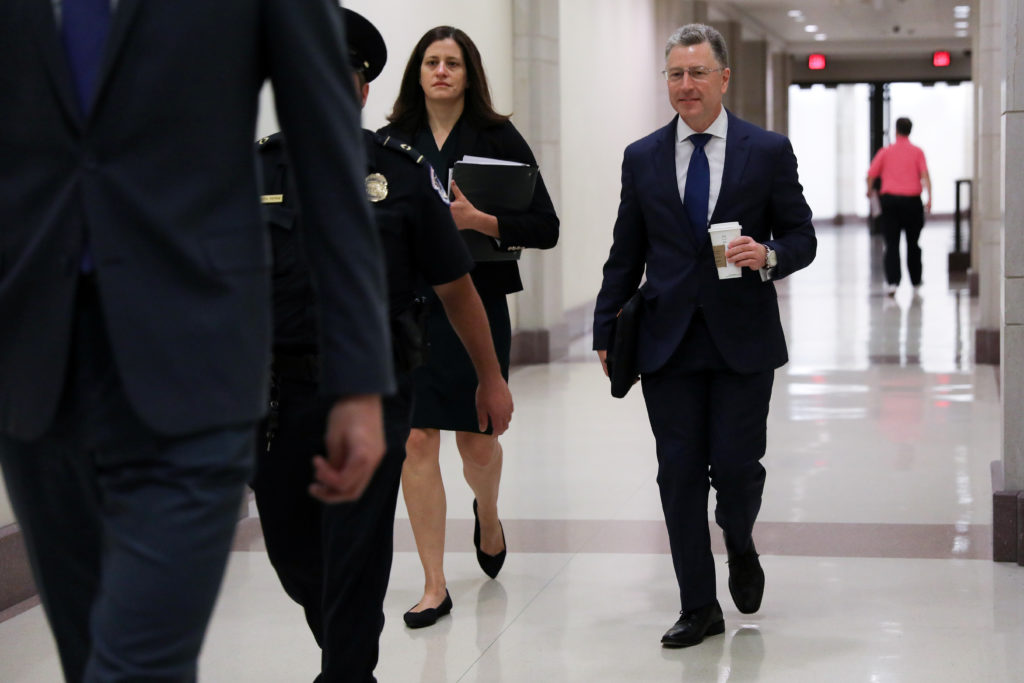 Kurt Volker, U.S. President Donald Trump’s former envoy to Ukraine, arrives to be interviewed by staff for three House of Representatives committees as part of the impeachment inquiry into the president’s dealings with Ukraine, at the U.S. Capitol in Washington, U.S. October 3, 2019. Photo by Jonathan Ernst/Reuters

Volker also acknowledged in his closed-door testimony in October that there was no evidence behind Giuliani’s claims that the Bidens had corrupt business dealings in Ukraine. Biden has also said his son did nothing illegal or improper by serving on the board of Burisma while he was vice president.

This issue will be a sticking point in Volker’s public hearing Tuesday. Last week, Republican lawmakers repeatedly raised the debunked corruption theories surrounding the Bidens. It may be harder for them to do so if Volker shoots the claims down in public.

A key first-hand witness to the July 25 call

Democrats launched the impeachment inquiry after learning about Trump’s July 25 phone call with Zelensky. Yet the exact content of the call, in which Trump asked Zelensky for a “favor” to “look into” the Bidens, has been hotly debated. The White House released detailed notes of the call, but it is not a transcript, and questions remain about what, if anything, has been held back. Democrats have also questioned why the notes about the call were placed on an especially secure server, which is unusual for that kind of memo.

On Tuesday, Lt. Col. Alexander Vindman will be the first to give the public a firsthand account of the call.

On Tuesday, Lt. Col. Alexander Vindman will be the first to give the public a firsthand account of the call. Vindman, who serves as the director of European affairs at the National Security Council, was one of numerous officials — the exact number is unclear — who listened in to the conversation. In his closed-door testimony, Vindman said he raised concerns after the call, but was rebuffed by the White House.

Any new information Vindman may provide about the call, or the White House response to his concerns, would be explosive. But even if Vindman does not offer new details, his account of the call is sure to be one of the more dramatic moments of the public hearings to date.

In the first round of public hearings last week, Republicans criticized Democrats for basing the impeachment investigation on “hearsay” evidence from witnesses who did not have firsthand knowledge of Trump’s involvement with Ukraine. Democrats countered that the White House and State Department have blocked key witnesses from testifying. Nevertheless, the GOP talking point seemed to resonate — at least in the opening round of public hearings.

After Vindman testifies, some Republicans could shift away from the hearsay defense. GOP lawmakers have already changed their strategy multiple times during the impeachment inquiry, as they search for new ways to defend the president. 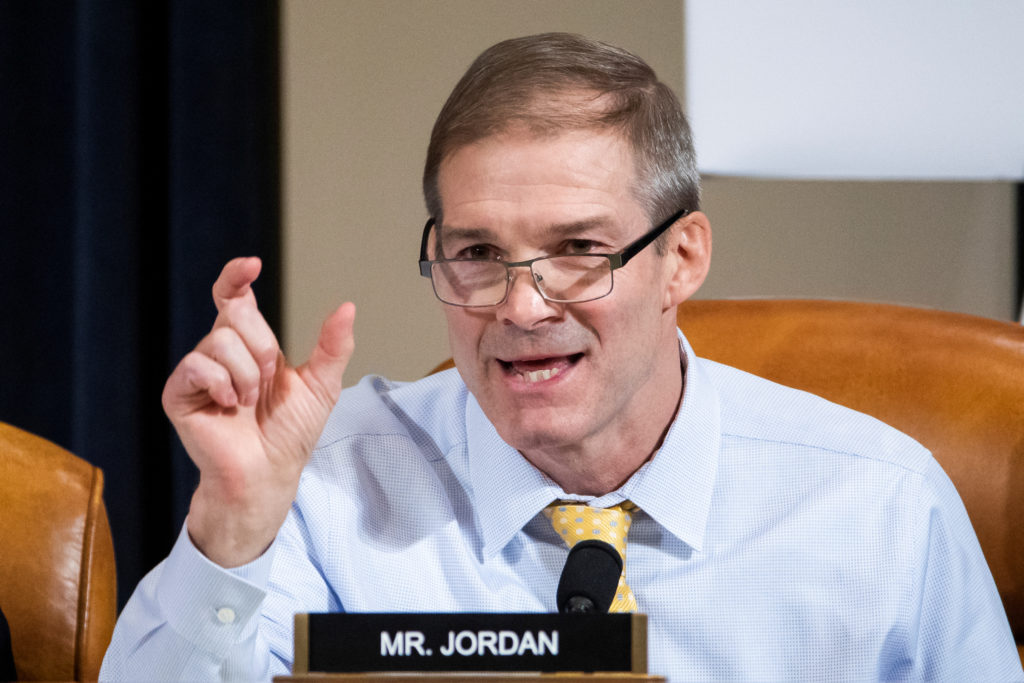 All along, however, Republicans have largely avoided defending the substance of the allegations against Trump. The question is, can they keep that up for the rest of the hearings without suffering any political damage, or will that strategy eventually wear thin with the public?

Lara Cooper, the deputy assistant secretary of defense for Russia, Ukraine, and Eurasia, provided key details in her closed-door testimony about the process of withholding military aid from Ukraine. Cooper said that Ukraine was concerned after finding out in August that the approximate $400 million in aid was being withheld, corroborating testimony from other U.S. officials.

But Cooper’s testimony in October was interrupted by a group of House Republicans who entered the secure room to protest the private depositions. The protest delayed Cooper’s deposition by several hours, and overshadowed her testimony as Republicans and Democrats sparred about the investigation process.

Republicans will not be able to delay or distract from Cooper’s public testimony Wednesday the same way they did in her closed-door deposition. She is the Democrats’ best chance to spell out exactly how the aid was withheld, and how it impacted Ukraine on the ground in its war with Russia.

Can Democrats move the needle?

By week’s end, the public will have heard from some of the House Democrats’ most important witnesses — officials like Sondland, Taylor and others who played key roles in shaping Ukraine policy. Their testimony could sway the American public; polls taken after the week is over will provide an important snapshot on support and opposition to the impeachment investigation.

But it’s unclear whether the week of blockbuster testimony will change the minds of House Republicans. So far, GOP lawmakers have not shown any signs of abandoning the president. And Trump has kept up a constant stream of attacks against the witnesses and Democrats, even though he said on the first day of the public hearings that he was not paying attention to them.

If the week ends as it began, with both sides entrenched, Republicans can claim that as a victory. It’s on Democrats to move the needle, and they will be under immense pressure this week to do so.