Day 2 of the impeachment hearings, and what we learned from Amb. Yovanovitch

Former U.S. ambassador to Ukraine Marie Yovanovitch put a human face on the House impeachment proceedings Friday with riveting testimony about her career in the foreign service and abrupt removal by the White House from her post in Kiev earlier this year.

There were no bombshells or a lot of new details as her testimony concluded the first week of public hearings in which Democrats made their case against President Donald Trump. Republicans also took advantage of the public hearing to poke holes in the Democrats’ arguments.

Here are some key takeaways from Friday’s hearing:

Yovanovitch served 33 years in the foreign service, including in five “hardship posts.” She provided dramatic details of the dangers foreign service officers face in her opening statement. When she was in Uzbekistan, a gunman attacked the U.S. embassy in Tashkent; in Moscow, in 1993, Yovanovitch said she was “caught in the crossfire” between government and paramilitary fighters as she tried getting to the U.S embassy there.

“It took us three tries—me without a helmet or body armor— to get in the vehicle to go to the embassy,” Yovanovitch said.

Democrats praised her service to the country. Republicans did as well and refrained from attacking her credentials or credibility as a witness. The Republicans’ restraint was undercut by Trump, however, who criticized Yovanovitch on Twitter as the hearing began.

“Everywhere Marie Yovanovitch went turned bad. She started off in Somalia, how did that go?” Trump said. He also criticized her tenure as ambassador in Ukraine.

The tweet was a reminder that Trump does not plan to back down at any point during the impeachment investigation, even if it means attacking witnesses who Republicans are wary of criticizing in public. 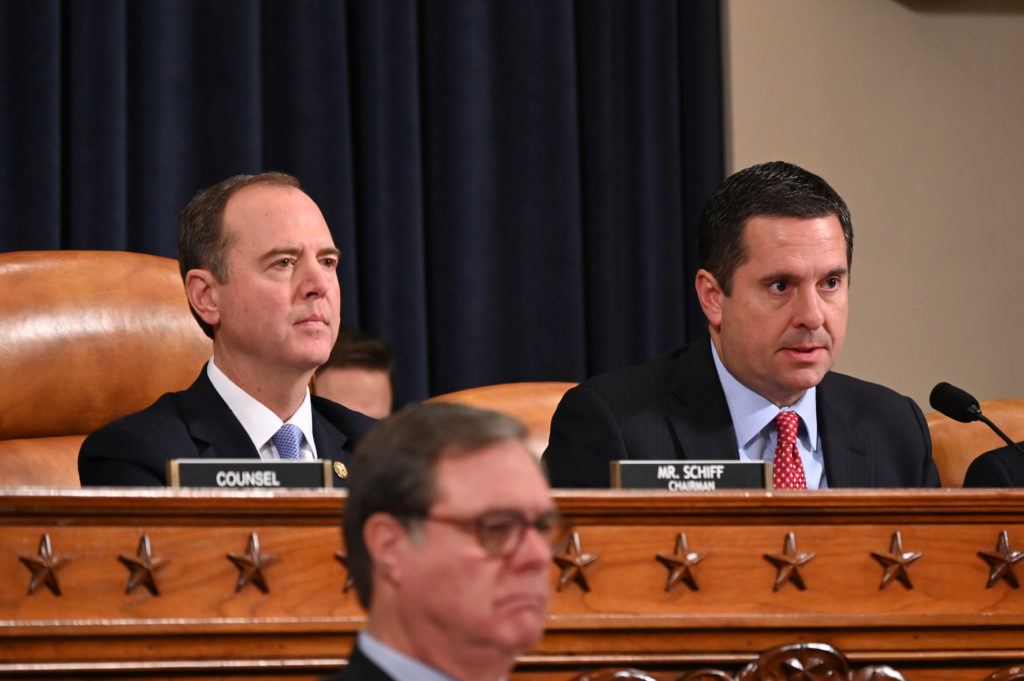 At the hearing, Yovanovitch drew attention to the personal challenges she faced in being fired from her post in Ukraine. But she also issued a scathing critique of U.S. foreign policy under Trump, arguing that her ouster fit into a larger pattern of attacking career, nonpartisan diplomats who serve overseas.

“This is about far more than me or a couple of individuals,” Yovanovitch said in her opening remarks. Attacks against experienced foreign policy officials is “leading to a crisis in the State Department.”

Republicans countered that, as president, Trump is entitled to push Ukraine to combat corruption. But Republicans have still not developed a good explanation for why Trump, Sondland and others seemed focused exclusively on alleged corruption involving Biden, one of the president’s main 2020 political opponents.

Under questioning from Rep. Michael Turner, R-Ohio, Yovanovitch said it was “unusual” for the EU ambassador to “be responsible for all aspects of Ukraine.” Ukraine is not a member of the European Union, though political unrest in the country in recent years has centered on whether or not Ukraine should join it.

Sondland was not the only official tasked with working on Ukraine over the summer. He worked closely with Kurt Volker, who served as special envoy to Ukraine, and Taylor, among others. But Sondland was nevertheless an important figure in U.S.-Ukraine relations at that time, , talking frequently with Ukrainian officials as the White House sought a public announcement of investigations into the Bidens.

“Threatened” by the president

In his July 25 phone call with Ukrainian President Volodymyr Zelensky, Trump criticized Yovanovitch and made an ominous-sounding prediction that she would “go through some things.”

It’s unclear exactly what the president meant by that. Yovanovitch testified Friday that she wasn’t sure, but that the comment had been deeply worrying. “I didn’t know what to think. But I was very concerned,” she said. “It didn’t sound good. It sounded like a threat.”

Yovanovitch’s side of the story reinforced the Democrats’ argument that the White House, and at times even Trump himself, has tried to block or intimidate witnesses from testifying. During the hearing, the House Intelligence Chairman Adam Schiff, D-Calif., appeared to equate both Trump’s comments about Yovanovitch in the July 25 call and on Twitter Friday to witness intimidation. “It’s designed to intimidate, is it not?” Schiff asked Yovanovitch.

The issue for Trump goes beyond his specific comments about Yovanovitch. Democrats have said that they might consider White House efforts to impede the impeachment investigation — including pressuring witnesses and refusing to turn over documents — as obstruction of justice, and include the charge in articles of impeachment.