Will Warren’s bet against big money pay off?

Sen. Elizabeth Warren is climbing in the polls in the Democratic race for president. But she is tossing aside one staple of top candidates: the high dollar fundraiser.

When Warren vowed in February to rely only on smaller donations, that pledge was only for the primary. But now her campaign says the decision would extend to the general election, if she is the nominee.

Like most other Democrats, Sen. Elizabeth Warren has blamed the “wealthy and well-connected” for problems from high prescription drug prices to predatory loans. Refusing money from them reinforces the image she’s built since the start of her political career — someone who will fight for everyday Americans.

Voters “have a right to know how the possible future leaders of our party are spending their time and who their campaign is rewarding.”

“This is a really powerful message to the American people about who Elizabeth Warren would fight for as president,” said Tiffany Muller, president of the left-leaning campaign finance advocacy group End Citizens United. “She is building and powering her campaign from small dollar donors who will often then become part of her activist base and her volunteer base.”

Democratic candidates across the country have taken on campaign finance reforms in recent years, and in particular how they run their own races, Muller said. In 2018, a record-number 48 candidates who did not accept money from corporate political action committees were elected to the House and Senate. In the race to be the party’s 2020 presidential nominee, the Democratic National Committee has put a greater emphasis on small donors, in part by requiring candidates to reach a certain number of individual donors to qualify for debates. And all Democratic presidential candidates still in the race have chosen not to accept money from single candidate super PACs, which funnel money almost exclusively to one candidate.

But what makes Warren’s decision to reject wealthy donors notable is that she’s also rejecting the big-money courting that comes with being on the path to party nominee.

READ MORE: Warren and Sanders are banking on small donors. Will it pay off?

On the trail, Warren has made rules about what kinds of donations her campaign will accept in an effort to stand out from her primary opponents. She doesn’t attend any big-money fundraisers for her campaign (neither does Vermont Sen. Bernie Sanders). Her campaign will reject contributions of more than $200 from “executives” of tech companies, hedge funds, private equity firms and big banks. She calls on her competitors to disclose the names of campaign bundlers, and the dates and locations of fundraisers. She’s also released a new policy that calls for an overhaul of campaign finance rules, including decreasing the individual contribution limit from $2,800 to $1,000.

“I think Democratic voters should have a right to know how the possible future leaders of our party are spending their time and who their campaign is rewarding,” Warren wrote in the post outlining the new policy.

Warren has so far proved that she can raise formidable sums from smaller donors. In her most recent financial filings, she boasted the second largest haul — nearly $25 million — putting her just behind Sanders’ $25.3 million.

She boasts nearly $26 million cash-on-hand, which will be critical in the competitive months ahead of the Iowa Caucuses when other candidates struggle to hold onto their cash reserves.

Muller said that skipping out on fundraisers has allowed Warren to “campaign in a different way” and talk to people, not just “big donors.” 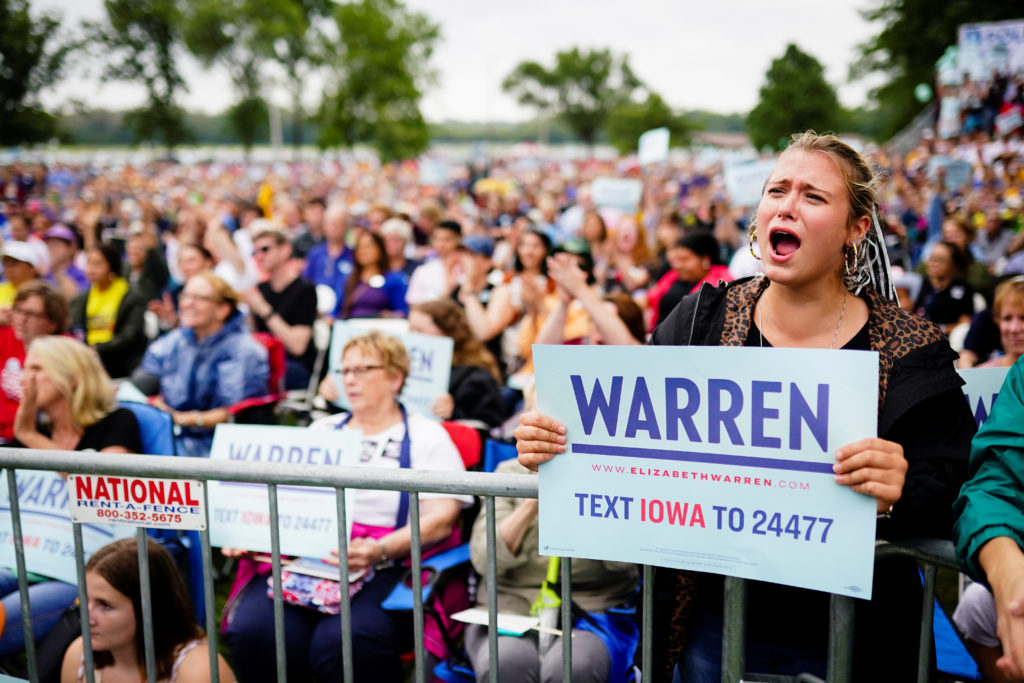 Polk County, Iowa’s Democratic Party chairman Sean Bagniewski has seen that dynamic play out on a local level too.

He made the decision to stop relying heavily on big donors, and instead encouraged people to donate to the party via the Democratic online fundraising site ActBlue.

Before making the change, Bagniewski said the flow of money was unreliable. “If it was a bad financial climate or if there was a recession the county party suffered because you’re depending on just a couple people.”

Now, Polk County Democrats raise “hundreds of thousands of dollars” through ActBlue. That includes $700 they raised in about two hours for the “fiberglass parade donkeys” the party brings to events.

More seriously, Bagniewski said that another consequence of the decreased dependence on wealthy donors has been a significantly larger pool of donors and volunteers who donate — either their time or money — to down ballot-races, something from which the Warren campaign has benefited, too.

On the ground in Iowa, Bagneiwski sees Warren’s strategy working in real time.

“Ronald Reagan was reelected in a landslide in 1984. He didn’t hold a single fundraiser.”

At the Polk County Steak Fry in August, he said that hours after her speech, when other candidates might jump on the phone with donors, Warren instead had one of her signature “selfie lines” for two hours.

By not spending her time on the phone soliciting donors, she has time to meet face-to-face with voters, he said.

In some ways, it’s a return to the country’s political roots. Big-pocketed donors are a relatively new phenomenon in American politics, Dan Weiner, senior counsel for the non-partisan Brennan Center’s Democracy Program said.

“Ronald Reagan was reelected in a landslide in 1984. He didn’t hold a single fundraiser,” Weiner said. “He had the benefit of a functional presidential public financing system.”

Pricey television ads and social media operations have made campaigns more expensive. Recent Supreme Court decisions have also allowed corporations to spend money to support candidates, raising the stakes. Lastly, the high price of campaigning has led presidential campaigns to stop using public financing, all of which have led to a greater reliance on big-pocketed donors, according to Weiner.

READ MORE: Why New Hampshire could be the jump ball of the 2020 primaries

There are some signs that politicians and voters are starting to reject the status quo. Recent financial reports show that 22 freshman House Democrats who represent battleground districts raised at least $400,000 in third quarter fundraising this year without accepting corporate PAC money. One, Rep. Katie Porter, D-Calif., raised a million dollars from 26,000 individual donors

And, a recent survey commissioned by End Citizens United shows 67 percent of voters in battleground states say limiting the influence of money in politics is a top, or major priority.

Warren’s move “expresses an aspiration which used to be shared [that] we don’t want the presidency tainted with even the appearance of being emboldened to big donors,” Weiner said.

But it’s hard to ignore that the system remains the same, at least for the 2020 election, which means there are a few ways Warren’s approach could be flawed.

Sen. Elizabeth Warren talks to PBS NewsHour anchor and managing editor Judy Woodruff about her campaign, including her plans to tax the wealthy.

Rufus Gifford, who served as the finance director for the Democratic National Committee, and led President Barack Obama’s finance team for his 2012 re-election bid, says Warren is making a mistake — not just for her campaign, but for the entire Democratic Party.

He says his greatest concern is that if Warren is the nominee, she’ll be unable to compete with Trump’s enormous fundraising apparatus.

“The stakes are too high in the general election. It’s not just about you and your primary candidates and winning Iowa and New Hampshire, it’s about the entire country,” Gifford said in an interview. “Every single Democrat is hanging their hopes on you.”

Trump’s reelection campaign and the Republican National Committee raised a combined $125 million last quarter, a new record, and show no signs of slowing down.

While Warren has sworn off fundraisers for her own campaign, her campaign has clarified that she would attend fundraisers for the DNC and state parties. Warren headlined a DNC fundraiser Wednesday along with 2020 competitor and former Vice President Joe Biden. A $50,000 donation earns donors a table at the reception featuring Democratic leaders like House Speaker Nancy Pelosi.

Situations like that will become more frequent as Election Day gets closer, Gifford said, which makes it harder to create a firewall between campaign and party. In 2012, for instance, Gifford was finance director for Obama’s 2012 reelection campaign but also a defacto point person for DNC and state party budgets.