WASHINGTON — When Secretary of State Mike Pompeo arrived in the United Arab Emirates on Friday, no U.S. ambassador was there to welcome him.

The post has been vacant for nine months. The Republican donor President Donald Trump chose for the job, John Rakolta Jr., hasn’t been approved by the Senate.

Trump has frequently accused Senate Democrats of using the chamber’s complex web of rules to sabotage his nominees. But Rakolta’s selection illustrates the challenges of filling a high-level government position with a candidate from the corporate world who has no prior diplomatic experience.

Rakolta, a construction company CEO, contributed $250,000 to Trump’s inaugural committee. His wife and children donated tens of thousands of dollars more to Trump’s campaign as well as to other GOP causes. Rakolta is related by marriage to Ronna Romney McDaniel, the chairwoman of the Republican National Committee. Rakolta’s wife is McDaniel’s aunt.

“My father wanted me to learn the rewards of hard work. It worked.”

Congratulations to Walbridge Chairman and CEO John Rakolta, Jr. on being named to the Detroit 500: https://t.co/zscAK65M49 pic.twitter.com/dPVhxRa1Qa

His nomination moved so slowly in the Senate that it was sent back to the White House earlier this month — one of more than 270 of the president’s picks returned because they weren’t acted on before the end of that session of Congress. It’s not unusual for a White House to re-nominate many of the same people, but the Trump administration hasn’t said yet whether it would re-submit Rakolta’s name.

Rakolta’s qualifications and business background, which includes a dormant partnership with a firm headquartered in Abu Dhabi, the UAE’s oil-rich capital, was still being scrutinized by the Senate Foreign Relations Committee when the session ended.

At that point nothing that would derail his chances of confirmation had emerged from the review. A Capitol Hill aide familiar with the matter described it as the back and forth that comes with “complex nominee files,” a reference to the careful checking required to ensure there are no conflicts of interest. The aide wasn’t authorized to speak publicly and requested anonymity.

Still, Trump upended decades of State Department practice in tapping Rakolta in May. If he’s re-nominated and eventually confirmed, Rakolta would become the first political appointee to serve as ambassador to the Emirates, a small yet ambitious nation aiming to expand its regional clout. The job has been filled exclusively by career foreign service officers since 1972, when the United States and the UAE established formal diplomatic relations.

The U.S. ambassador’s office has been vacant since late March when Barbara Leaf retired from the State Department after a 33-year diplomatic career. By comparison, Leaf was confirmed as ambassador in November 2014, about four months after she was nominated.

The UAE is host to about 5,000 U.S. troops and Washington’s main listening post for Iran is located in Dubai, the largest city in the Emirates. The UAE remains a key defense ally to America. U.S. fighter jets are stationed at Al Dhafra Air Base. Dubai’s massive Jebel Ali port is the U.S. Navy’s busiest foreign port of call as it can host even aircraft carriers. 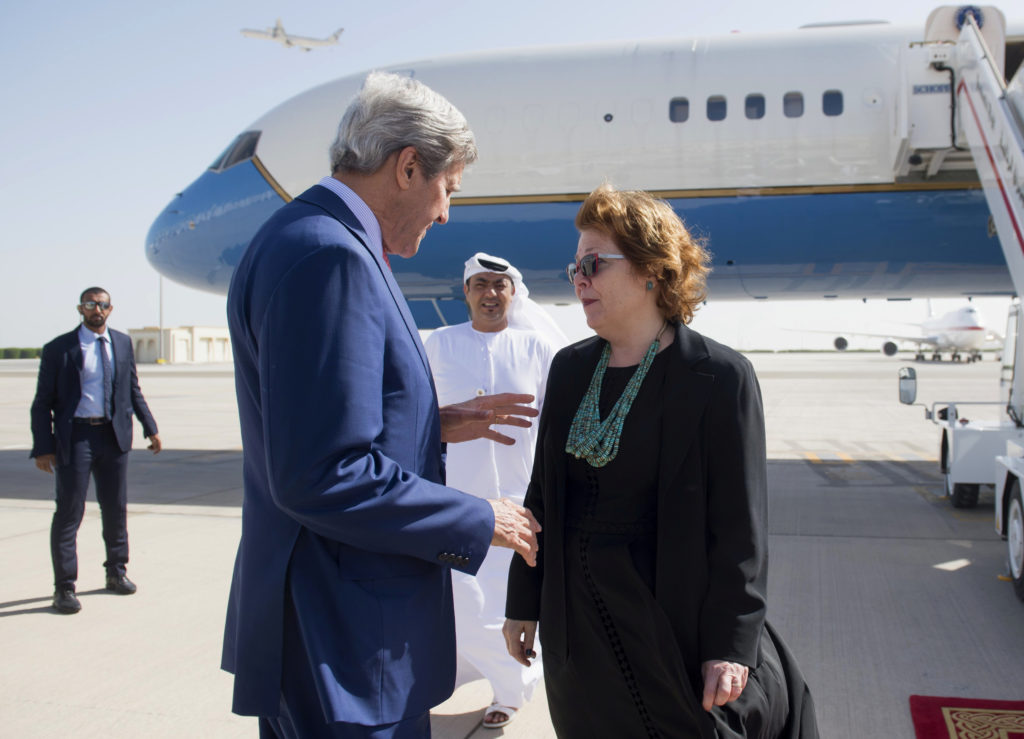 US Secretary of State John Kerry speaks with US Ambassador to the UAE Barbara Leaf prior to departing Abu Dhabi, June 9, 2016, as he heads back to Washington. Photo By Saul Loeb/Pool via Reuters

Rakolta is chairman and CEO of Walbridge Aldinger, a construction firm headquartered in Detroit. He said he’ll resign from the company if his nomination clears the Senate. He’s pledged to recuse himself from issues in which he may have a financial interest although he will continue to be a “passive investor” in Walbridge, according to documents filed with the U.S. Office of Government Ethics.

He initially supported Florida GOP Sen. Marco Rubio for president and didn’t back Trump until just before the Republican National Convention in July 2016. Rakolta was one of many Republicans who grappled with supporting a candidate who seemed to revel in offending women and immigrants. But Rakolta eventually jumped aboard, joining Trump’s finance committee in Michigan to help raise money for the campaign.

In addition to giving $250,000 to Trump’s inaugural committee, Rakolta also contributed $150,000 to the Republican National Committee, according to Federal Election Commission records. He also donated to the campaigns of Rubio, Sen. Charles Grassley of Iowa, and Rep. Jack Bergman of Michigan.

His wife, son and daughters have contributed more than $281,000 since 2016 to Trump Victory, a joint fundraising committee for the presidential campaign and other Republican organizations. Rakolta’s son, John III, who is an executive at Walbridge, also gave $15,000 to the Republican National Committee last year and he and his sister Lauren Rakolta each donated $5,400 directly to Trump’s presidential campaign.

Walbridge formed a joint venture with the Abu Dhabi-based Amana Investments and “successfully performed certain construction work together” between 2003 and 2013, according to Jad Aoun, a spokesman for Amana. Although the partnership has not been dissolved, Aoun said the joint venture has “no plans to pursue work.”

Terry Merritt, a spokeswoman for Walbridge Aldinger, said last year that the company has no active contracts in the Emirates or elsewhere in the Middle East.

Information on Builtforgood.com , a Walbridge Aldinger web site, described the company’s involvement in Masdar City, a government-backed clean energy campus just outside of Abu Dhabi that hosts the International Renewable Energy Agency. Initially estimated in 2006 to be built for $22 billion, officials later decided to scale back Masdar City amid a drop in crude oil prices and after Dubai’s financial crisis in 2009.

Masdar is run by Mubadala, the Abu Dhabi sovereign wealth fund estimated to have assets of around $250 billion. Merritt said Walbridge Aldinger has not been involved in the Masdar project since 2011.

All presidential nominees are required to submit a completed questionnaire from the committee, a background investigation conducted by the FBI, and a financial disclosure report certified by the Office of Government Ethics.

Accepting a senior-level government job may require a nominee to sell off assets or agree to recuse themselves from matters that directly involve their financial interests. Several of Trump’s prior nominees from the business world eventually bowed out after they deciding that the transition didn’t make financial sense for them and their families.

The president’s first pick to be Army secretary, billionaire businessman Vincent Viola, withdrew from consideration because of financial entanglements. So did venture capitalist Philip B. Bilden, Trump’s initial choice for Navy secretary. Todd Ricketts, a co-owner of the Chicago Cubs, was nominated for deputy Commerce secretary but pulled out after he was unable to resolve conflict-of-interest issues.

Left: U.S. Secretary of State Mike Pompeo and his wife Susan disembark from their plane as they arrive at Abu Dhabi International Airport in Abu Dhabi, United Arab Emirates, January 11, 2019. Photo By Andrew Caballero-Reynolds/Pool via Reuters