California Voters Ask: What Happened to Our State?

A remarkable thing happened in California this past weekend. Voters who are Democrats, Republicans and everything in between came together to talk about how to get their state government back on track. Notably, there was little yelling — mostly they listened respectfully to one another. 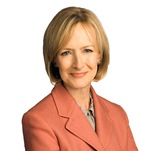 By now, everyone has heard about dysfunction in the country’s most populous state. A multi-billion dollar deficit, drastic cuts to schools and universities, laid-off teachers, police and fire fighters, and the worst bond rating — the metric governments rely on to make it cheaper to borrow money — in the nation.

Not only are the symptoms bad, it’s been all but impossible to find a cure. Republicans and Democrats in the state capital, Sacramento, are butting heads over whether and how much to cut spending or raise taxes and neither side is willing to compromise. And all this only seven months after a new governor took office, pledging to find a solution. Gov. Jerry Brown first vetoed a budget from fellow Democrats, but then this week abruptly made peace, announcing he’d given up on finding common ground with Republicans.

The assumption might be that Golden State voters are also at each other’s throats, as divided as are their elected leaders. But at that remarkable gathering this past weekend in Torrance, Calif., near Los Angeles, some 400 men and women — a carefully chosen representative sample of the state’s registered voters — convened to try to better understand the nature of the problems facing their state and to discuss how state government can address them.

They were old and young, Caucasian, Latino, African-American and Asian-American, a true cross section, coming from as far north as near the Oregon border and as far south as close to Mexico to read up on taxation and the initiative process, to meet in small groups, and to pose questions to experts and government officials.

The event, “What’s Next California?” was sponsored by the California Forward organization and several other non-profit foundations, and was organized by MacNeil/Lehrer Productions, which produces the PBS NewsHour.

Woven in was a “deliberative poll,” which measures voters’ attitudes before and after they are given information on a set of issues. At their first gathering, the co-chair of the event, Lenny Mendonca, told them “never before have groups come together like this … we want the rest of the state to listen to you.”

I was asked to moderate the large plenary sessions, where voters posed questions to experts, and I took the opportunity to sit in on a number of the 25 small groups into which the crowd divided, where they hashed out dense topics of governance: taxation, the realignment of state and local government, and California’s infamous initiative process, which allows citizens to take the lead in changing laws. 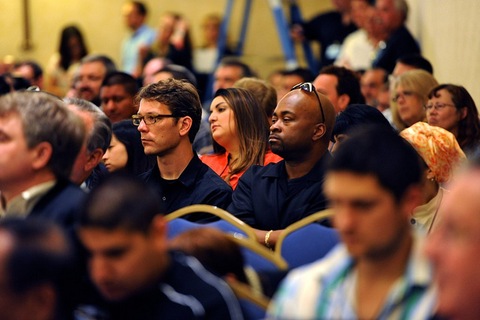 I asked scores of attendees why they had decided to participate, and to a person, they said they love their state and want to do whatever they can to help it fix its problems. On the first evening, one man from Los Angeles told his fellow group members that he loses sleep over the state’s plight: “We used to be number one. I don’t know what happened.”

Another man who moved to California from the southeastern U.S. said “no matter our problems, we’re better off than Alabama.” On the question of the ubiquitous voter initiatives that have become a complex feature of state ballots, one woman said they are “impossible to understand,” and subject to manipulation by whatever group has a lot of money to spend.

Most everyone said they had been skeptical of the first couple of phone calls about the event, expecting an offer to tour vacation property. But once they realized the forum was on the level, they’d determined to attend. Seated around long rectangular tables, many expressed astonishment that each of California’s 40 state senators represents close to one million people; more than the population of a few entire states, and by far the largest of its kind in the nation. One voter said his current state Assemblyman, who represents around 467,000 people, didn’t return his phone calls when he was a San Francisco district supervisor, with only 25,000 constituents, so he hardly expects to have his calls returned now.

There was a spirited discussion over term limits in the state legislature: Assembly members can serve no longer than six years, which many voters realize doesn’t give them time to build up expertise.

The toughest subject was taxes, and especially Proposition 13, the initiative passed in 1978 in a wave of anti-tax fever, placing strict curbs on how much local governments can raise property taxes. In the decades since, all agree the main unintended consequence is that California’s cities and counties, strapped for necessary money for essential services, have had to turn to the state government for funding handouts, giving the state far more say over what happens locally. The result contributes to the dysfunction as the cost of government services rise, and state decision making gets trapped in partisan politics.

After listening to almost two days of Californians talk about how to make their state government work better, the overriding impression was that they want their leaders to work together, to compromise when necessary, to solve problems. This sample of citizens who span the partisan spectrum repeatedly asked questions about finding common ground, especially on tough issues like spending and taxes. It’s clear they don’t understand why their elected representatives can’t work things out.

So, where will their efforts lead? The “What’s Next California?” movement, and the organizations behind it, say they will keep pushing for positive change. Keep an eye on their website for results of the deliberative poll. And find updates on their Facebook page.

And a note: This September, PBS stations in California and elsewhere will air a report by MacNeil/Lehrer Productions on the movement and this weekend’s deliberative poll.