Would focusing on Russia probe help or hurt Democrats in the midterms?

With the 2018 midterm elections just nine months away, Democrats and liberal political groups are weighing how much to focus their message on special counsel Robert Mueller’s Russia investigation, unsure if highlighting the probe will be a winning formula with voters this fall.

The explosive indictments Mueller filed last week, charging 13 Russian nationals and three Kremlin-linked groups with meddling in the 2016 election, signaled the investigation will likely go on for months if not longer — and that it will continue to hang over President Donald Trump’s tenure in office.

The probe is a lingering distraction for Republicans in Congress as well as the president, in a year when the party should be focused on touting its record on taxes, rolling back regulations, and placing Neil Gorsuch on the Supreme Court, among other achievements.

Still, Democrats are debating whether focusing on the alleged collusion between Russia and the Trump campaign is a better strategy than campaigning on issues like the economy and health care.

In a report released last week, the influential liberal Center for American Progress group outlined several potential ways that Democrats could use the investigation and alleged collusion to their advantage this fall.

Democrats are debating whether focusing on the Russia probe is a better strategy than campaigning on issues like the economy and health care.

The CAP report cited several instances in which Russian money may have flowed to the Trump Organization through Trump’s business associates, including the real estate developer Felix Sater. Highlighting those connections could help build the case with voters that Trump can’t disentangle his work as president from his global business empire — an issue critics argue raises questions about corruption and conflicts of interest.

There is “a sense of out-of-control sprawling corruption that goes across a wide number of issues,” Jesse Lee, a senior advisor at the Center for American Progress, said in an interview.

The report describes “the fluidity with which Sater has shifted from real estate to geopolitics” and makes the case that “business relationships can be repurposed as pathways to foreign influence.”

The report laid out a series of policy and legislative recommendations for Democrats to curb foreign powers’ ability to further influence U.S. elections. The report pointed to the DISCLOSE Act, which would ban campaign contributions from American corporations that have at least 20 percent foreign ownership. The bill was first introduced in the House by then-Rep. Chris Van Hollen, D-Md., and in the Senate by Sen. Chuck Schumer, D-N.Y. in 2010. Since then., Sen. Sheldon Whitehouse, D-R.I., has repeatedly introduced the legislation, most recently last July.

“If you pick up the paper or open the internet any given day there’s another cabinet member taking a private plane down the street,” Lee said.

Indeed, many Democrats — including several potential 2020 presidential hopefuls — have already picked up on the themes of corruption and campaign finance reform. 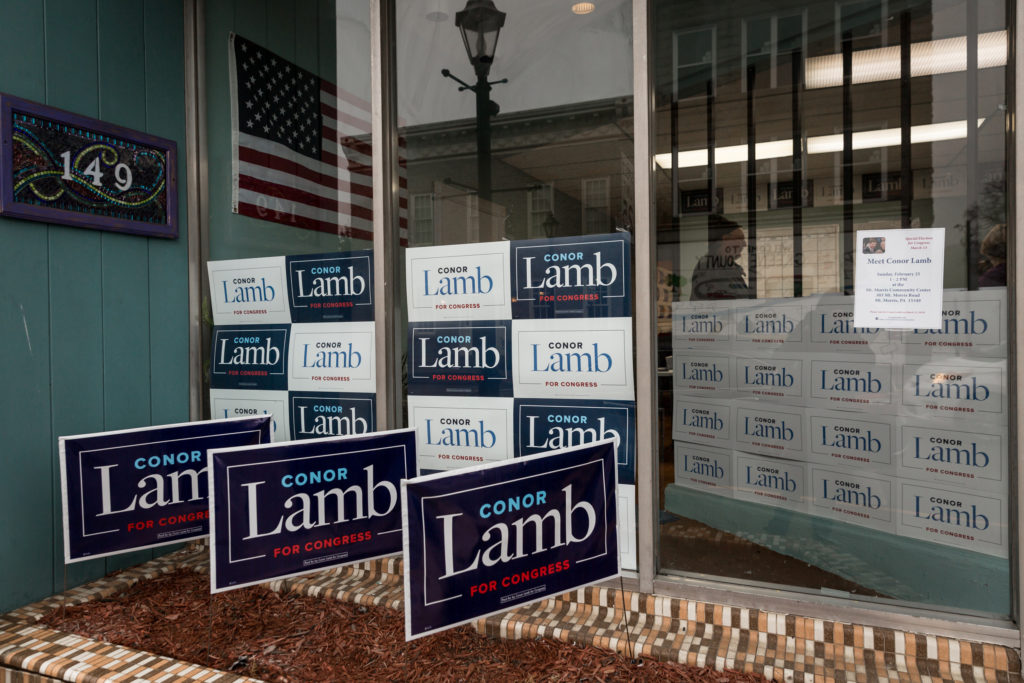 Signs adorn the entrance to Democratic Congressional candidate Conor Lamb’s headquarters in Waynesburg, Pennsylvania, on Feb. 14, 2018. The special election in Pennsylvania next month will be an early test of the Democrats’ messaging ahead of the midterms this fall. Photo by REUTERS/Maranie Staab

Last week, Sen. Kirsten Gillibrand, D-N.Y. announced that she would no longer accept campaign contributions from political action committees, and Sen. Cory Booker D-N.J., quickly pledged to do the same. Sens. Bernie Sanders, I-Vt., and Elizabeth Warren, D-Mass., two other rumored 2020 candidates, had both previously announced they would decline PAC money, seen by many on the left as a symbol of the corrupting influence of money in politics.

The moves suggest Democrats see a benefit in running reform-minded campaigns that serve as a contrast to Trump’s alleged dealings with Russia. Warren, for example, has given several speeches in the past year connecting the role of money in politics with unfair business practices and corruption among the one percent, including Trump.

At the same time, some liberal groups see a danger in Democrats focusing too much of their 2018 messaging on the Russia probe, its ties to the Trump campaign, and issues like corruption in politics.

Priorities USA, another prominent left-leaning group, put out a memo last week arguing that Democrats should stick to an economic and health care-centric message in the months heading into the midterms.

“When voters hear the Democratic argument on health care or on taxes and then hear the Republican side, they side with Democrats,” Priorities USA Communications Director Josh Schwerin said.

The group wrote in its memo that its internal polling shows Trump’s approval rating climbed four points since November, from 40 percent to 44 percent. However, specific policies, like the tax law Trump signed late last year, and the GOP’s repeated attempts to repeal the Affordable Care Act, remain unpopular, the polling shows.

The tax law could be a “political liability” for Republicans in the midterms, said Tyler Law, a spokesman for the Democratic Congressional Campaign Committee. “The American people know they were sold out in this tax bill, and the backlash against establishment Republicans is growing stronger every day,” Law said.

Conservatives argued that voters would view the Democrats’ attacks on the tax law and their focus on the Russia probe as proof that the party doesn’t have a clear message. “Democrats have nothing to message on going into the midterm elections,” said Rachael Slobodien, a spokesperson for the conservative Club for Growth.

With primary season just beginning in the coming weeks, Democrats have a few more months to settle on a message before candidates start campaigning full tilt. Finding the right balance between focusing on issues and highlighting the Russia probe will be tricky, said Lee of the Center for American Progress.

Mueller’s Russia investigation will likely still be in the headlines this fall, but it won’t be the deciding factor in the elections, he added. Democrats would be making a mistake by “banking on a slew of indictments to win the midterms,” Lee said.