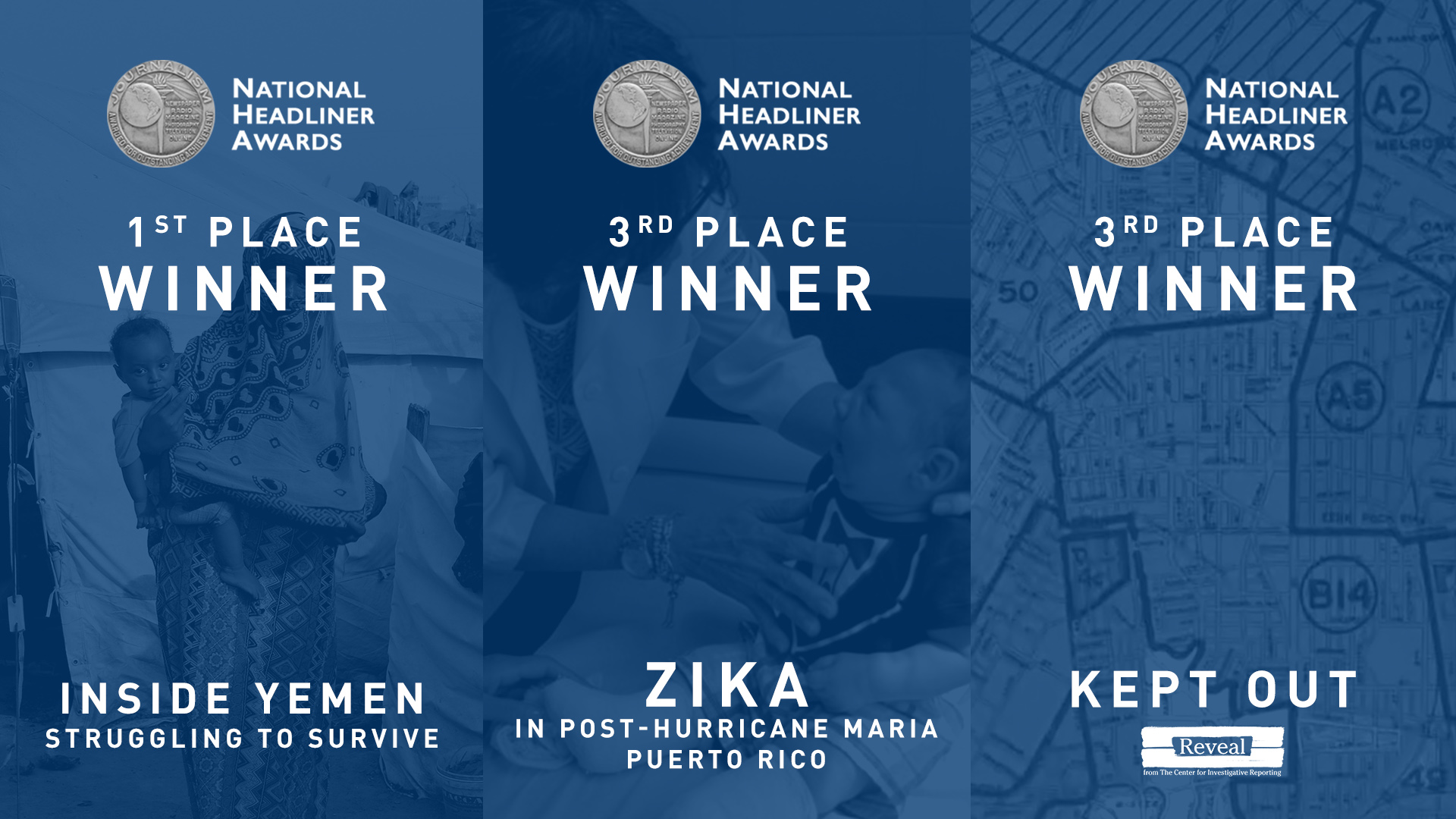 ARLINGTON, VA (April 19, 2019) — PBS NewsHour today received three National Headliner awards for its 2018 reporting on the brutal civil war in Yemen, the Zika epidemic in Puerto Rico after Hurricane Maria and racial discrimination in home lending. The Headliner Awards were created by the Press Club of Atlantic City in 1934.

“Inside Yemen: Struggling to Survive” received first place for continuing broadcast coverage of a major news event. In the segment, PBS NewsHour special correspondent Marcia Biggs examined the brutal civil war in Yemen; shining a spotlight on what the United Nations has called the world’s largest humanitarian crisis. In March 2018, Biggs and videographer Javier Manzano — with the support of the Pulitzer Center on Crisis Reporting — examined efforts by the United Arab Emirates, part of the Saudi-led coalition fighting Iran-aligned Houthis, to control Aden and parts of southern Yemen on behalf of Yemen’s government. That control extended to secret prison facilities where desperate family members waited outside the gates to find out the fates of their loved ones. A top Yemeni official all but admitted to Biggs his country was occupied, a comment which made news across the Middle East.

In November 2018, the PBS NewsHour — in partnership with the GroundTruth Project and Reveal from the Center for Investigative Reporting — discovered that after Hurricane Maria crippled Puerto Rico, the island’s health department failed to provide adequate Zika testing and misrepresented its Zika infection number to the Centers for Disease Control and Prevention. Special correspondent Beth Murphy found that Zika — a mosquito-borne illness that causes fever and birth defects — was as severe on the island in 2018 as it was in 2016 when the virus was at its height. The report received third place for health and science coverage.

“Kept Out” — a PBS NewsHour and Reveal investigative reporting partnership — received third place for business and consumer reporting. The two-part series found that in 61 cities across America people of color were more likely to be turned down for a home-related loan, even when they made the same amount of money and wanted to buy in the same neighborhood as their white counterparts. NewsHour’s reports, which aired in February 2018, focused on loans for individuals in Philadelphia and was based on a year-long analysis of 31 million mortgage records.