Elephants don’t eat peanuts, and 10 other things you should know about the pachyderms

Monday on The PBS NewsHour, Jeffrey Brown visits baby elephants in Kenya orphaned by the illegal ivory trade. The African elephant population has been dwindling rapidly over the past decade as the demand for ivory in countries like China has increased. The world’s largest land mammals are in danger of extinction, conservationists report.

Humans have lived and worked with elephants for centuries, but recent research reveals how incredibly complex — and threatened — these animals are. Here are ten things you should know about elephants:

1. The world could lose a fifth of its African elephant population in 10 years. The African elephant population has dropped drastically since the 1970s. Then, there were an estimated 1.6 million elephants in Africa, according to the Association of Zoos and Aquariums. A survey in 2007 found that there were between 470,000 and 690,000 wild elephants left in Africa, but some researchers believe the real number is much lower, closer to 250,000. 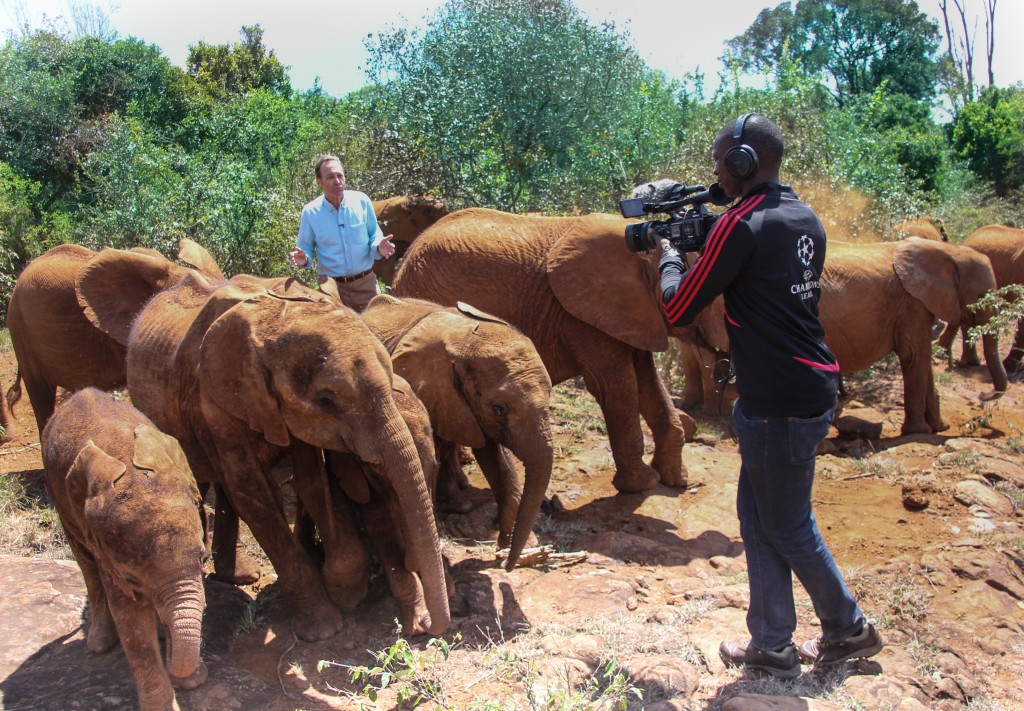 Jeffrey Brown traveled to Kenya as part of a reporting trip that includes a visit to the David Sheldrick Wildlife Trust. Watch his report on Monday. Photo by Molly Raskin

2. Despite an international ban on new ivory sales in 1989, elephant poaching has escalated since 2007. An increasing demand for ivory in China has led to a drastic decline in the African elephant population. Ivory can sell for as much as $1,500 a pound on the black market. Paul G. Allen, head of the Elephants Without Borders population survey, estimates 96 elephants died every day last year. A recent study published in the Proceedings of the National Academy of Sciences found that since 2010, Africa has lost about 35,000 elephants each year, and at the current poaching rate, more elephants are killed each year than are born. 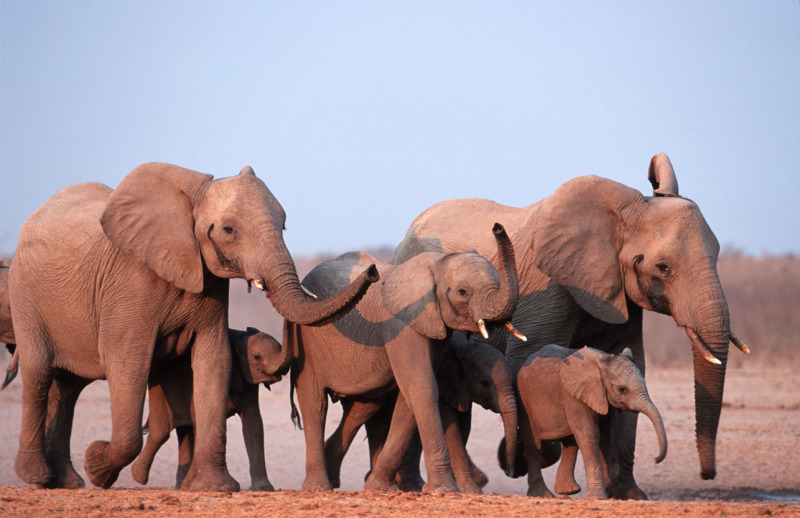 3. It’s true that elephants never forget. Elephants can remember the locations of watering holes hundreds of miles apart, and return to them every year. Their brains are very advanced, like humans, dolphins and chimpanzees. Elephants can recognize themselves in a mirror and even use tools. They can break sticks into switches to swat flies and use chewed up bark to plug up drinking holes. In one experiment, Asian elephants at Smithsonian’s National Zoo learned to use step-stools to reach food hidden in trees:

4. Elephants also cooperate. In another experiment in Thailand, scientists devised a system of ropes, which, if operated correctly, pulled a tray of food under a net. Elephants quickly learned they needed to wait for a partner to get what they wanted:

5. Elephants mourn their dead. The pachyderms display very complicated emotions, including grief. Elephant herds are made of strong family and social bonds. They have been known to comfort other elephants in distress, stroking each others’ heads with their trunks. When one of their own dies, they cry and will stay beside the body for days. Elephants will mourn over carcasses of unrelated elephants too, stroking the bones with their trunks and laying dirt or leaves over the bodies. 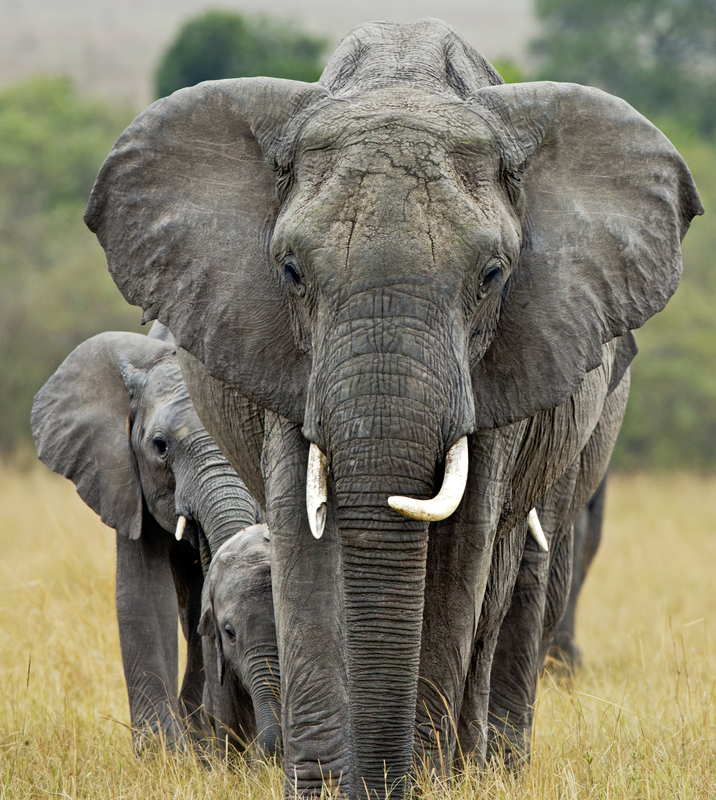 6. They get Post-Traumatic Stress Disorder. Research finds that elephants respond to abuse, captivity and other trauma much like humans. Orphaned baby elephants will have trouble sleeping, and they wake up with night terrors.

7. Humans can’t hear most elephant sounds. Elephants have an amazing 4-octave vocal range, with frequencies stretching between rumbles at 27 Hz to roars at 470 Hz. (For reference, a man’s voice is typically 110 Hz.) Elephants can produce sounds at 112 decibels, which is louder than a construction site. But their rumbles are two octaves below human hearing. These rumbles are called infrasounds, and they are produced in the same way a cat purrs or the way a human sings. The vibrations travel through the ground, letting elephants communicate between great distances — up to 50 miles according to nature documentarian James Honeyborne — and they even recognize other elephants’ voices.

8. Elephants have been used for centuries in war, entertainment and execution. Elephants’ intelligence makes them trainable. Many circus-goers have seen the massive mammals trained to stand on their hind legs and perform other tricks. But in the ancient world, elephants were frequently used in combat, trained to carry soldiers and break through enemy lines. Their military career extended to the Second World War, when they were used in Burma to rescue 64 Ghurka women and children from the Japanese. Elephants were also used as executioners in India, Sri Lanka and Thailand until the 18th and 19th century, crushing and dismembering prisoners. Two captive elephants have been publicly executed for killing people. Topsy, a Barnum and Bailey circus elephant that killed a spectator in Brooklyn, New York, was sentenced to public execution by the circus owners in 1903. Thomas Edison built the contraption to electrocute her. In September 1916, a circus elephant named Mary died by hanging with an industrial crane in a public execution in Erwin, Tennessee. 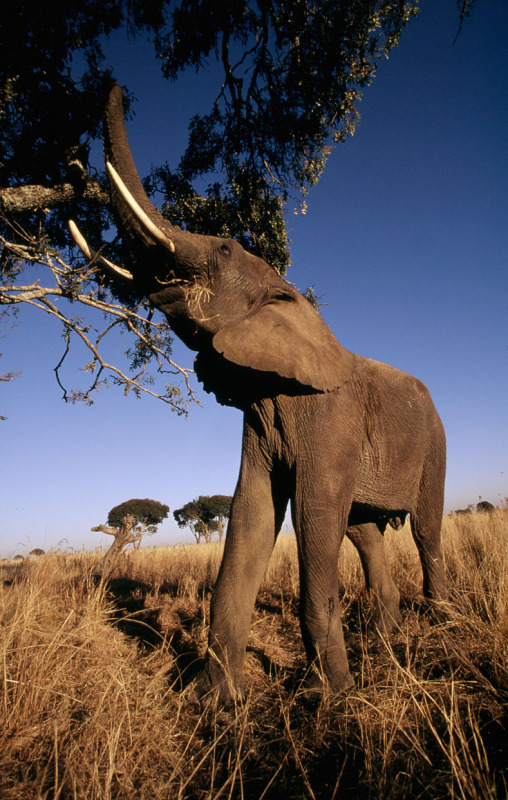 An African elephant reaches up to feed on tree branches in Africa. Photo by © Martin Harvey/WWF-Canon

9. Even with a thick skin, elephants can get sunburns. To protect themselves, elephants coat themselves with dirt and mud. Mud also helps keep bugs away.

10. Some pachyderms are being trained to curb the conflict between humans and wild elephants. As elephants in Asia lose their habitat to farming and development, they have been known to raid farmers’ fields for an easy meal, destroying crops and property. The World Wildlife Fund has trained the Flying Squad — four female elephants and eight handlers — in Indonesia’s Tesso Nilo National Park to usher wild elephants away farmland and back to the forests.