NEW ORLEANS — Ten years after an oil rig explosion killed 11 workers and unleashed an environmental nightmare in the Gulf of Mexico, companies are drilling in deeper and deeper waters, where payoffs can be huge but risks are greater than ever.

Industry leaders and government officials say they’re determined to prevent a repeat of BP’s Deepwater Horizon disaster, which spilled 134 million gallons of oil that fouled beaches from Louisiana to Florida, killed hundreds of thousands of marine animals, and devastated the tourist economy.

Yet safety rules adopted in the spill’s aftermath have been eased as part of President Donald Trump’s drive to boost U.S. oil production. And government data reviewed by the Associated Press shows the number of safety inspection visits has declined in recent years, although officials say checks of electronic records, safety systems and individual oil rig components have increased.

Today, companies are increasingly reliant on production from deeper and inherently more dangerous oil reserves, where drill crews can grapple with ultra-high pressures and oil temperatures that can top 350 degrees (177 degrees Celsius).

Despite almost $2 billion spent by the industry on equipment to respond to an oil well blowout like BP’s, some scientists, former government officials and environmentalists say safety practices appear to be eroding.

“I’m concerned that in the industry the lessons aren’t fully learned — that we’re tending to backslide,” said Donald Boesch, a University of Maryland professor who was on a federal commission that found the BP blowout was preventable.

After the spill, oil giants created the Marine Well Containment Co., which has equipment and vessels ready to respond if another major spill occurs.

“All of industry wanted to make sure that nothing like it could ever happen again,” said company CEO David Nickerson at the company’s complex, near Corpus Christi on the Texas coast. 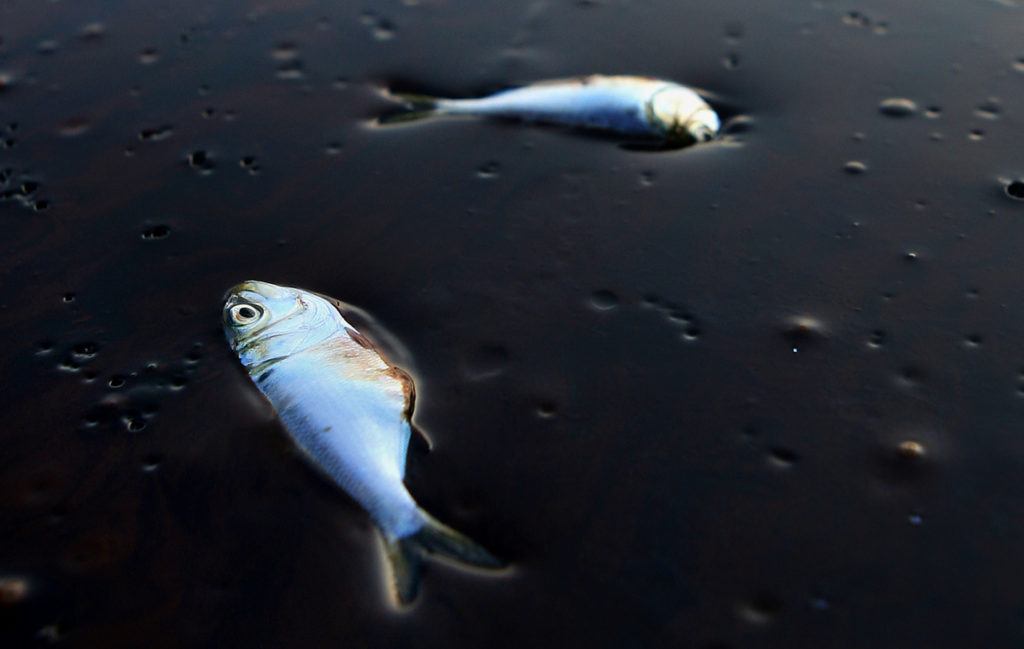 Poggy fish lie dead stuck in oil in Bay Jimmy near Port Sulpher, Louisiana June 20, 2010. The BP oil spill has been called one of the largest environmental disasters in American history. Photo by Sean Gardner/Reuters.

Industry leaders say the administration’s rule changes allow companies to deviate from “one-size-fits-all” standards not always suited to water pressure and other conditions at individual wells.

Companies also have a financial interest in avoiding a repeat of an accident that has cost BP more than $69 billion in cleanup expenses, fines, fees and legal settlements.

The rule changes under Trump, including less frequent safety tests, are projected to save energy companies $1.67 billion over a decade.

An AP review found inspection visits by the U.S. Bureau of Safety and Environmental Enforcement — created in the 2010 disaster’s aftermath — went down more than 20% over the past six years in the Gulf.

Bureau spokesman Sandy Day said government inspection data AP gathered reflects visits by inspectors to rigs, platforms and other facilities. But Day said the data doesn’t show electronic records reviewed remotely or the increased time spent at each facility and all the inspection tasks performed. Those, he said, have increased from 9,287 in 2017 to 12,489 last year.

“While on the facility we did numerous inspections of different items,” Day said, including equipment meant to prevent major accidents. He added that electronic records allow more work to be done from shore, rather than on site.

Industry advocates say the drop reflects greater emphasis on complex systems that influence safety and note that there are fewer, if much bigger, active oil platforms.

As wells close to shore run dry, the average drilling depth in deeper waters steadily increased, from about 3,500 feet (1,070 meters) beneath the surface in 1999 to more than 4,600 feet (1,400 meters) in 2019, according to AP analysis of data from the U.S. Interior Department’s Bureau of Ocean Energy Management.

Drilling deeper makes well sites harder to reach in a blowout or other accident.

In the past year, the industry began producing crude from ultra-high pressure reserves in the Gulf, where well pressures can top 20,000 pounds per square inch, much more than Deepwater Horizon. 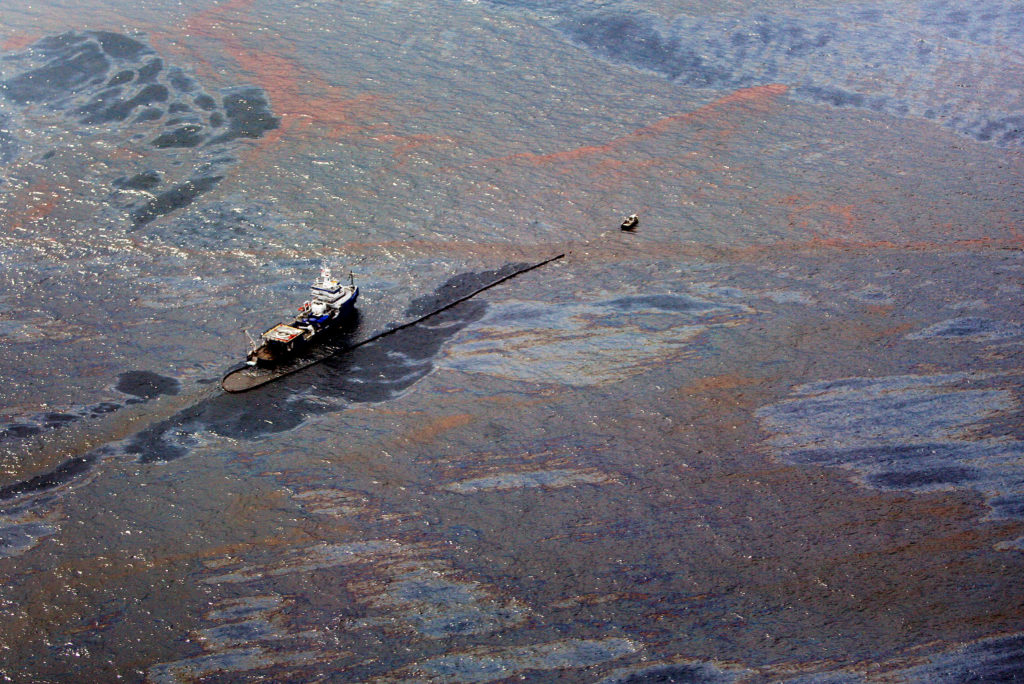 Oil floats on the surface of the Gulf of Mexico around a work boat at the site of the Deepwater Horizon oil spill in the Gulf of Mexico June 2, 2010. As the desperate effort to contain the gusher proceeded, the slick stretched farther. Tar balls and other oil debris from the giant, fragmented slick reached Alabama’s Dauphin Island, parts of Mississippi and were less than 16 km (10 miles) from Florida’s northwest Panhandle coast. Photo by Sean Gardner/Reuters.

The safety debate has recently centered on rules for keeping wells under control, such as requirements for blowout preventers that failed in the Gulf spill.

Under Obama, companies were required to test devices every 14 days. The Trump administration allowed companies upon approval to test every 21 days, saying more frequent testing would risk equipment failure under extreme conditions.

Inspection visits by the government’s safety bureau fell from 4,712 in 2013 to 3,717 in 2019, according to data reviewed by AP. The decline coincided with increased focus on higher risk facilities, including those with historical problems.

Warnings and citations to companies for safety or environmental violations peaked in 2012 and have since fallen faster than inspection visits. The decline accelerated under the current administration.

Fewer inspections and citations suggests safety improvements after the spill are unraveling, said Matt Lee-Ashley, formerly of the Interior Department.

“There’s got to be an emphasis on your more significant potential incidents, potential blowouts,” Milito said.

Even if companies are prepared for another Deepwater Horizon, they could be overwhelmed by other types of incidents, such as of one of the Gulf’s frequent underwater mudslides wiping out a cluster of wellheads on the seafloor, said Florida State University oceanographer Ian MacDonald.

That could leave the blowout source buried under hundreds of feet of muddy debris, said MacDonald.

“Absent really extraordinary intervention and brand new engineering technology being built as you fly along, you’re not going to stop it,” he said.