100 years of Mount Wilson’s 100-inch telescope, the first to discover the universe

In its heyday, California’s 100-inch telescope brought space into clear focus. It was one of astronomer George Ellery Hale’s four attempts at building the world’s largest telescope during the early 20th century. Among his giants, the 100-inch is best known for being the first to see beyond our Milky Way galaxy. That’s right, it spotted the universe!

Wednesday, the 100-inch telescope turns 100 years old and scientists, supporters and Mount Wilson Observatory staff will celebrate its achievements. Three days later, the public will get to use the telescope and listen to talks about the 100-inch’s rich history by famed astronomer Alex Filippenko and George Hale’s grandson Sam Hale.

“My grandfather helped create modern astronomy, astrophysics and cosmology, and this telescope was a part of his legacy to the world,” said Hale, CEO and board chairman of the nonprofit Mount Wilson Institute.

Perched atop California’s Mount Wilson, the 100-inch reflecting telescope took “first light” on the night of Nov. 1, 1917. The name “100-inch” isn’t the size of the entire telescope. It refers to the diameter of the telescope’s mirror at the base of its blue scaffold-like tube. The entire structure, with the dome moving cogs and all, weighs about a million pounds.

The telescope originally didn’t have an eyepiece to look through, so astronomers didn’t “see” starlight when it was in use. It was more like a giant camera on a tripod. Scientists stood beside the setup, clicked a few buttons and took snapshots of celestial bodies.

“My grandfather was always looking to build the next big thing,” Hale said. “One begets another, and the 100-inch was his third innovative telescope that gave us a great view of the universe at that time.”

The telescope remained the world’s largest until 1949 but was only active for about 40 years of its lifetime. In its early days, astronomers from around the world flocked to Mount Wilson Observatory to use the telescope and its predecessor, the 60-inch telescope. One of the most notable astronomers to work at the observatory was Edwin Hubble (the namesake of the modern Hubble Space Telescope).

Hubble joined the observatory in 1919 and began classifying nebulae, gaseous space clouds, as “galactic” and “non-galactic.” Because the 100-inch was the first telescope large enough to differentiate individual stars from one another, Hubble used a type of pulsating star–Cepheid variables–to measure astronomical distances. These stars change in brightness periodically (usually up to 50 days), which astronomers can use to determine their “true brightness.” Comparing their “apparent brightness” to their true brightness helps astronomers calculate star distances. 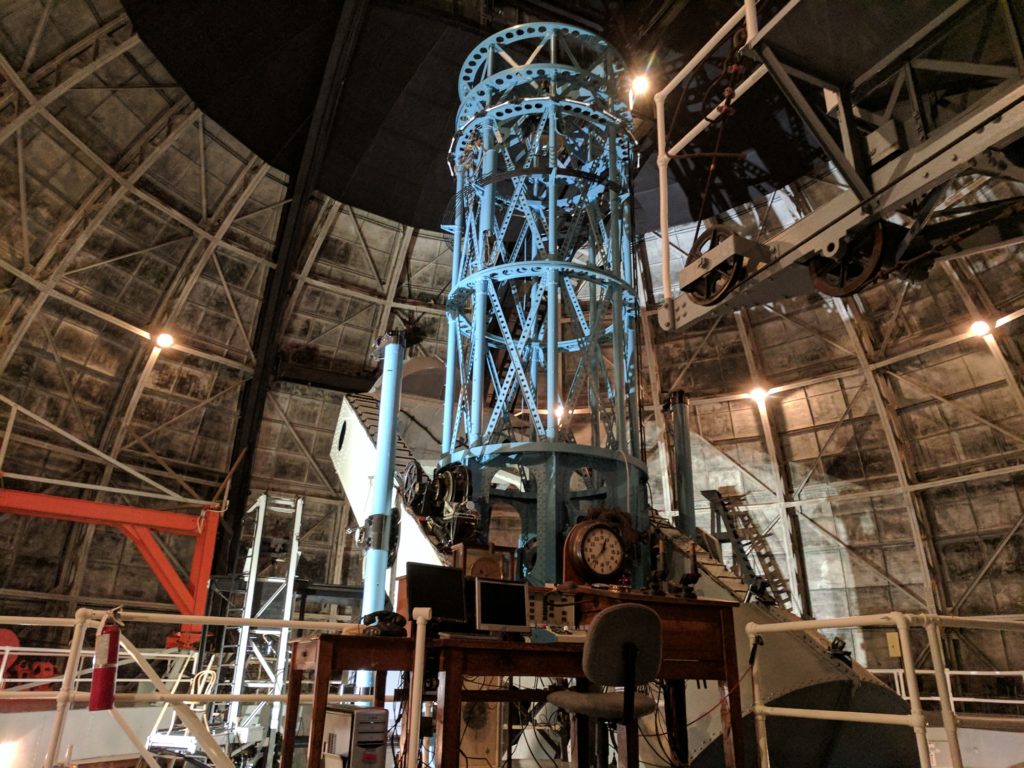 The 100-inch telescope and its moving parts weigh about one million pounds. Photo by Dan Kohne

Using this method, Hubble discovered that galactic nebulae were not actually gas clouds but gigantic, extremely distant bodies filled with billions of stars. He soon realized there was a “universe” filled with these galaxies.

From 1929 to 1936, Hubble and his colleague Milton Humason measured the spectra–a band of color from a range of light waves–of nearly 140 galaxies primarily using the 100-inch. Together, they noticed galaxies leaned toward the red side of the spectrum and were gradually moving farther away. For the first time, astronomers had evidence of a proposed theory: The universe is expanding. Hubble and Humason also believed galaxies were much closer than they were and calculated the age of the universe at around 7 billion years old…but they were quite wrong.

A few years later, astronomer Walter Baade attempted to verify Hubble and Humason’s findings with the 100-inch telescope. Baade discovered another kind of Cepheid variable star from the one Hubble used to spot galaxies. Bade reviewed Hubble’s work, checking for the new class of pulsating stars and correcting for errors. He soon landed the true age of the universe: approximately 14 billion years old.

“This was the foundation of astrophysics, and it inspired more astronomers to make notable contributions to the field using the 100-inch and other instruments at Mount Wilson Observatory,” said Tom Meneghini, executive director of the Mount Wilson Institute. 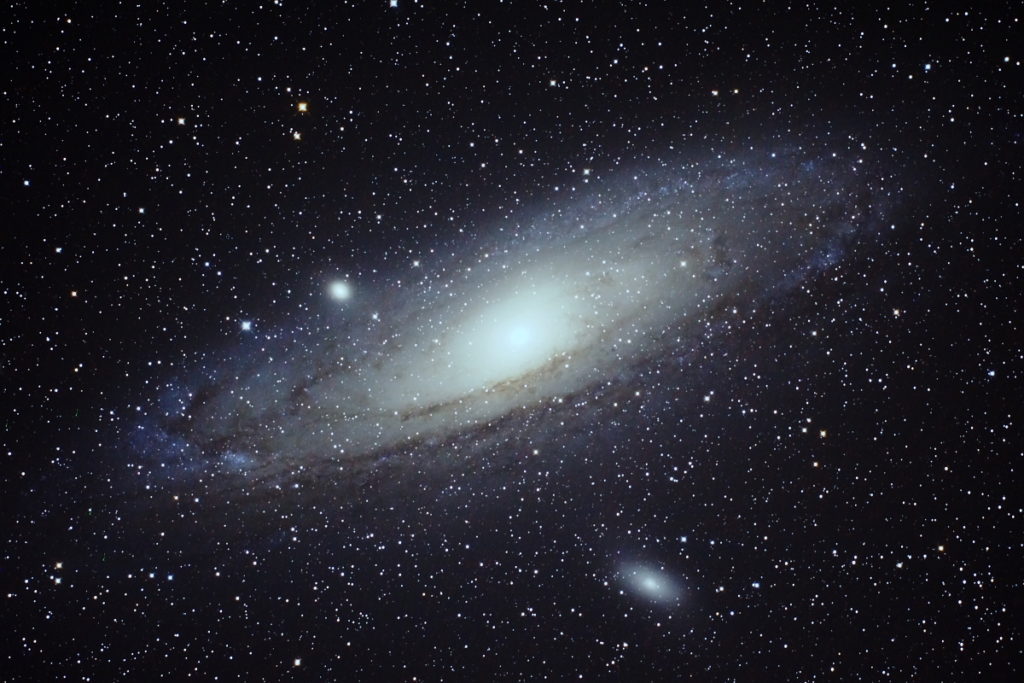 Around that same period, new technologies were developed to make the 100-inch even more powerful. Astronomers Albert Michelson and Francis Pease developed the 20-foot interferometer, an instrument that measured diameters of stars and precise distances between binary stars, which was placed on top of the telescope. With this device, Michelson, Pease and their colleagues determined the diameter of Betelgeuse, the red supergiant star found in the constellation Orion.

Since then and well into the 1950s, astronomers Seth Nicholson and Edison Pettit unveiled a new type of astronomy at the observatory–infrared astronomy. Earth’s atmosphere naturally emits invisible infrared light, which muddies our attempts to find it radiating elsewhere in the universe. Since we didn’t have the means to send a telescope to space back then, Nicholson and Pettit solved this issue by using a device called a thermocouple on the 100-inch. The device was placed in front of the telescope mirror to gather electrical information from starlight and translated the voltage into temperature. The 100-inch became the first instrument to “view” infrared, which still allows astronomers to reveal the hidden inner workings of stars and planets. 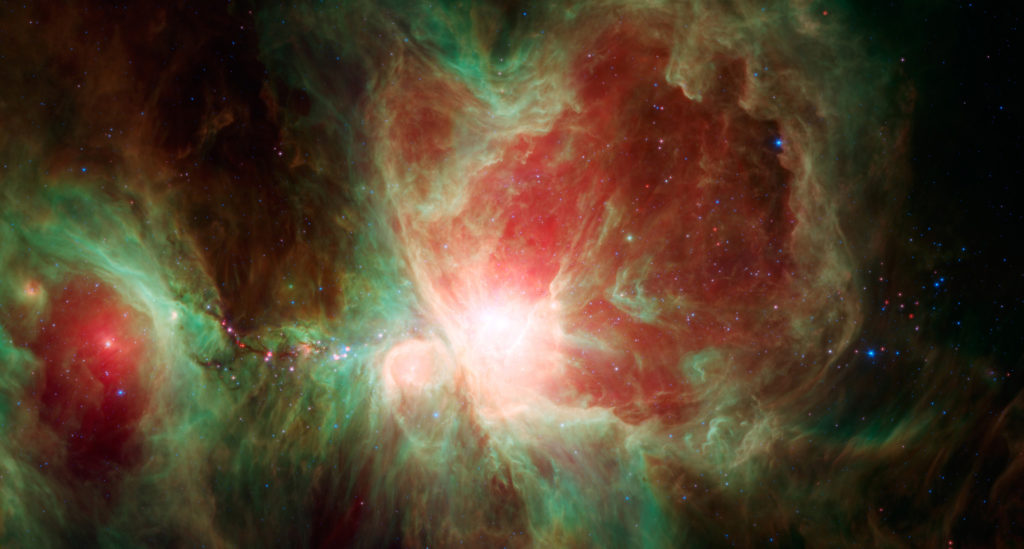 Images in infrared provide astronomers with new information that would normally not be seen with the naked eye. Photo by Reuters

But even with all this success, the 100-inch telescope went out of commission a couple times. During the 1980s and 1990s, it couldn’t compete with behemoth telescopes housing 200-inch mirrors or larger, such as the Keck 1 and 2 telescopes in Mauna Kea, Hawaii. These newer telescopes sit in the darkest corners of the globe to avoid light pollution–a persistent problem generated by the 100-inch’s luminous neighbor, Los Angeles.

The age of deep-space observation was beginning, and the 100-inch was no longer at the forefront of astronomical technology. So, the scientific demand for the telescope waned and revenue streams reduced to a trickle, Meneghini said.

But by 2014, the Mount Wilson Institute helped the 100-inch take light again. The institute converted the telescope into a visual observing station, where visitors can see stars by peering through an eyepiece. What was once a historical relic now allows people to view the cosmos as world-class astronomers once did.

Now, the observatory seeks collaboration with other institutions to rekindle more scientific observation on the scope and promote STEM education opportunities for young astronomers. In July 2016, Mount Wilson Observatory used the 100-inch to take pictures of Jupiter during the Juno mission. The observatory expects more Juno spacecraft observations within the next year. NASA’s Jet Propulsion Laboratory and the observatory are interested in sponsoring local colleges and universities to get undergraduates using the telescope.

With these opportunities in the works, Meneghini hopes “to bring the 100-inch back to life,” he said. “The work of tomorrow’s astronomers is our springboard into another century and to get the telescope doing science again.”

Left: The 100-inch telescope celebrates its 100th birthday on November 1. Photo by the Huntington Library in San Marino, California