While arsenic is an ancient health threat, this analysis offers one of the first nationwide appraisals for the groundwater contaminant and spotlights regulatory gaps in the nation’s water infrastructure. 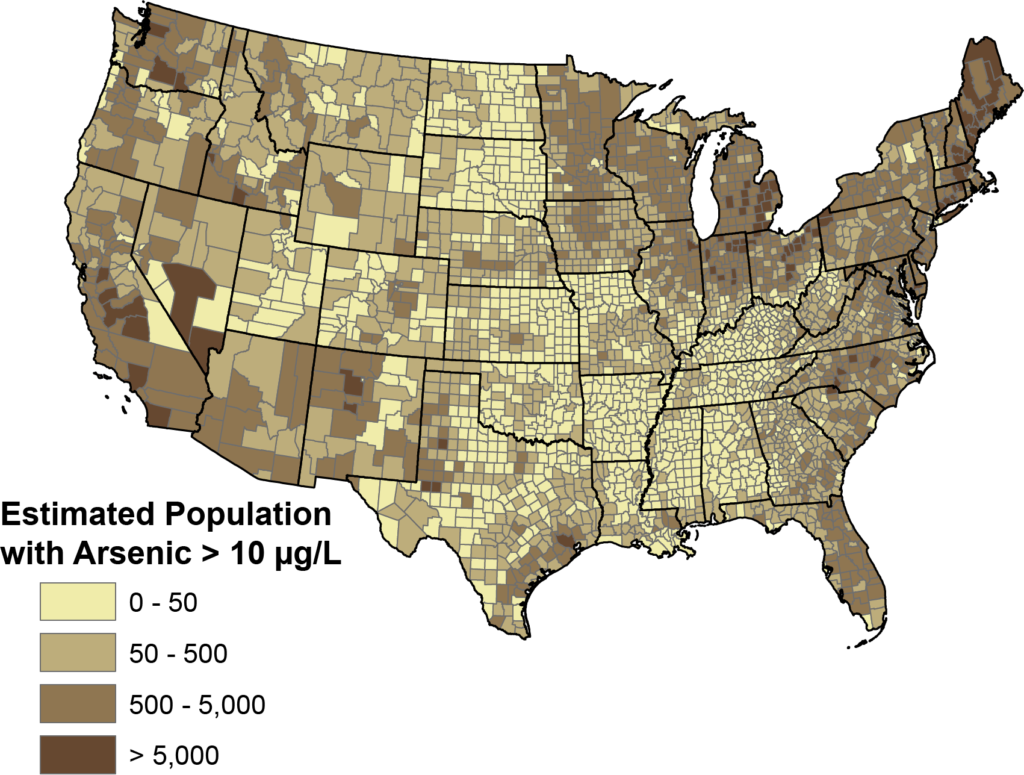 This map shows the number of wells on a county level that are likely contaminated with high levels of arsenic. Map courtesy of Joseph Ayotte

What the scientists did: USGS hydrologist Joseph Ayotte said the Centers for Disease Control and Prevention asked him and his colleagues to look into the burden of arsenic exposure in domestic water wells because of the chemical’s adverse health outcomes and the known blindspots in arsenic monitoring.

Many states keep tabs on arsenic in water wells, but normally in places where the chemical is already known to be a problem. Other times, the state records are kept infrequently.

Arsenic is one of the most common metals on the planet, and its presence can largely be predicted in advance if you know the chemistry of the rocks in any given place. Rain patterns and how water flows through these rocks can release arsenic from their earthen homes and into a water well.

So Ayotte’s team cross-referenced these variables with 20,000 actual measurements of arsenic in private domestic wells across the U.S. to build a computer model that guesses at where arsenic might exist. 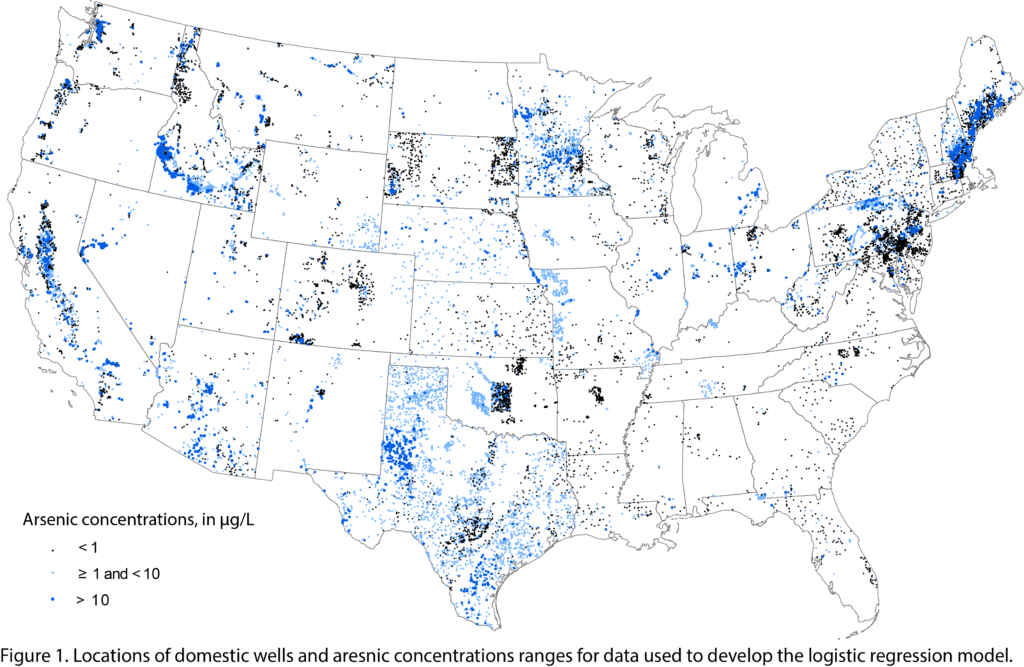 Ayotte’s team used USGS and other databases to compile arsenic measurements from 20,450 wells in the U.S. Map courtesy of Joseph Ayotte

What they found: The USGS model, published in Environmental Science & Technology, predicts 2.1 million people drink from wells with arsenic at greater than 10 micrograms per liter of water, which is the maximum contaminant level allowed by the Environmental Protection Agency. Overall, 44.1 million in the conterminous U.S. rely on wells for their water.

“I wish I knew why U.S. domestic well water quality is not regulated to meet the same drinking water standards as for other types of water supplies.”

The team also mapped out hot spots for arsenic contamination across the country, which provides an estimate for the probability of finding arsenic in places where no one had collected data said Yan Zheng, a research scientist with the Southern University of Science and Technology in China and the Lamont-Doherty Earth Observatory of Columbia University in New York.

States like Maine, New Hampshire and Massachusetts registered high levels of arsenic on the map. This is because private wells are usually drilled into hard crystalline bedrock with fractures, Ayotte said. 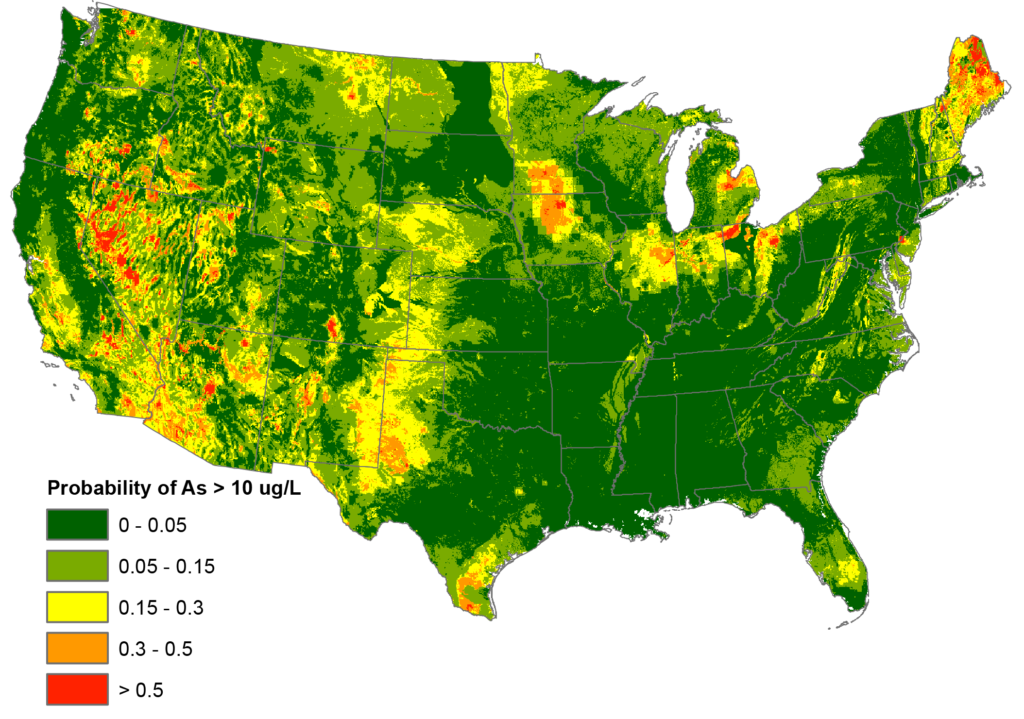 The likelihoods of a high amount of arsenic (greater than 10 micrograms per liter) in well water are presented in green (low probability) and red (probability more than 50 percent). Map courtesy of Joseph Ayotte

Water can move through those fractures, and when it comes into contact with minerals that contain arsenic, the liquid can dissolve the contaminant into the water supply. High humidity drives arsenic levels in the Northeast too. Out in the Southwest, factors such as lots of evaporation and highly reactive compounds in the rocks concentrate arsenic in the water supply.

Why it matters: One recent investigation found that 63 million Americans lack access to clean water, while the price of drinking water is becoming unaffordable for more and more people. The new model is helpful, Zheng said, because very few U.S. states have any regulations on arsenic in water wells and the federal government does not monitor the problem on a national scale. Private well owners are left to track arsenic levels on their own.

“I wish I knew why U.S. domestic well water quality is not regulated to meet the same drinking water standards as for other types of water supplies,” said Zheng, who has conducted regional studies of arsenic in water wells in the U.S., China and Bangladesh, where she was formerly a water and sanitation specialist with UNICEF on arsenic mitigation projects.

Her research leads her to believe the most effective way to reduce arsenic exposure and protect human health is a national screening program in the form of individual tests at domestic wells.

That’s one of the shortcomings of Ayotte’s study. It offers a sense of where arsenic might be, but people will not know for sure if their wells are contaminated unless they test.

Once detected, arsenic can be removed through common water filters, but even this simple technological fix might be cost prohibitive in rural areas where water wells dominate. Another option is to build extensive water utility systems for rural areas, akin to those in South Dakota, but that’s pricey too. Both the Trump administration and Congressional Democrats have put forth infrastructure bills to improve water access.

Left: A new USGS model predicts 2.1 million people drink from wells with arsenic at greater than 10 micrograms per liter of water, which is the maximum contaminant level allowed by the Environmental Protection Agency. Photo by Lucy Nicholson/REUTERS