2 devastating earthquakes have hit Mexico in as many weeks. Here’s why

What happened? The U.S. Geological Survey said a magnitude 7.1 quake struck near the town of Raboso in Puebla, approximately 76 miles southeast of Mexico City, at a depth of 31 miles. This USGS reading is preliminary, but Mexico’s National Seismological Service released similar numbers for the earthquake’s strength.

A USGS official told the Associated Press that Tuesday’s earthquake was not an aftershock of the disaster that struck near Chiapas on Sept. 8, due to the large distance between the two events. 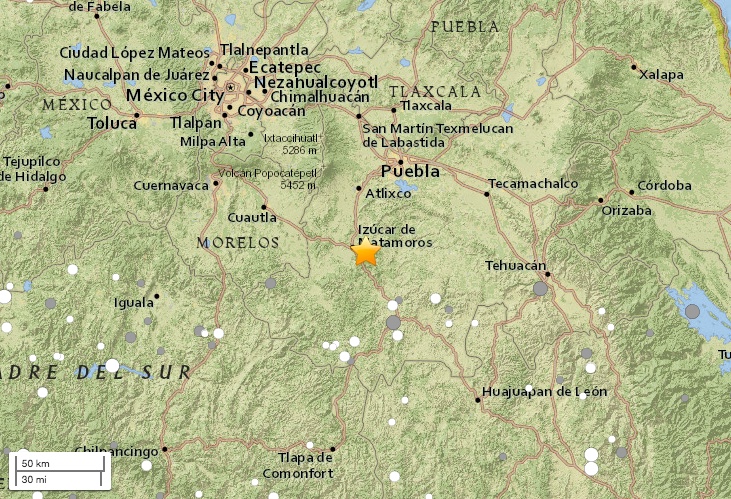 Map of the epicenter (star) of a magnitude 7.1 earthquake that hit near the town of Raboso in Puebla, Mexico. Map by U.S. Geological Survey

Damage report: By Wednesday morning, 225 people had died from the earthquake, according to Luis Felipe Puente, the coordinator of Mexico’s national Civil Defense Agency.

Mexico City reported a death toll of at least 94, while in Morelos, a state in central Mexico, 71 people died. Puebla, where the quake hit, reported 43 deaths. Twelve more deaths were reported in Mexico State, which borders Mexico City, four in Guerrero and one was recorded in Oaxaca.

Mexico City Mayor Miguel Angel Mancera said at least 20 buildings, including a school had collapsed, with reports of people being trapped inside.

Social media posts from Mexico City show cracked facades and toppled buildings in populated areas, as locals fill the streets. Gerardo Lazos, a journalist with Patito Television, filmed his home in Mexico City shaking during the quake. But the event likely caused devastation throughout much of central Mexico.

Police, emergency officials and citizens continued to dig through the night, under flood lights, for survivors.

Emergency workers now carrying people out on stretchers while others pass buckets in to carry out rubble from downed buildings pic.twitter.com/eF7EiGL9wW

From a friend in DF. pic.twitter.com/oSqQ0f5P4C

Why so many quakes in Mexico? Mexico is part of the Ring of Fire, the rim where the tectonic plates of the Pacific Basin jam into those propping up North America, South America and Asia. The Ring of Fire accounts f or 90 percent of the planet’s earthquakes.

But Mexico is especially seismic because it sits on three giant tectonic plates. Moreover, the nearby oceanic crust — the Cocos plate — is denser than the landmass carrying the central portion of the country. As the two plates collide, Mexico’s softer earth crumples, which explains why mountain ranges line the eastern part of the nation.

The Chiapas earthquake in early September also struck an area that seismologists have been watching closely for several years, as Lizzie Wade explained in Science Magazine:

The epicenter of the quake, which struck just before midnight local time, was just southeast of the Tehuantepec gap, a 125-kilometer-long stretch of Mexico’s Pacific coast that has been seismically silent since record-keeping began more than a century ago. All along that coast, the ocean’s tectonic plates meet the continental North American plate and are forced underneath it. Violent earthquakes mark the release of built-up pressure between the grinding plates. But the ruptures have somehow avoided the Tehuantepec gap and the Guerrero gap, more than 500 kilometers to the northwest.