I have been on the science beat for more than 20 years now. And during that time I have been consistently reminded of one memorable cartoon series. I’m talking about “The Jetsons,” which premiered in prime time in 1962.

Nearly every piece of new consumer technology I encounter in my reporting travels leads to a comparison to the animated series; whether it’s the flying car, the jet pack or Rosie the robot maid. Usually the real-world technology falls short of the Jetsonian vision, and the comparison is laced with disappointment. 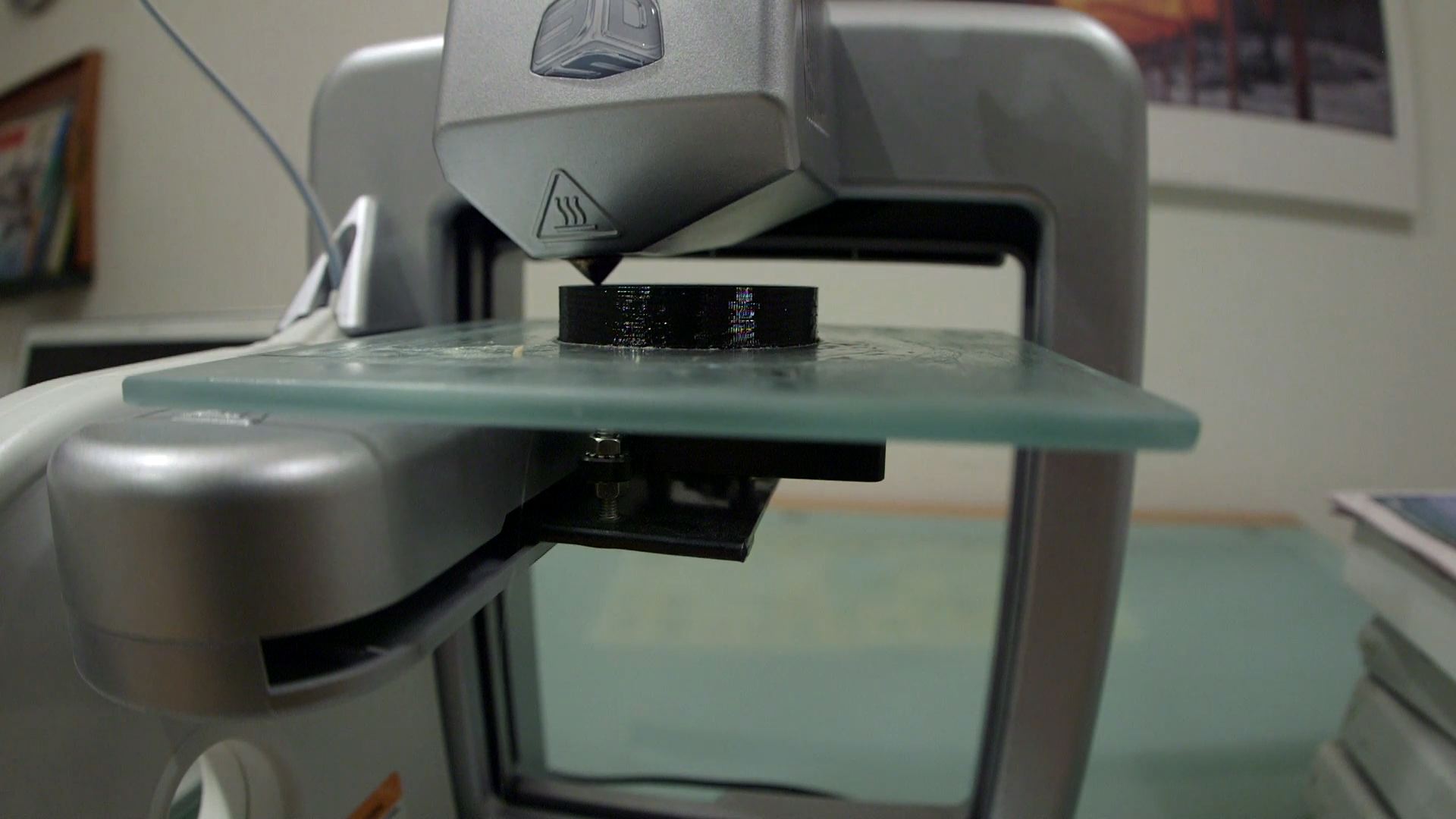 A family creates a full meal, this cup included, with a 3-D printer. Photo by PBS NewsHour

And so it went in shooting this story on 3-D printing. We all want Rosie in the kitchen pushing a few buttons to create a meal in seconds in the “Food-a-Rac-a-Cycle.” (Well, maybe not all of us, but I sure do.)

Rosie is in fact still a long way off, and I think the same can be said for palatable food extruded from a machine. (That is a phrase you will unlikely see on any pretentious menu.)

But maybe this is a generational thing. After all, when I was young, I was a fan of Ding Dongs, Jell-O and Cheez Whiz. Are they really any different than something with the viscosity of toothpaste that spits out of the nozzle of a 3-D printer? I’m sure science technology will come up with some way of making it taste great. It can’t be any worse than a Twinkie.

And the printers might have been an altruistic mission. 870 million people are chronically malnourished on our planet. As it turns out, insects are a good potential source of nutrition for people who are hungry. So what if they can be ground up, puréed and extruded by a 3-D printer? Would that be more palatable than eating a cockroach whole? Probably so. (I have eaten a cockroach and can attest to the fact that it is hard to chew and swallow the wings. Oh … and they don’t taste like chicken.) 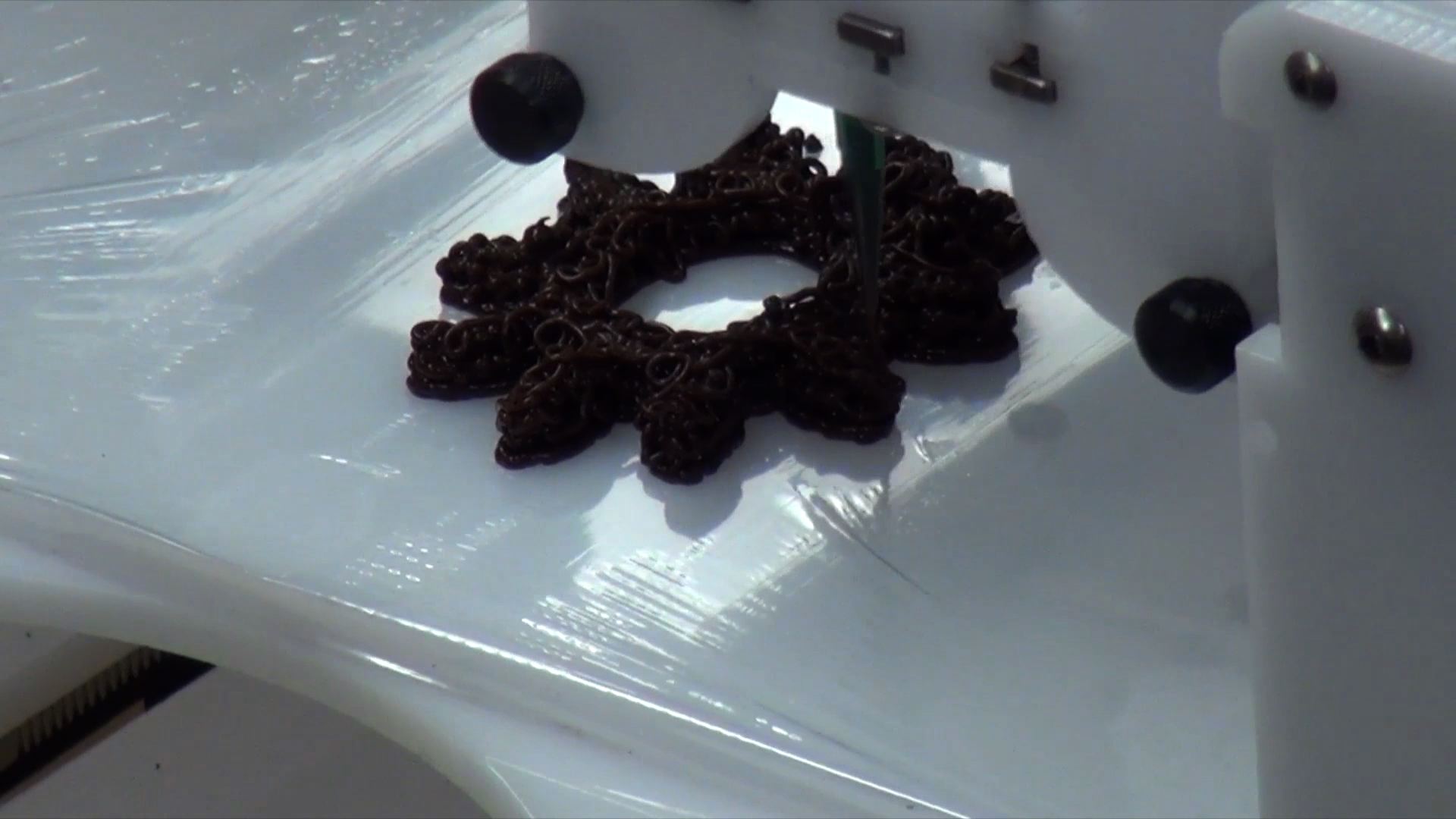 A.J. Jacobs and his wife share a meal shaped entirely by a 3-D printer. Here the printer churns out a chocolate dessert. Photo by PBS NewsHour

There is also a potential application for long-term journeys in space. It would be hard to stock enough of a variety of rations on a Mars-bound vessel to keep the spacefarers’ gastronomically engaged in their meals.

The powdered food well suited for use by 3-D printers, which lasts for decades, could be mixed and matched to suit the astronaut’s palate. (Incidentally, astronauts frequently find that the food they tasted and approve for flight on the ground no longer appeals to them once they’re in space. Apparently the realignment of fluids in our body in microgravity changes the human olfactory system.)

No, 3-D printers will never serve up a rare juicy steak, a baked potato or the salad the “Food-a-Rac-a-Cycle” can, but before too long, they might be able to produce “Earl Grey tea – hot,” as the Replicator does for Captain Jean-Luc Picard in the Star Trek movies.

William Hanna and Joseph Barbera were not scientists or engineers. But they sure knew what we all want from technology. In 1962, they set the bar for life in 2062. And today, designers of the future are still trying to hurdle it.